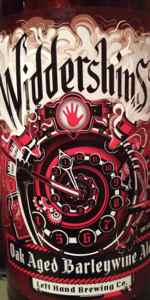 A - dark caramel brown with a little, soft, white head

T - bready up front followed by big fruit flavors: pear, apple, fig; some alcohol comes through in the finish

This is a decent beer though a bit fruity. I prefer a more malty Barleywine or perhaps a bit more hoppy. This wasn't bad by any means but the fruits dominated that flavor. I wouldn't turn this down though.

2007 batch. Curious, fewer reviews for this than I would have thought.

Poured into a small snifter. Cork came off with good pop...yeah, obvious bottle conditioning. Some very fine pieces of sediment. Plenty of foam, sunny golden-brown color. Truth be told, it looks like it could have been bottled yesterday.

In the aroma, a lot of sweet mandarin orange, rum, raisin, lavender and a hint of buttery biscuits.

Taste is surprising. It's surprising in that it doesn't taste that "aged" to me. The hops haven't entirely dropped out - there's still an orange-hop flavor, and a fair bit of residual bitterness. Orange and unsweetened raisin, just minor sherry notes if any. Some sweetness up front, but has a dry, bitter finish. Alcohol is muted to taste, but it still hits you like a ton of bricks. Pervasive hint of vanilla and coconut owing to the oak barrels.

Not bad, but I was hoping for something a little more obviously lush and "aged." This still packs some real kick. Maybe the aggressive bottle conditioning and hopping helped preserve this much better than I would have thought. This must have been a real beast fresh. Seriously, I think this could easily go another 3-5 years - I think I opened this too early.

Hazy and dense body, clearly full of protein and yeast which is acceptable for the style but certainly many do this style without it. I somewhat enjoy that look so I’m pretty happy. Reasonable head but the lacing I’m getting is only ok. Poured in a stone old guardian glass, which may not be ideal for lacing or retention.

Straight up caramel barely wine here and American has it can be. 2009 bottle so some hops have faded, but they are still here and noticeable. I don’t really pick up any characteristics from the oak, but I’m not overly surprised.

Citrus hops and caramel malt are really drowning out most of the other flavors. The back brings in some tannins possibly from the oak and a somewhat grape peel finish leaves me a touch unsure where this one is trying to go. There are some subtle notes that make me think of Thomas Hardy at time here when I ignore the hops presence which is pretty interesting. A slight nutty notes making me think for a moment about a somewhat fruity brown ale as well.

Alcohol is still present here and while cold is a bit off putting but as the flavors rise from warming that falls back. Well carbonated and rather dense beer. An extremely good feel for an American barley wine.

I was getting ready to knock this beer for a lot of flaws when I was sampling it fresh out of the fridge, but I have to say warming it up has really let a rather good beer come out. The oak impact is minimal and I believe it is mellowing the hops a bit and possibly fusing the flavors together a bit while adding some tannins and a light but of nutty/earthy over tones in the back ground. Or I’m just crazy and read that in another review and stole it. I’m honestly not sure as this beer has me somewhat perplexed. I saw some Arrogant Bastard like comments, and I have to say I get that. This beer getting near or past 2 years (I just have a 2009 year on here, no month that I see) the hops most likely have faded from sight so this isn’t Bastard, but the malt profile and the presence of the hops certainly does remind me of it in ways though certainly different experiences to drink.

Pours a crystal clear deep amber, with a perfect light tan colored whipped cream head. One of the best looking beers I have ever seen. I was amazed at the clarity of the beer considering its bottle conditioned. Smell is some raw brown sugar and charred wood. Taste is a hint of ripe bananas up front, with a creamy toffee middle, and a dry woody finish. The oak aging is nice, often times it is overdone. There is also a hint of flowery hops in the finish, just enough to balance. Mouthfeel is very creamy, nice low carbonation. Drinkability is very good, I would certainly get this again. The alcohol is nearly imperceptible, which is difficult to do in beers of this gravity.

Reviewing based on notes, from yesterday.

Poured from a bomber into my 8 ounce sample glass. Head forming appx an inch of tan. Soft spotty lace that eventually drops back into the beer. Hazy golden amber color, glowing bright when held to light, still showing haze.

Transcribed from notes taken 15 June, 2010 at the LHBC tasting room.

d - Almost seems closer to an English than an American-style BW. I could probably have 2-3 glasses, but the sweetness would get to me.

I believe I've tried this from a bottle and not been overwhelmed, but this is fantastic. Sort of a game for the palate, complex and flavorful, almost elusive.

Strong citrusy and piney hops in the nose. Malt backbone is detectable, but this is clearly gonna be on the hoppy side. Don't really pick up the oak here.

This is pretty good. The piney hops are there, the sweet malt foundation is there. The oak's in the finish, a bit musty. Alcohol's not all that noticeable. Nicely balanced. Not sure about the mustiness, though.

The mouthfeel is good if the tiniest bit thin. Plenty slick from the hop oils. Carbonation is subdued.

Smell is mild, hoppy and yeasty.

Taste is nice. I've been on a Barleywine kick this weekend. This is not as hoppy as the rest (Rogue and Sweetwater). Solid malts backbone, mostly sweet caramel. Somewhat bready. Hops and bitterness are there. Mostly grassy in piney hops. The oak aging really comes through in this one. Quite nice.

Drinkability is good. It's on the milder end of the spectrum as far as hops and bitterness go. It's not an all out assault on your palate, but there's just enough of all the good stuff to make this quite enjoyable. I'd buy this again!

Cellared for over a year then another 6 months in my fridge. No visible abv% on label.

First sip is a classic barleywine with a subtle tannic oak finish. The flavors switch from mid to back palate with each sip. Sweet fruit up front to Oak finish. The Widdershins doesn't come off as overly hopped and bitter. The malts and oak flavors fold over each other to hide the high abv%. It's stated that this is aged in Brandy casks, there is not much of a brandy flavor, maybe a touch, but more of an impression of clean white oak.

Happy to have found this beer and have tried it. Overall worthy of the purchase and redux.

Got this baby for free, fools. I work for a distributor out of Texas.

Aromatics are hops for sure. Not insane but apparent. Notes of vanilla and a bit spicy oak. Very subtle fruit notes. Light citrus if any.

Medium to full bodied mouth-feel. Long lasting lingering taste. Who needs breath mints when kissing the ladies. Just take a couple swills of this beer and you'll be on your way to a rollercoaster of love. Plus split the bottle with her and you will probably get laid. Knowing how most chicks arent used to high alcoholic beers, she'll get drunk easier. That is if she even likes the intense roasty flavor. Always have a six pack of Smirnoff Ice in the fridge for backup.


Widdershins from Left Hand Brewing Company
Beer rating: 84 out of 100 with 407 ratings