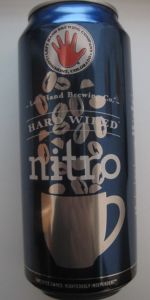 Pours black but not quite pitch black, ample head of off white foam, lacing is fine.

Taste is coffee, more like coffee than coffee grounds as it does taste as bitter as the smell. Dark chocolate, toffee, nice balance.

I like. Left Hand has a way with Nitro.

Poured from the pint nitro can into a tulip.

Pours dark brown (nearly black) and opaque with an excellent creamy head that lingers very well even for a Nitro.

Semi-sweet chocolate and coffee on the tip of the tongue meet some toasted grains, dark fruits, and nuttiness in midstream. Hints of earthy hop at the finish. Very well balanced. A good blend of lactose and chocolate sweetness and deceptively present earthy hops.

The brew is surprisingly dry in the mouth, and not as full bodied as expected, but neither of these things is a bad thing.

Nitro brews are normally not my thing, but LH keeps delivering on this approach.

S: Coffee in spades, some roastyness & a little caramel

Solid beer, the Nitro enhances this one

Much like their Porter, Milk Stout and Nitro Milk Stout, this beer is smooth, delicious, and easy to drink. Quickly becoming one of my favorite breweries.

From a tall nitro can, this brew is a dark, black liquid. The head is creamy and tan. Nice coffee and chocolate aroma. The taste is lightly sweet, with a cream-and-coffee flavor. Wonderfully backed by an incredible, velvety, luxurious body. Very enjoyable.

5 oz nitro pour. Aroma and flavor are smooth (not bitter) coffee, dark malts, and milk chocolate. Not complex but still quite tasty. Mouthfeel is smooth and silky. Very drinkable.

Poured hard from a can into a Guinness glass. The nitro slowly faded up to a finger+ of creamy head that stuck around for the entire drink. Not quite black, opaque, color beneath the off-white head. Smells of slightly sweet coffee, not too bitter. Taste is a bit mocha-like, not too bitter coffee with some chocolate flavor. Not a fan of many coffee porters/stouts, but this was really tasty. Light/medium bodied with minimal carbonation, good and creamy but a bit plain in the body. Overall, a very good coffee nitro porter.

13.65 ounce nitro can, best by 08/11/2019 stamped on the bottom of the can. Thanks to Brutaltruth for this one! Well, it's my fault for not drinking it earlier but at least it's been in the fridge for a while. Served in a nonic pint glass, the beer pours dark brown/black with about an inch or so creamy light tan nitro head that stuck around for a really long time. Good amount of lacing too. The brew smells like roasted malt, coffee and bittersweet chocolate. Taste is similar to the aroma, with roasted malt, coffee, cream, bittersweet chocolate, caramel and vanilla flavors. Does get better tasting as it warms. Mouthfeel/body is medium, it's creamy and smooth with a moderate amount of carbonation. Glad I got to try this, next time it will be a fresher can!

Can opened with a great growling sound. Beautiful dark brown-black pour with the nitro doing the job of some mesmerizing mixing going on at the top of the glass. Smell has some great chocolate and coffee notes. Taste is smooth rolling notes of chocolate up front followed up coffee that lingers on the tongue. Very easy to drink and nothing overwhelming about the flavors -- something great to have at anytime.

16oz can poured into a snifter

M- medium body with low carbonation leads to a creamy mouthfeel that continues into a silky smooth finish, high drinkability

The nitro aspect robbed this of some flavor; the mouthfeel is divine, but the taste is a bit boring. A good summer stout, perhaps?

16oz can, best by 08/03/2019. Thanks to my friend, Ken, for giving me a can to try. Good utilization of coffee to go along with the roasty stout flavors. Great velvety smooth texture with a dry finish. Easy drinker and I'd get this again.

Off-black pour with some aroma of coffee. Aroma is subdued, though. Creamy, silky nitro head to accompany the creamy, silky mouthfeel. Coffee, cocoa, and nuts. Slight bitterness in the end with a bit of earthiness and pine in the background. Wisp of smoke. Balanced and way too easy to drink. Props to Left Hand for another delicious nitro offering!

Man this looks good on nitro! Pillow foam layered to a creamy 1/2 inch mocha tint atop a very dark looking beer. Smell is mild but timid smooth coffee roasts with a good amount of creamer. Taste Smooth coffee, caramel malts and a good vanilla base with just a touch of acidic hops. Body is very creamy the nitro really does wonders!

Overall an exceptional beer experience one can get fairly cheap with these nitro cans!

Pint at the Brass Tap here in Baltimore. Can't decide between a cup of coffee, or a pint to accompany that omelet? This solid & smooth porter might be the answer.

T - smooth coffee to start. Then chocolate and caramel. Moderate sweetness with a bitter edge. No alcohol in the taste.

F - Very creamy, as with all of their nitro bottles.

O - I like this so much more than their nitro milk stout, which I find hella sweet. This is well balanced, smooth, and coffee forward, which makes it super easy to drink. Glad I have 2 more of these to enjoy.

my favorite addition to their nitro series unfortunately very hard to find around me. Very good balancing act between coffee notes, malt and mouthfeel from the nitro. I would drink this all the time if I could find it!

Flavor follows, plus chocolate up front. Building roast and bitterness.

I picked up a bottle of Left Hand's Hard Wired Nitro Coffee Porter for $2.09 at The Lager Mill. I've never had this beer before and I'm interested to see how it turns out, so lets see how it goes. 2017 Vintage. Poured from a brown 12oz nitro bottle into a imperial pint glass.

A- The bottle looks ok, it's pretty typical looking for Left Hand and it isn't too eye catching. It poured a nice black color that didn't let any light come through and it had a little over three fingers worth of slightly darker tan head that died down to a thick ring that stayed till the end and it left some nice patchy rings of lacing behind. This is a very nice looking beer, I have no complaints at all.

S- The aroma starts off with a medium amount of sweetness with a big black coffee aroma being the first to show up and it imparts a pretty roasted dark black coffee aroma and it's followed by some chocolate aromas that give it a little bit of a mocha like aspect. Up next comes a little bit of doughy yeast with a slight nutty aroma that leads into the malts which impart some light sweet malt, dark malt, roasted malt and slight dark fruit aromas. This beer has a pretty nice aroma, the coffee shows up nicely.

T- The taste seems to be similar to the aroma and it's a little lighter this time and it starts off with a slightly lower amount of medium sweetness with the malts being the first to show up this time and they impart all the same aspects that they did in the aroma and they go right into the coffee which imparts those same black coffee aspects that it did in the aroma, but it's just a little lighter this time. Up next comes a little bit of doughy yeast with a slight nutty flavor. On the finish there's a lower amount of bitterness with a little more sweetness with a coffee and roasted malt like aftertaste. This is a pretty nice tasting beer, but I wish the flavors were just a little more robust.

M- Fairly smooth, very creamy, a little crisp, velvety, on the thicker side of being medium bodied with a medium amount of carbonation. The mouthfeel is pretty nice, the nitro works well with this beer.

Overall I thought this was a pretty nice beer and it's a nice example of the style, it had pretty much all the aspects that I look for in a coffee porter and I thought the nitro worked well with this beer. This beer had nice drinkability, I could drink a couple of these, especially in the fall time. What I like the most about this beer is the nitro aspect and how well the coffee is highlighted, those are the highlights to me. What I like the least about this beer was that the flavor just wasn't a little more robust. I would buy this beer again when in the mood for a nice Nitro coffee porter and I would recommend it to anyone else looking for the same. All in all i enjoyed this beer and it was pretty much just what I was expecting from Left Hand. It's not a favorite beer from this brewery and it's a nice example of the style. Nice job guys, this is a tasty nitro coffee porter, keep it up.

Pours a black color with a foamy tan head that lasts quite a while. Aroma is coffee, chocolate and malts. Tastes of creamy malts, coffee and chocolate. Sweetness comes from brown sugar and vanilla. Creamy from the Nitro. Good mouth feel.

Poured into a becher pint glass, the appearance was a thick black color with a one finger white to creamy colored head that dissipated at a nice pace. Semi-clingy lace forms a nice film around the glass. The aroma starts with the coffee, bitter, full and roasty with a slight creamy sweetness coming in to play adequately. The flavor blends very nicely between the roast and the sweet with a sly bitter coffee underneath. Mild caramel tones far underneath. Sweet cream to balance. Nice blended aftertaste between all of those flavors with a slight sticky sort of finish. On the palate, this one sat about a light to medium on the body with a fair sessionability about it. Felt nice as a porter with a really nice smooth creamy sort of feel keeping the coffee bean roastiness slightly at bay. Overall, very nice coffee porter that I would have again.

Nice cascade turns to a black body with thick and creamy tan head. Great coffee smell and coffee flavor, and surprisingly full body for a beer with a 6% ABV.