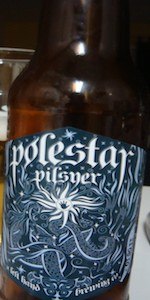 Notes: Once you have tasted a true Pilsner, you will forever walk the earth with your eyes turned skyward, for there you have seen the light, and there you will always long to return. Let Polestar guide you out of the wilderness, just as the North Star has guided explorers to their destinations and back home again. Light, crisp and elegant, pilsner is the true test of brewing process. Less is more.
View: More Beers | Place Reviews
Recent ratings and reviews. | Log in to view more ratings + sorting options.
3.68 by deg from New Hampshire on Apr 25, 2020
3.5 by PatrickCT from Connecticut on Apr 23, 2020
3.75 by mrcraft from California on Oct 16, 2019
3.97 by rooster1970 from Alabama on Jun 30, 2019
3.9 by Kolb from Montana on Apr 25, 2019

Pours a clear, pale, yellow color with a fluffy white head. Smell is cracker and lemon. Taste is citrus, lemon peel, cracker, and a hint of bitterness. Lighter body, flavor does linger a bit. A touch on the sweeter side.

Another great beer from Left Hand. I'm not much of a pilsner drinker - they too often remind me of cheap beers at college parties. But Left Hand has managed to create a crisp, clean pilsner that drinks easily and doesn't overwhelm you. I don't find it to be as hoppy as others claim. If you like crisp pilsners, definitely try this one out.

Good, basic pilsner. I enjoy pilsners, but can't get too excited about them.

L: Slightly yellow lemon color with a small white head and no lacing.

S: Light lemon and grapefruit rind, mixed with strong floral hops and a note of pine, some sweet malt.

O: This is a very hoppy pilsner, could use a little more balance.

Looks like a pils brew. Scent is of ?noble grassy funk hops with a grainy malt back. Maybe a bit understated but decent flavor , jeez am I getting blueberry in the mix. Just slight bitterness with some pils spice to the flavor mix. Add some mineral close to metallic flavors to the finish. This is deeper and has some complexity to it. I like these type of brews and this ain't too bad. Snappy carbonation and a crisp feel. I dig it.

This was poured into a pilsener glass. The appearance was a hazy crusty burnt yellow almost hazed over orange color. Thin white head glossing over sly the body. Sly ridged lacing here and there. The aroma keeps sweet grassy hops up front over sly biscuity malts. Light breadiness. Low bitterness, barely there. The flavor takes on the sweet bready/biscuitiness, grassy sweet to bitter hops. On the palate, this one sat about a light on the body. Sessionable. Carbonation feels good. Overall, good German pilsener that I could come back to.

Brief impression from a bottle:

A: Looks right for the style, with a clear yellow body below a fluffy off-white cap. Could offer more frothiness and creaminess and could be softer in appearance. A better defined body colour wouldn't hurt; this looks a bit thin/weak (if not watery). Not the most vibrant pilsner I've seen, but it's generally appealing and the head retention is pretty good (~5 minutes).

TASTE: Grassy and floral in terms of hops, bending American in its hop profile to its detriment. Pilsner malts lend this its simplistic backbone.

No off-flavours or booze.

It leaves much to be desired in terms of subtlety and depth of flavour, not to mention traditional hops.

OVERALL: Certainly an above average attempt at an American-brewed pilsner. Not as overhopped as Victory's Prima Pils, but at least Victory's expression of the style is memorable. This bends American in its hop profile, eschewing tradition and leaving the familiar bounds of German Noble hops in favour of a more spicy Mt. Hood hop flavour. With softer water and some Hallertauer instead of Mt. Hood, Left Hand would be off to a start in terms of improving this forgettable brew. As-is, it's drinkable and I do like it, but I wouldn't buy it over a great traditional German pilsner - or even an Americanized European brand like Trumer. In terms of Colorado brewed expressions of the style, give me Comrade/Bierstadt Lagerhaus' collaboration pils over this any day of the week.

M: light clean and fairly crisp not that dry.

O: it's not a bad Pilsner it doesn't distinguish itself much from the pack.