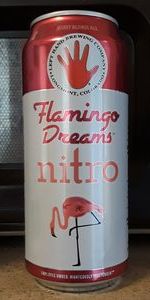 Appearance: It starts out looking crazy, like a strawberry milkshake, but as the nitrogen bubble cascade starts to fade upward it becomes this 3-color neopolitan-like mixture of raspberry red jello on the bottom, pink milkshake in the middle, then pinkish-white on the top. Eventually all that is left is the raspberry red color on the bottom which is hazy and dark, allowing some dark shadows through the glass. The head is short and creamy textured with some very sparse dimples at the surface.

Aroma: There is a mellow old fruit-like aroma in the room. Oddly as the nose approaches the glass the aroma doesn't get any stronger. It has a rather unimpressive aroma as a whole. There is a bit of a stale, old fruit character but not much else. It is similar to a fruit bar that is past its expiration that has been sitting out for a long time that has no real scent when opened.

Taste: Up front there is a wheat flavor mixed with some berry. The flavor gets a lot stronger as it reaches the middle of the mouth; a lot of raspberry and some strawberry with a much more pronounced wheat flavor.

Mouthfeel: It feels light bodied and very smooth with a tartness that only appears if it lingers on the tongue. No bitterness at all. The beer is pillow soft and feels like whipped cream. There is a light tartness in the aftertaste which is awesome.

Overall: The can states that this is a "BLONDE ALE WITH RASPBERRIES & BLACKCURRANTS ADDED" and that it is "4.7% ALC/VOL." It has a clear raspberry character which is nice. While it lacks in aroma the beer as a whole is very enjoyable. I could drink it again from time to time but it's probably a beer I would have one of and then move on to something else. I would recommend giving it a shot if you're building a mix-a-six or if it's floating in an ice chest. This beer would also be a good candidate for a beer cocktail given that it has such a nice appearance and that it isn't a very obtrusive beer.

L- Super interesting, pours white foamy but then quickly sahows the pink and strawberry coloring to it. Very tall stark white head.
S- Kinda weird ngl. Kinda sour, very berry heavy. Not bitter but weird.
T- Very interesting bright mix of berries. Light and airy with a large foamy head to break past. Highly unique but idk if it's something I'd drink again.
M- Smooth, foamy and thic at the top, but very airy and thin once you get to the body.
O- A very unique drink that I would recommend one try for fun. But again, idk if I'd ever buy it again, interesting in thr Left Hand Nitro 4 types pack!

Red to magenta color liquid. Hazy. The head is rich as to be expected from a nitro, but it's also pink. Minor spots for lace.

More berry than anything else, a bit sour and a little less sweet.

Smooth start but the "carbonation" is greater than expected. Lots of raspberry in the finish. Otherwise, this beer is fairly bland

I want to not like this beer but it delivers as advertised. Pours pink/purple with a thick pink head. Not much aroma but some berry sweetness. Taste is the same with berries dominant, nearly no bitterness. Feel is okay for a nitro, not as smooth as hoped, but definitely there. Overall, if you think of it as an ale, it’s meh. If you think of it as a tropical drink, it’s not bad.

Poured into some mug. The head just won't go away. Smells like cream and raspberries. Raspberries and currants dominate, as advertised. There is no hop bitterness and very little malt to speak of. The pleasant fruitiness, nitro smoothness, and light ABV combine to make this beer seem unlike a beer at all. It's a raspberry milkshake that just happens to contain alcohol.

I love me some nitro, but this one, not so much...

About the only thing I really liked about this beer was that it was a nitro, and even then it was a short lived experience, watching the nitrogen bubble up to the top. The smell and taste reminded me of a raspberry soda with a slight sour tang at the back end. Mouthfeel was somewhere in the middle of watery to creamy, though as it warmed it became more and more watery. Overall, though this is something fun to look at, it wasn't so fun finishing it off...

Interesting idea, and beautiful pour. The nitro plus the berries make the pink really pop and is super inviting. However the smell is a bit mild and one-dimensional, and the flavor though fun and a bit tart is not very inspiring. Refreshing overall, but wouldn’t get again and only tried since it was part of the nitro mix pack.

This smells like raspberry juice, berry candies, and some light tartness.

This has a light and subtle tartness to it, but it's certainly not a wild ale. The raspberry is more prominent, and due to the creamy artificial character of the nitro, you don't really get any of the base blonde ale. There's no real off flavors.

This is light bodied and very creamy, with a thin finish. This is how most nitro beers feel to me.

This is an intriguing take on a nitro can, but it's not something I necessarily need to try again.

Pours a pretty translucent pink with a slightly punk head. Smells like raspberries with slight hints of toasty malts. Taste is mostly of raspberry juice but it's more sour and dry- it's not sweet at all. It goes down easy. Not the best fruit beer I've had but still pretty good.

I was pleasantly surprised by this. A nitro fruited blonde ale. Nice feel. Very smooth. Not artificially sweet. Good fruit and tartness level. Just an all around easy drinking beer.

Flamingo Dreams is the first pink nitro that I have ever seen. It pours a stunning bright pink with a white foamy top. The beer is surprisingly light with a kiss of berry and tartness. Very easy to drink.

This is too sweet for my taste. It is not as smooth as I have tasted in Nitro, but it’s passable. Budweiser does a much better job at canning nitro, but this beer tastes better.

I think a bunch of Left Handers were having a safety meeting and someone said, "I know: dude, let's put a nitro widget into a fruity ale." The rolling pink foam that is the result of this hairbrained idea is Flamingo Dreams Nitro.

It pops out a foamy dark pink that partially but never completely subsides. The aroma is a subdued fruity. The taste is similarly not overwhelmingly fruity but nicely so. Balanced. It goes down easy, and you could drink them all day (I have only one can).

Recommended, as long as you know what you are getting into - a fruit ale.

A: Pours cascading pale pink to ruby head with a creamy berry yogurt colored head that settles to a firm layer and leaves some nice lacing.

S: Sweet berries, plenty of raspberry plus some other fruity notes I can't quite put my finger on, light tartness, and some slightly toasty crackery malt.

M: Light to medium body, mild carbonation as expected for a nitro brew, and lightly creamy.

O: I can't say I've ever had black currants straight up, so they're probably responsible for some of the things I'm picking up but can't quite put my finger on. It's a nice interesting change of pace. My only mild gripe is it feels a little thin on the back end.

16oz nitro can poured into a tulip

A- pours pink in color with a two-finger creamy white head with a pink hue, great retention long after the pour, leaves soe lacing behind

T- slightly tart up front with some juicy raspberry notes popping through, followed by notes of cream soda and a hint of vanilla. The finish gives some toasted malt with more raspberries on the linger