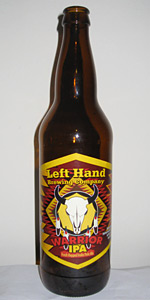 The smell got notes of caramel. There are sourish chemical flavours with some bitterness, butterscotch, dandelions and citric notes.

The powerful taste got lots of sour-bitter flavours. Do I notice some caramelized sugar? There are some lightly artificial/chemical notes as a complex taste of caramel sauce, butter and rye bread. The aftertaste is bitter with some lightly roasted malts, some beef gravy and banana candy. The finish introduces a mild flavour of bitter herbs.

The carbonation is medium to strong. The liquid is a little thick.

I found this beer very interesting and although the flavours were rich and complex, it never became unbalanced. As expected when it comes from Left Hand.

Mouthfeel is about medium, plenty of carbonation, a tinge dry, and pretty drinkable.

Overall this is a solid Belgian IPA, but definitely as much Belgian as IPA.

Sure enough, its one of those toffee and caramel ipas with definite c hop bitterness. Don't get me wrong, the malt bill is enjoyable, it imparts a certain earthy woody tobacco road kind of vibe in front of the hopping. But is that what we came shopping for ipas for? The alcohol is there, but not oppressive.

Left hand has been around since the 90s, and there recipes seem firmly entrenched there as well. Nothing bad about this beer, just kind of a relic at this point I guess, which is fine, most breweries stick with what brought them to the dance.

Reviewed by tillmac62 from South Carolina

Outstanding nose of orange and light pine over biscuit coupled with a bit of earthy spice.

Light body with a texture similar to that of water but coupled with an outstanding oily slickness. Superb carbonation with a bit of effervescence in the middle and a nice burst in the finish.

The flavor profile is very good. This is a hop flavor focused beer with moderate bitterness that is balanced with toasty biscuit and caramel. Like the nose, orange dominates with pine and spicy elements in the background. Along with moderate bitterness in the middle, caramel makes a strong appearance. The finish is semi-dry and a hint of alcohol astringency arrives over a lingering slightly sweet rind/pine bitterness.

Rated by Yancey82 from Pennsylvania

Reviewed by NickSMpls from Washington

Reviewed by gmoneyproductions from Colorado

3.97/5  rDev +3.9%
look: 4.5 | smell: 4.25 | taste: 3.75 | feel: 3.75 | overall: 4
22 oz bomber poured into a pint glass
pours a deep orange to amber with a moderate off white head somewhat cloudy initially then cleared and the head left quite a bit of lace on the glass
smell grapefruit citrus and hops
taste sweet and citrusy, hoppy and resiny with a distinctly dry finish and bitter aftertaste
feel crisp effervescent and very dry
i liked this beer but found it too dry to want to drink again

Reviewed by KYGunner from Kentucky

3.34/5  rDev -12.6%
look: 4 | smell: 3.75 | taste: 3.25 | feel: 3.5 | overall: 2.75
Not expecting such a red hue. Tawny with ruby highlights. Clean, white soapy head, all IPA-y. Nose, upfront, lots of crisp apples. I can smell the IBUs already. Glimpses of citrus and pine present, too. Slightly sweet, but hoppy. Warming up brings out more of a bready malt note. Hmmm, interesting IPA. Taste, it's balanced, firstly. The hops and malt almost seem to turn on and off opposite from it each other. There's a distinct woodiness running through it. Interesting hops used, providing a faintly fruity note, but then just putting the hammer down on the bitterness and lingers on the palette. Spicy, too. I wonder if there's some rye in this? Reminiscent of tobacco a bit, earthy.

Overall, not one I liked too much after it warms. Taste isn't as dynamic as the aroma and look might suggest. Some interesting hopping but I feel like that special hopping is kind of a waste if it translates into too much bitterness and not enough flavor. The flavors that do present are more on the earthen, herbal, tea-like side. Just doesn't do it for me as much.

Reviewed by Hop_God from California