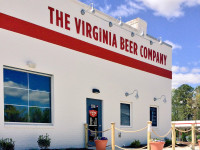 The Virginia Beer Company is a brewery + taproom + beer garden in Williamsburg, VA. The brewery was founded in 2016 by two graduates of nearby William & Mary, who were joined by a brewmaster out of SweetWater Brewing in Atlanta. Four year-round beers are complemented by a boundary-pushing rotation of limited edition beers including Experimental IPA's, Barrel-Fermented Brett Saisons, and Barrel-Aged Imperial Stouts, among many other diverse styles.

The great variety of recipes available at the Virginia Beer Co. taproom and throughout Virginia, New York, the UK, Europe, and Japan are made possible by a unique production model: a brewery built within a brewery. The large-scale, 30-bbl production brewing system is fully integrated with a custom built, 5-bbl pilot system that allows creativity and experimentation on a regular basis.

In addition to brewing quality beer, the Virginia Beer Co. team is dedicated to environmental sustainability and active philanthropy throughout the Commonwealth. We joined forces not just to share a passion for beer, but to create a community-based and philanthropy-focused force for good in the form of a brewery.

If a beer needs updating, please propose an edit using "Beer Tools" on the beer's page. Thanks!
The Virginia Beer Company in Williamsburg, VA
Brewery rating: 3.96 out of 5 with 312 ratings