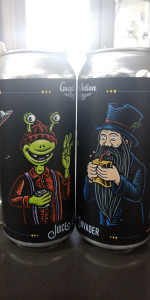 Notes: Juice Invader is a combination of two of our favorite beers. Galaxy and Mosaic hops collide in this interstellar meeting of friends.
View: Beers | Place Reviews
Reviews: 8 | Ratings: 32 | Log in to view all ratings and sort
Reviews by yesterdayfaraway:

L: bright pastel yellow but complete haze
S: sweet and dank at the same time. Yum
T: tropical sweetness throughout, but still has that slight dankness to make me want more
F: smooth and creamy

Picked-up a four-pack of cans at Kappy's in Norwell for about twenty one dollars. My fourth brew from these guys, underwhelmed by all, considering the price point. This was probably my favorite, a lot going on with the smell & taste, very dank & pungent, but just doesn't warrant the $. I noticed they had a stout @ $26/4 next to these. MA/NE has so many fresher, cheaper, & better options, I see these guys getting smoked in this market.

T: Follows the nose to a degree but has much bigger citrus aspect that wasn't perceived on the aroma. Quite juice-like, finishes with limited bitterness and mild astringency, clears palate quickly.

F: Medium bodied with lower carbonation, fluffy on the tongue with creamy feel on the swallow.

O: Very nice NE-style IPA, hides the ABV well and is quite tropical. Wish the taste matched the nose to a greater degree. But I'll happily have again.

Foggy as fart, like pouring a carton of expired Tropicana OJ in a pint glass. Smell is fresh cut pineapple, citrus, papaya (?). Taste is chewy, mild cheese rind funk, deliciousness; finish is super smooth, nothing left on the pallet; this beer is very effervescent, seems to be heavily carbonated - whatever, it works.

As usual, a white washed opaque yellow with a frothy pillow above that platers the glass.

Citrus forward fruity aromas with vanilla and rubber back drops.

Mango binds with orange juice, a dash of pine, and some burnt rubber.

Smooth feel, balanced, with a decent dash of bitterness on the end.

Another goody from GN, but the parts are better than the whole in their respective rights. Cheers.

Had on tap previously, but this is my first time from the can.
L: Pours that lovely bright hazy yellow appearance. 2 fingers of a loosely packed white cap that retained rather nicely. Abundance of residual lacing on the glass, which is bonus points in my book. Same with Ripe, this beer represents NEIPA appearance perfection in my opinion.
S: Tons of melon and stonefruit on the nose. Peach, apricot and nectarine come to mind first, followed by a melony citrus complex that I find rather inviting. Tons of grassy hop aromas coming off as well, with mild dankness. Bubble gummy on the nose as well.
T: I love the fact that I can distinguish the mosaic and galaxy hops in this beer. Both offer unique aspects that are readily detected in the beer. The mosaic brings a berry, mango and stonefruit flavor to the table, while galaxy ushers in an abundance of citrus and passion fruit flavor. There is a dankness to the beer that adds an additional layer of flavor complexity, and one that I think meshes perfectly with the juiciness that is mentioned prior. There is also a flaked oats presence to the beer adding a bready flavor, making me wonder if oats were involved in the brewing. Regardless, this is great.
F: Medium in body, light to medium in weight. Carbonation is spot on, and at that goldilocks level that I mentioned with Ripa. Not too high, not too low, just right. No abv detection. Soft, creamy and pillowy. Perfection.
O: Man, I am loving the juice bombs Great Notion is bringing. For me, this and Ripe are peaked NEIPAs. The 7.2 abv aspect makes this incredibly drinkable and appreciate it more. I would buy this again and recommend. I am very grateful to have tried. Cheers!

Ah, here it is... the 900th best New England IPA (as of this review)... wait, really? 900th best...? Jeeeeeeeez. This style has gone nuts over the past couple years. While I'm sure I could wax poetic about its growth, it seems the NEIPA is a style that is here to stay, and in comes Great Notion, all the way from the Pacific Northwest to Massachusetts, to return the haze to its original sender.

The pour on this is certainly quite a hazy dude. It's like a straw-colored, pillowy-soft-looking, plush, dense, opaque liquid. The head is nicely detailed and fluffy, though it does sink to about a half-finger pretty quickly, leaving behind a consistent ring of decent-looking lace. To my surprise, if I pay enough attention, some small, detailed carbonation activity is visible arising from the juicy depths.

This is a Galaxy-hopped IPA according to its can description (which says nothing about Mosaic as the listing here does, for the record), so that's how I'll be reviewing it. The initial nose is lovely; grapefruit-orange juice immediately, with a ton of ripe pineapple, mango, papaya, and passion fruit along with the typical dankness Galaxy is known for. Leafy-green notes and a tiny bit of green onion also come out once it acclimates a bit to being in a glass, but they're by far the less apparent aspects of this IPA. There's an aroma of sour peach rings, too, but I'm sure that mostly has to do with just how awesome Galaxy is + the hopping rates on order here; I'm sure it's not actually a sour beer.

Anyway, the flavor is much as I expected, and reminds me quite a bit of some Trillium stuff from before they changed their beer. Specifically, this is a lot like a cross between Galaxy Fort Point and Congress Street. The mellow stone fruit note combining with the intense tropical citrus flavors going on... just a combination that works really well. All that complex hoppiness in a really tight 7% package; hard to go wrong. There's a slight "hop candy" flavor here toward the end, and a little roughness once the whole can is poured in and we get some suspended hop solids, but overall this is pretty remarkably tasty and well-built. Something I would not mind having around more. The feel is a little oily but otherwise barebones and stylistically-accurate; palate-coating and saturated but with a non-intrusive malt profile. This is definitely a really good beer, and it's better than some bona fide New England-born hazy pales I've had recently. Grab it if you see it.