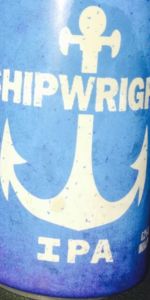 Got a four pack of 16oz. from a visiting cousin from Hackettstown, NJ, hometown for this brewery. This is a classic IPA - slightly cloudy amber color on the pour, not much of a head and fragile lacing. Aroma is pleasantly strong -- pine, hops and fruit. Taste is malt forward with grass, grapefruit and pine. Body is lighter than most IPAs, and finish is slightly bitter, common to the style. Very good overall.

Czig Meister takes your palate for quite a voyage with Shipwright. Like any pirate commandeering a vessel, Shipwright takes control of your taste buds and does not let go.

It pours a deep amber color with a long lasting foamy white head. The foam lingers and laces the glass as it falls.

If the look of Shipwright doesn't intrigue you enough then the scent surely will. It is bright and colorful. Full of fruit and sweet hops and pine.

The look and smell come through with your first sip. Shipwright has a great balance of hops and citrus but not too strong on either account. The hops hit you first and are followed by a light and crisp pop of fruit - orange/grapefruit/lemon.

This is more medium body for an IPA. A smooth feel with lighter carbonation. I do tend to prefer a hardier feel in my IPAs (and Czig definitely delivers in some of their other selections) but that is the only thing holding back this solid beer.

Czig Meister delivers a very solid beer with Shipwright. From the pour to the sniff to the sip - it delivers. It is unique its lightness compared to other IPAs of the like. While this makes Shipwright stand out from the pack it does lower my overall enjoyment just a bit. Still a very solid beer.

T'day (H, 19 September 2019) bein' the annual celebration of International Talk Like a Pirate Day, I decided to go with a nautically themed CANned beer for The CANQuest (tm)! Arrgh! What be a pirate's favorite ten (10) letters? R, I, I & the seven (7) Cs! Aarrgh! What the pirate's wench be like? She has a sunken chest & let him bury his treasure! Arrrgh! How much did the pirate turned farmer charge for his corn? A buccaneer! Aaarrgh!

From the CAN: Besides the anchor & its flukes, "Master Your Craft".

You CAN bet that I am the master of this craft & I demonstrated my prow(ess) with a Crack! o' the vent, followed by a slow, gentle C-Line Glug. This maneuver resulted in the formation of just under two fingers of dense, foamy, rocky, tawny head with excellent retention, leaving a load of sticky lacing in its wake. Aarrgh! Who is on Scullery Duty that gets to deal with this mess later? Me?!? Aarrggh! I pulled out me trusty spyglass to assess the situation further. Aarrrgh. Color be a murky, turbid Amber to Deep-Amber/Light-Copper (SRM = > 9, < 13), like we may have stirred things up with our twin screws so I signaled the helmsman to back down a bit. Aarrgh! Speakin' o' the Galley, our resident stew burner must be servin' up freshly-squeezed grapefruit juice. At least, that's what this smelled like on the nose! Aaarrgh. Mouthfeel were a solid medium, just the way I expect an AIPA to be. Aarrgh. The taste closely followed the nose offa the plank, aarrgh! It were like I were enjoyin' a glass o' grapefruit juice! They must think me a scurvy dog t'be foistin' such a beer on me, aarrgh! Well, the joke's on them, in that case, aargh. This be just the sort o' thing the sawbones be prescribin' for me as an inveterate hophead, aarrgh! I don't like to smile in front of the crew, lest they think that their skipper's goin' soft in the noggin, but this was my cuppa grog, aarrgh! Finish was as dry as the time we were becalmed in the Horse Latitudes, aarrgh! It may not be for every landlubber, sandcrab, scow master or bilge rat, but for this ship's ChANdler, it hit the spot, bucko! YMMV.

DATE:January 25, 2019... OCCASION: having watched a disasterpiece of rec basketball proportions, time to unwind with a beer that, sadly, I thought I had reviewed a while ago... pours a thick, burnt sienna body dense enough to conceal most of its carbonation... the head, on the other hand, proudly displays it liveliness, with a thick, clumpy consistency that gives the impression of staunch cream... bright citrus--orange, lemon zest, light grapefruit--work with herb garden, and pleasant bread malts to produce a soft, alluring aroma... not as strong as the IBUs suggest... a creamy, thick, buzzing mouthfeel front-loads with hop intensity, while its end is smooth, fulfilling and nicely balanced... while it drains, a curtain of lacing encloses the glass completely... this strikes a great balance, encouraging each sip with a resinous, citric profile that quenches thirst as it enlivens... in fact, its mellow presentation of its hops is what makes this so worthwhile--a sessionable IPA that is almost a throwback to when IPAs were neither overly alcoholic nor hop bombs, but strong on its own merit and almost sessionable....

Canned on 3/14. A nice deep/burnt orange color, opaque. head is creamy and leaves a nice layer of foam on the surface, a ring around the edges and strong lacing all the way around. Very sweet aroma, smells like peach rings and candied orange. Taste is malt forward but there are hints of grass, grapefruit and pine. Carbonation is spot on with a lighter than average body, slightly bitter aftertaste. I am happy with this one, a good traditional IPA.

Enjoyed this from the can while trick or treating with the kids at the campground. Citrus aromas abound (grapefruit) and a great balance of hops. Easy drinker. First beer from Czig (and I live 20 minutes from their brewery... shame on me). Definitely a keeper.

Had a pint of this in the Newark airport Terminal B Saison Bar_113_0 yesterday. Delicious! Looked like it was hard to pour, but maybe the barmaid had the tap valve open too much, or the keg was too charged. Once it settled in the shaker glass, the inch head may have settled a bit too quickly, but smell was beautifully malt fruity, taste also like the smell mating hops and malts with just a wee bit too much syrupy sweetness for my palate. Most excellent mouthfeel: unctuous, full, with long-lasting bitter aftertaste the way I love it. Lacing was real pretty, as was the continued fine champaigne-bubbly fizz coming up through a 15-minute airport layover made happy by this ale. I hope to find some of this IPA in Ithaca today to try it again with a better pour in a better IPA glass. This Brasserie, by the way, had truly fine jazz music playing when I was there; if you're in Terminal B at EWR, for sure you must try this IPA!

Based upon the color alone, I expected The Shipwright to be more like a British, malt-forward IPA in taste, but it may have struck a beautiful balance that will please both hopheads and malt mavens. At 6.2%, it's certainly sessionable enough, and its mouthfeel makes for a smooth drinking experience. Would pair well with a wide variety of foods, too. Slightly bitter finish reminds you it's an IPA. A good choice if you like your hops and malt playing even.

L: 2F head, good retention, with some lacing and a fluffy white cap and ring. Beer is a semi-hazy deep bronze. Actually looks really nice, like Pliny the Younger.

S: It does not smell like Pliny the Younger. Citrus and lots of earth and pine. Malts forward now at nearly 8 weeks.

T: Follows nose. Short initial burst of citrus followed by a fair amount of malt and a piney, resiny finish that is slightly bitter. Very decent IPA for what it is. Wonder what the difference is fresh.

O: Perfectly fine IPA from yet another new NJ brewery.

Pours dark amber with a 3/4" white head that lasts. Aroma is hoppy, oily, floral. Taste is hop bitter with good malt sweetness to balance. Hop is the dominant taste, but not overpowering. Feel is good, smooth and coating finish. Overall, at 6.2%, it's an easy IPA to recommend putting few back.