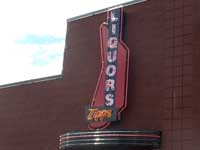 View: Place Reviews
Reviews: 55 | Ratings: 96 | Log in to view all ratings and sort
Reviews by fragilehearted:

OK - was shopping here for some souvenirs to take back to Texas, & I went here solely b/c of the reviews here. And I am VERY grateful they didn't disappoint! So I figured I'd say some nice stuff.

It's a liquor store, so tons of stuff I wasn't going to look at anyway, but hey, if you're in the area, they look like they'll get all your drinking needs met. Was easy to take the rail+bus to get here. Which is good b/c it was freeezing out!

Tons of regional brews (Surly, Tyranea, Bell's, plenty of others), which was what I wanted. Lots of other US craft beers & Belgians too, though I didn't pick up any - not what I was there for. They even had a special area w/ some aged beers that were recently re-put out for sale. Bombers, sixers, & singles already broken up. They were also very eager to break up any sixer that I wanted broken, which was very nice! I asked a girl working there for help, and she gave me a few more recommendations after I'd already made my initial selections.

Prices were great. Markup on singles was truly not that much considering the quality of the beer.

And service was great. The girl helping me was friendly and helpful. I told the staff I was taking it home in a checked suitcase, & they let me electrical tape & bubble wrap my beers & pack them up right in the store on a separate counter that wasn't being used.

I'll definitely hit them up again next time I'm in the area. =)

Good selection for sure. Was glad we didn't travel as far as we had to get there and then show up to a little mom/pop shop with 15 items! This is far from it. Service was great and best thing was they had awesome music playing while you're shopping! Very good to put you in the mood to spend your beer money.

Great selection of Minnesota beers and a knowledgeable, helpful staff.

One of the best liquor stores in MSP. I was really impressed by the general selection and even more by the selection that they recently unveiled during their cellar sale.

They have a massive selection but they do not always watch their stock and some of their stuff can get old - a three year old bottle of Uerige is going to taste like wet cardboard no matter what.