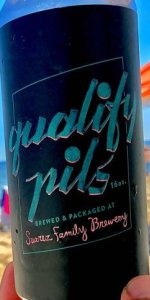 Clear light yellow with a dense white head with good retention and lacing. The nose is crisp and hoppy, intensely so with a strong floral, perfumey and bitter lemony hop character. A clean, water cracker base malt with minimal sweetness is present. The palate opens clean and bitter with loads of hops, floral, almost whole leaf character present with a real resin depth. Lovely texture. Cracker sharp malt character, dry as a bone with a mild mineral character. Drying, mildly floral and oily finish. Excellent.

Suarez Qualify Pils, rated #4 on Beer advocate for its style

4.03/5  rDev -4.7%
look: 4.5 | smell: 4 | taste: 4 | feel: 4 | overall: 4
Poured from a 16oz can stamped “CANNED ON 03.02.22 DRINK BY 07.13.22” to a Pilsner glass at fridge temp.
An obligatory super-white 2-inch head sits on top . The body is clear, light gold and nucleation bubbles rise hypnotically.
Aroma is grassy and light.
The taste is clean with hops and malt both playing together well. The malty biscuit flavor is in the front of the taste and the hops finish.
The mouth feel is medium-light. This Pilsner does not have the slight oiliness I have sensed in other German pils.
A fine execution of a style that give brewers nothing to hide behind.

4.49/5  rDev +6.1%
look: 4.25 | smell: 4.5 | taste: 4.5 | feel: 4.5 | overall: 4.5
Sampling this 16 oz chilled can poured into my .5L mug.
The beer pours a bright clear golden color, with bleached white fizzy head of about 1.5 cm. This foam fades to a thin edge layer soon after the pour. This edging does leave scattered lattice when I drink or swirl the mug.
Aroma is is biscuity malts and a bit of lemon mixing with some grassy hops and a bit of floral note too. Nose fits.
First sip light and crisp body with fine and tingly carbonation. Drinks really easy and my glass empties fast.
Flavor is a bit of biscuit and bready then again some lemon and the beer moves to some bitey rindy hops and a dry finish.
Abv hidden and my glass is empty. Very nice pils! Glad to have had this can.

Super drinkability, top rung Pilsner > most I had in Germany

4.16/5  rDev -1.7%
look: 3.75 | smell: 4 | taste: 4.25 | feel: 4.25 | overall: 4.25
This is a good, fairly traditional southern German-style pilsner. All the right notes are there, and played with enough subtlety that a few half-liters of this could easily be enjoyed at a sitting. Everything is subtle overall, but not to the point where it's missed unless strained (and imagined) for. Somewhat below fresh German pilsners in Germany, but at least in the same league.

Pours a white foam that has longer than average retention, fading to a thin ring around the perimeter of the glass. Lacing is good, not great, with some blotches/patterns/dots on nearly all sides of the glass. Body is a very pale yellow color, with light bringing out even paler yellow hues. Transparent.

Aroma of lightly lemon-citrus-like hops, mild peanut/grape-like lager yeast character, hint of sulfur, and curiously, a touch of blueberries that fades as the beer breathes.

Beer is medium-bodied, with carbonation of fairly low intensity, resulting in a lightly foamy, mostly smooth, easy-flowing mouthfeel that works well for the beer and style. Closes very dry, with light stickiness on lips.

The nose was really crisp and bright. Lemon notes came through strong. Lots of wet hay as well. There was a snappy, crackery malt quality too. Dry, powdery, lager yeast notes were also apparent. Hint of graininess.

The flavor profile was similar to the nose but hoppier than I anticipated. Big lemon presence up front. Good dose of cracked wheat and graininess. More hay-like notes again. Grassy hops appeared in the center. The hops crescendoed on the back end and the finish, turning quite spicy and bitter.

Medium bodied mouthfeel. Fluffy on the palate. The liquid contained a fine, moderate effervescence that seemed a touch understated for the style.

Qualify Pils is supposedly Palatine Pils slightly hoppier brethren, but they taste nearly identical to me. Both are solid beers though nothing I would actively seek out.

A- A clear golden straw with a two finger white head.

Sulfur, dough and grassy hops in the nose.

A little dough and kiss of sweetness up front, followed closely by firm grassy bitterness backed by sulfur in the finish and aftertaste.

Medium bodied with the perfect, lively zip from the carbonation.

Great mouthfeel and aftertaste in this one. Deserving of high praise, but a lot of breweries are catching up.

Aromas open mostly clean with notes of moist cereal grain and dry biscuit.. Aromas open up to include hoppy notes of dewy grass and earthy spice.

It’s unbelievable how clean and quenchable this is during the opening. Smooth yet semi crisp malt flavors of cracker, honey and biscuit impart a moderate sweetness. Very well balanced with a slight edge for the malt at first. However, some really tasty grassy and earthy hops spices take over the palate midway, imparting a smooth bitterness and a touch of citrus.

Medium bodied with a smooth, yet, semi crisp mouthfeel. The finish is dry with notes of earthy spices and a touch of lemon. The carbonation is moderate to even slightly gentle, however, it seems to work.

Delightful Pilsner. It is sublime and so tasteful. The balance, cleanses and simplicity are amazing.

4.49/5  rDev +6.1%
look: 4 | smell: 4.25 | taste: 4.75 | feel: 4.25 | overall: 4.5
Look - pint can purchased at the brewery and poured into a standard pint glass. pale yellow in color, slightly cloudy, a two finger head with above excellent retention, especially for a pilsner.
Smell - cracked malts and light peppery spiciness, with hints of citrusy hops in the background. the smells are all subtle but balanced, and is very pleasant.
Taste - hop aroma, including citrus and some grassy flavors, and bitterness are the first to hit the palate. this is followed by a strong wave of malts. the finish is clean and perfectly crisp. pretty damn perfect.
Feel - light bodied, high carbonation, and average on ABV at 5.5%.
Overall - Palantine Pils's hoppier cousin. I have a slight preference for Palantine, but both are world-class pilsners that each has its own merits, and both are among the best pilsners I've ever had in my life.

Wow! Wonderful aroma! Clean and bright, bready and hoppy, smooth and inviting! The aroma is nothing less than stunning for a pilsner, up there with the absolute best in the style. Lightly peppery, equally delicate citrus, rye bread, crackers and white bread, pine, bark.

Similarly smooth on the palate, with a clean, simple, moderately bitter and grassy up front taste. Malts follow behind, biscuity and crackery, dragging behind mostly neutral hop tones of pine, bark, grass, and light citrus. Earthier on the back third, with just a dash of the pungency that pilsner malt can bring to the table.

Lively and crisp, but with a slickness that clings to the throat, and prevents this from becoming a really crushable brew. Which is a good thing: hop oils lightly cling, leaving a pleasant aftertaste, and encouraging but not demanding the next sip.

This is a really good pilsner, and exactly the kind of "light" beer I'd love to have available locally. Sometimes you're just in the mood for a bit of a throwback - a beer-flavored-beer, so to speak - and this one knocks it out of the park. There's not a stray tone to be found anywhere.