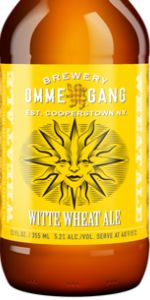 Notes: Witte is our version of the classic Belgian wit or "white" ale. Witte, which is actually Flemish for white, is brewed with malted and unmalted wheat, orange peel, and coriander - offering a refreshing style that showcases the Belgian talent for brewing full-flavored ales that are also light and balanced. It is pale straw in color, slightly hazy from the yeast, and topped with a huge white, fluffy head.

Witte is pleasantly light on the tongue, balanced between malt and wheat sweetness. Hops and spice with a subtle clove note backed by flavors of lemon and sweet orange give way to a dry, crisp, refreshing finish.

Poured from a bottle at 40 degrees,

Compared side by side to the standard Hoegarrden: This one has more of a citrus profile. Definitely more orange. Less lemon though. Less belgian yeast presence. Slightly bigger bodied and more carbonated.

Overall, this is a classic representation of a witbier. I sense more of an orange citrus than belgian yeast.. Not too yeasty as expected. A nice offering from Ommegang.

A nice thick, slow to subside, off-white head, a little lace, and a hazy yellow color. Aroma is yeast fruit, spice. Flavor loses the spice and there is a nice mild wheat flavor along with the fruit and carbonic tang & a hint of sweet. Very clean and refreshing. Nice brew.

Light hazy yellow with big white head that didn't stay long but draped some lace on the glass all the way down. Wheat and yeast competeing for the lead in aroma, with orange peel and spices in a back up role. Bready taste with some tartness. Very dry and refreshing. Another great one from Ommegang!

Pale gold in color and completely opaque. It's like a neon yellow in the light; kinda weird. Pours with frothy white head that dissipates quickly to form a thin barrier on top. The bubbles seem like they want to stick to the glass, but the low viscosity of the beer pulls it down into the drink. I get pale malt up front with lemon and spiciness following in scent. I was expecting a bit more of a kick in a wit. I get a lot of pale malt on the tongue with nearly none of the wheat described on the glass. The citrus is undeniable, and a bit annoying after a while. I get mostly lemon, despite the claims of orange peel on the label. It stays on the front of the tongue, but some of the malt lingers with it in an attempt at balance. The light fruit flavor has some spiciness towards the end, but it's a bit muddled in the tang. The beer is easily drinkable and not very heavy which is nice, but not normal for the style.

Speaking towards my personal preference, I'm torn. On the one hand, I like that it isn't a normal wit in the sense that it is light. On the other hand, it's overly tangy. In the end, evil outweighs good and the tagniness is too overbearing. Get back to the chalkboard, Ommegang. I expect more of a Belgian owned company.

Nice spicing, with notes of coriander, sweet oranges, caramel and butter toffee. I am a sucker for a good white beer but this didnt quite do it for me. I prefer Allagash White and SPH Double White.

I poured a bottle into a pilsner glass.

Appearance- Pale yellow color with a fingers worth of foamy head. Fair amount of runny lacing.

Taste- Banana, coriander, wheat malt, and a hint of citrus.

Overall- A very enjoyable beer. This would be great on a hot summer day.

Look: It is a cloudy yellow with white head that produces Belgian lace.

Smell: The aromas contain fruity esters, lemon, vanilla, close, spices, and a peppery note to it.

Taste: There are flavors of fruit, lemon, vanilla, spice, clove, pepper. There is a slight bitterness with a moderately sweet overall flavor. The wheat flavors combine well with the other elements.

Feel: The beer is moderately light with a light bitterness, It has a somewhat dry finish with the fruity esters lasting long into the finish.

Overall: This is a good example of a witbier with a complex combination of spices and wheat along with the fruity esters.

This beer was served in a Ommegang Witte glass (very interesting looking) at Monk's. Not much head to speak of but a good bit of carbonation. It had a beautiful orangish color. The nice citrus flavors are present throughout and in the smell as well. Very refreshing. Not too many spicy Belgian yeast esters compared to other Belgians, which I like better for a summer beer. This gets high marks for its drinkability. If you like the style, I would definitely grab one of these.

Pours a cloudy, yellow-orange with a two-finger white head. A little residual lace is left behind. Smells of oranges, lemons, sweet malts and coriander. Sweet malts, lemon and sugar-covered grapefruit to the tongue. A bit of orange peel chalkiness in the medium mouth-feel. Has a creamy middle with a dry ending. Outstanding Witbier right here.

Appearance: A little light for my taste or perhaps I'm just a little out of practice with the style, the head however was intially weak and didn't stick around long with no lacing.

Smell: Delicious sweet orange peel, and coriander, just a bit stronger and it would be a big hit.

Taste: Delicious though a little weak, like everything else about the beer, nothing off here, just not enough of the good stuff. I could say maybe a little more wheat malt and flavors besides citrus would be welcome.

Drinkability: You could drink this like water, but that is both the good and the bad.

Got a 4-pack of this for Christmas, where it was bought by a close friend directly at the brewery itself. Pretty stoked to be checking this out.

Appearance: Pours a nice hazy, lightly colored yellow that reminds you of a lemon. Nicely-styled wheat. Produces a nice 1 1/2 inch head that stuck around.

Smell: Has a aroma full of grain and sweet malts. Noticed a hint of orange and lemon extracts. Light hint of fruits possibly.

Taste: The first taste is a rush of wheat flavors. The lemon flavors stick around and no way is it overbearing. Actually balances out everything quite nice. However, I feel the only thing that may hinder it from me enjoying it more would be its somewhat grassy flavor, but nothing that would kill it. Quite enjoyable overall, but nothing that sticks out of mind.

Mouthfeel: Has quite a light body with moderate carbonation. Went down nicely

Overall: Upon first taste, to be quite honest, I wasn't expecting anything out of this world. It was a nice beer to begin with. If only I could enjoy Wheat and Witbiers more often, I think I would be quite fond of this brew. I would recommend this beer to a friend if they were looking for a nice summer beer to enjoy on a cool summers night. I guess this beer was nice to enjoy on a cold December night HaHa. Cheers!

Hazy light yellow beer, with light foamy head. Retention is really poor, and the lace barely sticks to the glass.

Yeast prevails in the aroma, with a backing of spices - coriander and orange peel, check. Light wheat grain sweetness, along with an ester or phenolic presence that's too faint for me tonight.

Tartness of flavor is quite crisp, although also a bit slick. Decent body that's just about right for a wit, the yeast is chalky and upfront to me.

It's not a bad beer, just perhaps needs a tweak of recipe. It wasn't quite what I expected - it's not that I was disappointed by the Witte, just underwhelmed.

A: Cloudy, somewhat lighter yellow than expected, initally a decent head that reduced much too quickly leaving no lacing nor cap.

S: Aromas are enjoyable and Witte like. When the head is there, I caught some lemon rind, moving more towards coriander and later a bit of blue cheese?

T: Not exactly complex, but it balances well with an enjoyable play of spices and citrus. The thing that makes this witte fantastic though is the strong lactic twang on the tongue that keeps it constantly fresh on your palate.

M: Crisp and sharp on the tongue with that lactic bite makes it very nice.

D: I'd hit it again, and again, and again... (Edit: After having the 2nd glass 1+ hour later, with a touch more warmth ~55F, the lactic nature is overpowering and unpleasant. If this had been my first experience with the beer the rating would have been lower)