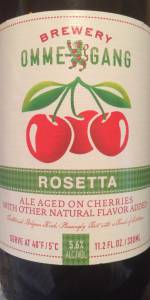 750 mL crown cap bottle from the LCBO; best before Apr 2022 and served slightly chilled. Never reviewed a real oud bruin before, though I have enjoyed the krieks I've tried over the years.

Pours a clear copper-brown colour with ruby red highlights; it's initially topped with one finger of frothy, buff-tinged head that falls apart within two minutes or so. A soapy, sudsy collar and bubbly film continue to grace the surface afterwards, with a small amount of lace - I haven't had all that many Flemish sours (red or brown), but this resembles the ones I've tried. Sweet black cherry and sour cherries on the nose, with hints of sugar and light vinegar; not a lot of funk, but there are suggestions of vanilla and cherry pit.

Very nice, mellow sour, though it's honestly not all that sour IMO. Mild backdrop of caramelized sugars and doughy malts, with sweet black cherry flavour dominating at first; it transitions more toward sour cherry on the back end, with hints of vanilla, and very light acetic/vinegar sourness dissipating at the finish, concluding with sweet cherry juice in the aftertaste. Medium in body, with relatively lively, fine-bubbled carbonation that softly tickles the palate continuously with each sip; feels smooth in the mouth, and surprisingly crisp/drinkable for a Flemish-style sour. I was a little worried that finishing the whole bottle would be tiresome, but the low sourness, moderate abv and high sessionability quickly alleviated that concern.

Final Grade: 4.08, an A-. I still don't think I can say I've reviewed a real oud bruin, as Ommegang's Rosetta is blended with kriek lambic, making it a derivative hybrid of the style at best. However, its cherry flavours are simply delightful, and totally authentic - this is a beer brewed for cherry beer lovers, first and foremost, and I think anyone who fits that description would enjoy this beer (even if they're not too keen on sour stuff in general). I haven't seen this around here in a while, but I'd pick it up again if given the chance.

Had on tap. Mostly opaque reddish brown appearance with a khaki head and light bands of lacing. Smell and taste are clones: big cherry with light vanilla in a lower depth oud bruin with lacto and faint spices. Flashes of cherry coke honestly. Feel is playfully sour with faint darker oak supporting in a medium body, carb is sneaky high. I like it though but not sure I need to have again given how limited the depth is.

A very nice Belgian (actually brewed there), canned in the US by Ommegang. This beer is a dark red, with a modest head. The really nice thing here is the flavor: it's in the same ballpark as the beloved Duchesse de Bourgogne, but in my opinion the balance between sweet and sour is better done. It's not as overtly sweet as the Duchesse, and this mild sweetness melds more smoothly with the quickly emerging sour note. And then there is an accompanying subtle cherry note as well. Highly recommended, especially given the price, which is more reasonable than many Belgian imports.

This is pretty solid after learning it's a blend, the can didn't seem to specify that. Ommegang has a harder time selling here at least where I work, I wasn't as in to 3 Philosophers as I'd hoped but this was pretty good. Wish it had more cherry.

Poured from a 12oz. can into a A Tout Le Monde glass. Pours a deep red-brown with a white head that dissipates quickly. Smells funky/sour. Tastes of sour cherry with malt, wood, and vinegar notes. Not an everyday beer, but I see myself buying a 4-pack a couple times a year.

Poured from a can into a tulip glass. Color is a crimson red with a thin white head. Smell is strong sour cherry with some dried fruit sweetness. Not as sour as anticipated. Very well rounded with the tart cherry balanced out with a malt sweetness. Medium bodied. Tart and tingly from carbonation on the finish. Overall, very enjoyable. Often sours can be tart to the point that one is the limit, but this is potentially sessionable.

Sour beer, not too tart. Cherries to the nose and cherry flavor upfront. Some carbonation. Easy to drink.

A - Dark red pour with some clarity and soapy pink lacing.

S - Tart sour cherry on the nose with subtle sweet malt underneath.

T - Cherry tartness from start to finish with some lingering black cherry on the back end.

M - Thick and juicy with light pricklies on the tongue that give way to a soft finish.

O - This is a fantastic beer. Highly recommended!

Best by 3/3/23. 12oz can poured into a tulip. Pours ruby with some clarity; creamy off-white head that falls slowly leaving great thick retention and sticky lacing. The aromas have hints of tea leaves and dark fruit along with some subtle vinegar and funk notes. Some malts. The flavors are really nice. Lots of cherries leading the way. More vinegar and funk notes. It's sweet and tart, but it's balanced and not over the top at all. Yeasts and malts do their thing. Alcohol goes unnoticed. Mouthfeel is nice. It's medium-bodied with active carbonation. It's sharp, fluffy, creamy, smooth and easy to drink.

This is a really nice brew. I'll admit that after all of these years I still never went through a "sour phase". I'm probably not the best person to give thoughts and opinions on the style, but I really do like this. I've always been a big fan of Ommegang and they didn't disappoint as usual. Well done.

Smells of sour cherry from a distance. Smells tart and strongly of cherries. Scent of wood and ash. Scent of allspice.

Starts out sweet and sour cherries with a vanilla after taste. Tastes tart but not exactly sour. Taste of pie crust and wood. Tastes like a Belgian Fruit Lambic.

Overall not a bad ale.

Aroma of tea, cherries, faint sweetness to it.

Taste is tart with a distinctly black tea like flavor also cherries.

A bit funky. Was expecting this to pour red. Good beer none-the-less.

S: slightly sweet funk with a hint of cherry in the background;

T: almost no flavor for a moment, then a nice funky cherry that lasts through the finish;

12 oz can from Harvest Market.
Electric Ruby in color with a pink tinged head that persists. Cherry bready light lactic nose and flavor. Pretty tasty Flanders like cherry beer but seems like it could use more lactic tartness almost like it was dumbed down for the masses.