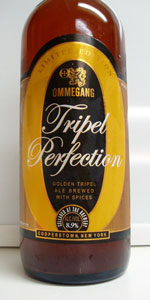 Notes: Ommegang's brewers spent several years refining their ideas of what a "perfect" tripel would be. In the original style, a Belgian tripel is a golden ale, from 8.5% to 10% ABV, with fruity flavors and aromas coming from the yeast. Tripels are simply brewed, but with great attention to detail. Ommegang Tripel Perfection goes beyond the exquisite attention to detail and adds spices to subtly enhance aromas and flavors. The result is a fine ale honoring Belgian brewing tradition, while also expanding on it in the new Ommegang tradition.
View: More Beers | Place Reviews
Recent ratings and reviews. | Log in to view more ratings + sorting options.
4 by Kurzman from Rhode Island on Mar 03, 2019
4.26 by Jstarr2517 from Connecticut on Feb 24, 2019
4.56 by ak010101 from New York on Feb 04, 2018
4 by OompaMentor from Georgia on Jan 05, 2018
4.15 by LinksusMaximus from New York on Jan 05, 2018

Beer poured golden orange with a nice white head that has some decent hang time.

Nose is fruity esters and a large European malt bill.

Taste is apples and pears over a large malt bill. Finish has adequate noble hopping to balance things out nicely.

Overall a very solid brew, glad i was able to try!

Could not find a best by date on this one

Mouthfeel - medium bodied, lower level of carbonation, sweet upfront from the citrus, back end is a bit boozy, finish is a bit unrefined

Overall - decent tripel here, not sure about a re-visit, though. So many better examples especially considering full asking price.

Overall: A very heady Tripel with a rich, efflorescent, spicy belgian yeast characteristic supported by dry, creamy notions of sweet, floral and fruity esters. I would absolutely buy this again, if only I could find it on the shelves more often. Ommegang has outdone themselves. . . an absolute delight if you enjoy Tripels.

Its Ommegang + its a Tripel = Its damn good! Pours a clear gold with a decent foamy head. All the aromas and flavors you would expect, done to near perfection, hence the name. Yeast, malt, bread, orange, coriander and sugar. Its all there. Just the right amount of sweetness. Alcohol is there but not dominant, nicely carbonated.

Mouthfeel: A slow drinker, in part due to the high ABV.

I could have sworn I'd reviewed this before. Maybe I just didn't type up my notes yet.

BOTTLE: 1 pint 9.4 fl oz. Brown glass. Branded hood-and-wire cap over a cork. Appealing gold label design with art depicting two arrows in the center of a target (perfection, get it? But hey, shouldn't there be three arrows?)

HEAD: ~6-7cm in height. Off-white head. Soft appearance. Slightly creamy, with a silky smooth consistency. Apt for a tripel, with ~10 minute lacing that doesn't betray its high ABV in the slightest.

The head exceeds the body in execution, and the overall result is a decent looking tripel. The lack of vibrance in the body really holds it back; one would expect a glorious vibrant gold given this is a Belgian style tripel brewed by a Duvel-owned brewery.

Suggests a wonderfully soft subtly executed ale lacking the booziness that plagues so many inferior attempts at the style. Boasts a great Belgian yeast aroma, getting me excited for a true-to-form tripel from one of our best Belgian style breweries.

TASTE & TEXTURE: Orange creamsicle flavours are complemented beautifully by a soft silky mouthfeel, making this 8.90% ABV surprisingly refreshing in spite of its medium body. Perfectly carbonated; I suspect bottle conditioning is to thank.

Not oily, gushed, hot, boozy, astringent, harsh, rough, or wet. Has a classic smooth wet texture and I suspect oats helped give this its lighter body and increased smoothness.

The taste has many subtleties, but citrus from dried bitter orange peel and candied orange peel is prominent. Soft wheat gives this its approachable malt backbone, complemented by (I think) oats. Unmistakable Belgian yeast character is indicated by the subtle yet intricate saccharomyces cerevisiae spiciness and muted esters. Yeasty spice and coriander seed intermingle, lending this a bit of a prickly feel. I wouldn't call it fruity per se, but the orange peel would be detected by any discerning drinker in a blind tasting even though it's seamlessly integrated in the rest of the build as a whole.

And a whole this brew is, boasting impressive cohesion and unity of flavour, exceeding the sum of its parts. Depth of flavour is quite good, and flavour duration and intensity are aptly moderate as demanded by the style's conventions.

There's a nice harmony of texture and taste at work here, and the beer's key strengths for me are its softness and its wheat/orange peel one-two punch. That it isn't boozy is a miracle already, elevating this well above the pack of mediocre tripel style ales.

OVERALL: Sometimes I forget how terrific Ommegang is at emulating Belgian styles, and then I try almost any in their lineup and I'm instantly reminded. Normally I'm wary going into tripel style ales given their propensity for booziness (I guess it's something about that highly attenuated Trappist yeast), but Ommegang reigned this one in, delivering a devilishly drinkable tripel that bests even many Belgian brewed expressions of the style. In terms of American-brewed tripel style ales, this is up there with the likes of Logsdon, Russian River, and Victory for me - and that's tough company to rival. Easily a Top 15 tripel for me currently (regardless of country of origin), and absolutely worth trying once - even if Ommegang has other Belgian ales I'd sooner reach for. No, it isn't the titular "perfection," but it's quite tasty.

Poured from a cork'n'cage bomber into a tulip

T/F: Complex and delicious... Belgian yeasts and sugars throw a lot at the palate. Summer fruits and honey... caramel... candy sugar and banana. A little spice thrown in for good measure. Carbonation was on point and the finish was sticky and semi-sweet.

O: Slightly sweeter than a usual tripel, but this really worked for this beer. Just delicious, and Ommegang knows their way around the Belgian styles. Recommended.

I'm really loving these new Ommegang bottle shapes. This is a beautiful ale on the pour. Fantastic feel and texture. Sweeter than say your authentic tripels. Still carries a nice balance and the yeast strain is off the charts delicious. But this for me leans more toward those thick bodied Belgian strong pale ales. It's very well balanced considering it's sweetness and makes for the absolute perfect after dinner ale. It's big bodied with rich fruity esters, beautiful aromatic yeast strain and sweet candied malt. Most breweris would have this turned on its head, but Ommegang does brilliantly in making a perfectly balanced Belgian ale that keeps its fruit filled flavor and spice with a bunch of sweetness. It carries some hints of booze along the palate as it warms, but it's as close to Belgian perfection as any US made ale I've had. They hit it dead on with the perfection part though it's more of a strong pale ale than tripe for me. But hell, do we really care what style liquid it is as long as it's as grand as this?

Smell: Yeasty, floral, herbal, with a barest hint of phenol.

Mouthfeel: Highly carbonated but not fizzy. Scrubs the palate clean and has a nicely airy mouthfeel with a good smooth thickness underneath.

Overall / Drinkability: A perfectly balanced tripel and well-named. Dangerously drinkable - I was noting the potency about halfway through my glass. I would not have minded another glass in which case I would have been in serious trouble this stuff is so smooth. A very delightful tripel and I'll have to see if I can pick it up again.

Pours a hazy amber color with a thick one and a half inch white head that is very well retained , but leaves little lacing.
Smell is pretty mild, with some lemon, yeast and spice notes. Taste is slightly sweet with yeasty bread, apples, pears, cloves, slight pepper and malt flavors. Finishes dry. Medium to heavy bodied with high carbonation. Flavors get much better as the beer warms a little. A very good example of a Belgian Tripel.