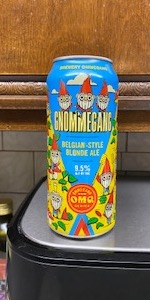 I had been meaning to try this variety of the beloved Ommegang brewery for a while. It looks innocent and smells even more so, but packs a 9.5% ABV. My brother and I are great fans of Ommegang and you should be, too!

Look-It pours a mildly cloudy off golden yellow color with a strawberry/copper appearance that is absolutely amazing. The head comes in strong, but settles into a thin large bubble head.

Smell-I get a banana, citrus, and salty hot dog, and lemon with spicy, creamy, black pepper, and apricot aroma. It is also complimented by pineapple rind and cotton candy. It has an amazing bland flavor that cuts the sweetness due in part to the Chouffe yeast.

Taste-The taste boasts thick bready malts, toffee, orange, and other fruits such as clementine and mango, but very subtle. I’d say that this variety has a slightly dry finish and is very lightly hopped; the perfect brew for anyone. This brew is almost like a farmhouse ale, because of its spicy fruitiness that is so common for that variety.

Mouthfeel-It is sticky and sweet, but moist and syrupy. I think that this variety is spicy, hoppy, and fruity. The
peppercorn and fruit cake make you want to chug this brew, but be careful, because it does not taste like a 9.5% ABV, but rather like a 7% beer.

Overall-This beer is moist, oily, thick, and sweet, but not overwhelming. It also has a variety of flavors and smells as well as a fun appearance and mouthfeel. Ommegang has done it again, but you need to try it for yourself! Cheers!

Flavor packed, A true Belgian, and a happy beer. Makes one happy.

A: The beer is hazy pale yellow in color and has a light to moderate amount of visible carbonation. It poured with a finger high white head that died down, consistently leaving a thin head covering the surface and some lacing down the sides of the glass.
S: Moderate aromas of pale malts and fruity yeast are present in the nose.
T: Like the smell, the taste has flavors of pale malts and fruity yeast along with notes of spices towards the finish. It's not sweet, but there are some candi sugar-like flavors.
M: It feels medium-bodied and slightly dry on the palate and has a moderate amount of carbonation.
O: This beer lacks the complexity of some of the good beers in the style but is still pretty good and quite drinkable considering its strength.

Spectacular array of belgian flavor. Poured half of the 12oz bottle into a tulip and an astounding amount of head came out. So good...so good. Pronounced blonde ale speciness like a leffe, floral sweet ester aroma. hazy golden color.high 9.5 abv. Sweet finish typical of the Belgians low IBUS.

Ommegang Gnomegang Blonde Ale poured a hazy golden hue that produced a nice 1-1/2 finger high head . The bubbly/foamy head reduced to spotty lacing. The nose is sweet, of candied sugar and light fruit [pears, peaches and apples]. The taste is much like the nose with the addition of peppery yeast and light hops noted. Mouth feel is high-medium with active carbonation and a dryer finish.

Overall, a nice flavorful Belgian Style Ale that is brewed in the USA.

4.0 S: Interesting mix of earthy, spicy, and fruity. Apple orchard and hay earthiness. Pepper and, to a lesser extent, clove. Peachy fruitiness with banana and a touch of bubble gum in addition to the moderate yeastiness.

4.0 T: The taste puts pepper and peach into the limelight. Banana, hay, and apple orchard earthy funkiness next. Clove is much stronger in the taste, but still isn't a major player. Bubble gum gains strength on the finish and the yeastiness is discernable throughout. Hops give a balancing bitterness as well as a touch of earth. Booze is very well hidden.

4.0 M: Medium body. Good moderate carbonation that isn't quite as spritzy as I'd like. This is made up for, however, by the ample creaminess. Lightly chewy from the yeast.

4.0 D: Overall, a solid beer on all fronts. Exceptionally drinkable for what it is and the booze never even shows up, let alone get in the way. Good flavor profile. Definitely worth the purchase. Any of the above 4 categories could have been a notch higher.

Review from notes. Thanks to my buddy pat for opening this one up.

A: Pours a deep orange/copper color with a large white head on top, made up of many tiny bubbles. Lots of small carbonation bubbles are released from the bottom of the glass. Nice head retention, eventually resulting in a patch on top. Not as much lacing as expected from the head that formed.

S: Rather fruity aroma with banana, pears, apples, and a bit of raisins. Rather yeasty, typical Belgian characteristics, with a bit of spice and some doughy malt. Slight bubblegum aroma and a hint of alcohol as well.

T: The aroma shines through nicely with lots of big fruit flavors. The banana and bubblegum flavors are dominant with undertones of apples and pears. There is a honey-like sweetness along with a decent amount of biscuity and doughy malt. There is a little bit of pepper spice.

M: Medium to full bodied with some prickly carbonation. Seemed to be just about right in this department.

O: A very nice collaboration beer between two great breweries. Drinks very smooth with a little bit of an alcohol kick. Not much wrong with this beer at all.

Presentation: It was poured from a brown 750ml corked and caged bottle into a tulip glass. The label has a nice description of the beer and it lists the abv at 9.5%.

Appearance: The body has a tan/blonde color with a heavy haze and some light brown sediment floating around near the bottom of the glass. On top there is an off white cap of foam that slowly settles and makes some nice slick lacing on the glass.

Smell: There is a big classic Belgian yeast character coming to the nose. With it comes fruit, funk and wet hay mixed with some sweet bready malt and solid notes of floral/spicy hops.

Taste/Palate: It started with a nice base of sweet bready malt and yeast with a light touch of funk and wet hay. Inside this are some nice fruity notes as well and I get white wine grapes, light unripe peach and mild orange blossom. This is all backed up by a firm floral and spicy hop bitterness that adds a pleasant balance and dryness to the finish. It’s well balanced on the palate and fun to drink.

Notes: Overall it is an outstanding Belgian which to me seems to fits somewhere between a Blond and a Triple. Also of note here is the very well hidden 9.5% abv.

Very sweet aroma. Smells like gingerbread with some banana, clove and bubblegum with a little funkiness.

Eww way too sweet. Starts off with some cloying sweet bread character. Banana is somewhat presence, but the clove then overpowers and it finishes sweet and clovey. Accentuates all the worst aspects of the style.

I found this completely horrible. The clove was way overdone and the sweetness provided a weird character. Had I been drinking it by myself, it probably would've ended up down the drain, but I gutted through my ~7 oz.

Big bold blonde, perhaps not hugely complex it has its way with the palate regardless. Dare is say "dangerously drinkable" ... it is. Good times rolling with this bottle.

Ontap into a snifter. Bright gold in color, fizzy, bone white head forms and leaves alittle lace. In the aroma, estery Belgian yeast and some floral hops. In the flavor, nice dry yeast, moderate hop presence with notes of earth, pine and faint citrus. Alcohol is also rather pronounced in the flavor profile, but does not detract from the experience. Mouthfeel is on the lighter side of medium bodied, with a dry finish. Overall, this is a good belgian pale, would have liked more hops to cut the alcohol flavors a bit. This one was similar to the Ommegang BPA only bigger.