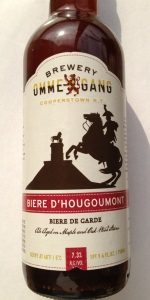 Notes: Our Limited Edition Biere d’ Hougoumont is brewed with traditional French ale yeast, eight malts, French Strisselspalt hops, and aged on white oak and hard maple wooden staves. A traditional Biere De Garde style, this malty French-style farmhouse ale is brewed to be aged. The name honors the Hougoumont farmstead at the pivotal center of the Waterloo battlefield. Napoleon repeatedly failed to take the fortification, he then lost the battle and “met his Waterloo.”
View: Beers | Place Reviews
Reviews: 83 | Ratings: 351 | Log in to view all ratings and sort
Reviews by UCLABrewN84:

On tap at The Surly Goat in West Hollywood, CA.

Pours a hazy orange with a foamy beige head that settles to an oily film on top of the beer. Small dots of lace form around the glass on the drink down. Smell is of malt, grain, caramel, and wood aromas. Taste is of malt, caramel, wood, and some slight spice flavors. There is an alcohol kick with each sip as well. This beer has a good level of carbonation with a crisp mouthfeel. Overall, this is a good beer with some nice aromas and flavors that make it easy to drink.

Poured from a caged and corked bomber into my Ommegang glass

A- pours a clear dark copper color with a slight red hue to it, a big fluffy two finger head appears and sticks around for a long time, a steady stream of bubbles races to the top

T- malty and earthy just like the nose, some hop bitterness mixed in, some woodiness as well, a little tartness as well, dark fruits aren't as noticeable on the sip, alcohol is noticeable toward the end of the swallow, seems a little lacking

O- there was something slightly off with the flavor, felt like it was lacking a little bit, other than that the style and composition of the beer was pretty spot on, might grab another and see if it develops over the years

This poured out as a nice looking red color, there was a decent off white head on top of the beer for quite a while. The smell of the beer has some Belgian yeast aromas as well as plenty of fresh wood on the nose. The taste of the beer is on the malty side with a slight hint of spice in the finish. The mouthfeel was nicely carbonated with a drinkable body to it. Overall this beer was pretty good, I read that it gets better with age and I would be fun to see how it alters over time. However, the price tags hinders me from getting another bottle.

Appearance: deep burnt orange body with a one finger (if that) bone white head that leaves no lacing

Flavors: to me the oak wood stands out over the maple wood; nice spicy fruit style; the fruit reminds me of apricot and the spice a light clove

To the Point: I was really looking forward to this ale; unfortunately it is just good at best to me; the overall aroma is light; the flavors – the fruit did not really do it for me; the spice was okay; the wood was good; this ale just does just really doesn't do it for me @ 15 bucks a bottle (750ml)

A-Dark orange. Not a glower. Head is a solid finger of tan creamy fluff. Leaves lacing and looks good napping atop the body.

S-Plenty going on. Yeasty but very sweet. Oaky, but not aggressive. Smells like they lubed the beer in honey before they oaked it. Very malty. Maple syrup.

T-The nose was a cool lithe artsy collage, but the flavor is far too sweet. The aging on the wooden staves is this beers only high-point. Aside from that its a cloying mixture of maple syrup, yeast and honey. Just too sweet. The flavor does morph on the palate, but I don't like the flavors.

M-Syrupy. Not enough bubbles. Sticky. Makes you chew the air to relieve the stickiness.

O/D-Not my thang. Sorry Ommegang. Sounded pretty cool, but when I am paying $11 for a 12 oz. glass (admittedly not Ommegang's fault for the tap pricing) the beer better be a banger. Shoulda known, shoulda known.

A-Cloudy amber, one finger head with some carbonation.

S-Maple, oak, vanilla, grass wheat, but the maple is overpowering.

T-Very sweet maple and oak dominate with slight vanilla. Tad bit of spice and grass. Some mollasses as well.

M-Light to medium bodied, not much carbonation.

O-At the end of the day too much maple. If it was toned down a little bit, the balance would be great and the beer would improve a lot.

Pour from the botle leaves a lovely translucent copper amber color, with a nice haziness. Bit of head, fading quickly.

Nose is really dank and peaty. Some sweetness like corn, cherries, and maple. Enticing.

Taste is biting. Lots of acid on the front, with ripe cherry flavors, cranberry, and again that sort of wet, mossy flavor. Get a little bit of the yeast too. Maybe a little maple too.

Fascinating beer. Really neat and balance flavors. Quite unique, but definitely worth a trial.

Smell: Fresh raspberries. Very summery for a Belgian and I'm not used to smelling fresh, natural berries in a beer. Shandy-like.

Taste/Mouthfeel: Pine and fruit punch. A very unique flavor. A bit too subdued, but still very pleasant. Mouthfeel has a lot of yeast.

Big thanks goes out to Julie from Trappe Door for sharing this one at the celebration of her last night there! Served from bottle into a Trappe Door tulip. Poured a ruby red-orange with a half finger off-white head that subsided to a minimal amount quickly. Maintained decent lacing throughout the glass. The aroma was comprised of sweet mat, wheat, banana, earth, and spice. The flavor was of sweet malt, earth, wheat, fruit, and spice. It had a light feel on the palate with medium-high carbonation. Overall this was a decent brew. I had just seen this brew on the shelf at GBX about an hour or so before and mentioned that I needed to tick it, but it found its own way to me. Not really much to report here as far as complexity or intensity. It was a decent brew for the style, but definitely didn’t stand out from the rest like I would have hoped. That being said, it is definitely worth trying at least once if you see it on the shelf. But I doubt I would buy a bottle to try myself again.

Gift Of The Magi
The Lost Abbey