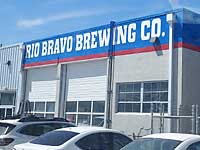 4.08/5  rDev +13.6%
vibe: 4 | quality: 4.25 | service: 4.25 | selection: 3.75
Visited on a weeknight in April 2017 with a few coworkers. The tasting room was modern, large and well-appointed. It was also almost deserted, but the staff was cheerful and attentive. The brewing equipment was visible behind glass and I'm told the head brewer is happy to give informal tours when he is present, but unfortunately he was not there that night. We did not try any food. I had a taster flight of 5 beers from the tap list, which was sufficiently large but not overly extensive. The beers were all fresh and well-made, probably the best overall beer sampling that I had after visitng several other taprooms that night. For me the highlights were the Russian Imperial Stout and the Woodford Reserve Barrel-Aged Porter.
Jun 19, 2017

Reviewed by LXIXME from New Mexico