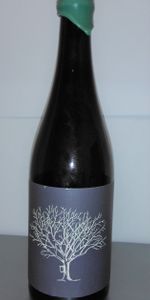 Pours the color of motor oil from a 1964 farm tractor that has never had an oil change with a small head that dissipated rapidly. smell of decadent chocolate, vanilla, dark roast coffee with a touch of alcohol. Taste is chocolate, maple, vanilla coffee with a touch of cinnamon at the end. Reminds me of chocolate maple fudge. Nice thick mouthfeel and a bit of warming alcohol. Overall a very nice Imperial Porter.

8 ball black with a fuzzy dark tan foam that settles to a thick, uniform quarter pipe collar all the way around.

Thickly sweet vanilla and maple syrup tease out some candied nuts, brown sugar and cocoa dusted almond. Semi-sticky with a slight burn, a of hint cinnamon Pop Tarts continues the decadent dance before a more roasty toastiness brings it closer to Earth in the finish.

While it sounds absurdly sweet, it's relatively nicely balanced. That said, it was brewed with maple sap, so it's very unique. I found it quite refreshingly delicious, holding up well against a slew of other pastry whales.

Might be the first crowler that didn’t spit all over the digits used to pop it open. The beer, it is black. Maple, vanilla, & cinnamon come through strongly on the nose. I like.

Pudding Dribbles was the first sip of Forager that I had, & instantly converted me into a fan. Making maple pop in a beer is (evidently) not easy, & this one has it in maple spades. Big maple hit with a base of vanilla, sweet malts, chocolate shell, with an appropriately subtle jab of cinnamon (which can easily ruin a good beer), which either lends or accentuates a gentle spiciness; if you’d told me this was rye barrel aged, I might believe you. Rich, filling, smooth, & so easy to sip. I could drink a lot of this.

Nillerzzzz was the star of the release today, but if this wasn’t better, it was neck in neck. A fantastic beer that makes great use of maple.

Pudding Dribbles from Forager Brewing Company
Beer rating: 94 out of 100 with 32 ratings