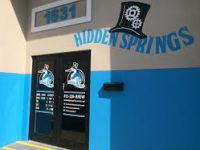 In the semi run down industrial area of Tampa, you will find this brewery tucked inside the corner of a warehouse. The bar area isn't very large but has enough space for a few tables and a few barstool. The service is fast, the lighting is low and sports is playing on the T.V. while 'Trap' music is bumping on the radio. The selection is very limited in the summer to just IPA's and Berliner Weisse beers on tap. They do have plenty of limited, small batch stouts available on bottle release days but they sell out in 1-2 hours typically. Great place to drink super fruity, dessert Berliners.

Relatively small, this concrete taproom is fairly near to the production area as you can readily smell the rather potent waves of spent grain wafting out from there. It consists mostly of communal, high top tables and IG-ready walls that have some trendy icons painted here or there, as well as some framed artwork for sale.

When we were here, the taplist featured a lot of hot, out of town breweries, and maybe 4-6 Hidden Springs drafts. No matter what beer you chose, there was no option to get a flight, a short pour, a half pour, or anything, even though only 6 or so other people were chilling in the taproom at the time. Not only that, but the prices of the beers were not listed anywhere. Whatever.

So you order two beers, and they fill two clear plastic Solo cups all the way to their brims. Fun! Then you want to try two of the guest drafts. And after that you notice two others you want to try. Before you know it, you have six 3/4 full Solo cups in front of you. This is probably over a half gallon of beer you have no intention of finishing. You go to checkout and find that you've been ordering $10 pours of draft beer all the while, most of which was mediocre at best, and realize you'll never be back again.

Smaller room, no windows, NEIPA and sour beer boutique kinda spot in downtown Tampa, about 10 mins from the airport if you are just visiting. Simple and straightforward kinda spot, longer bar straight ahead as you enter, with about 6 or 7 high and larger tables...No food, but feel free to bring some in. They had 9 of their own quality and interesting brews on tap when I visited...friendly folks working the sticks, beer to go in cans in the fridge by the bar, I was pumped to see cans from Equilibrium and Finback...apparently they just did some collabs and/or tap takeovers...then run with the right crowd ...well worth a visit if in the area

A little small and can seem real busy due to location. Service is still quick and prompt and the beers on tap offer nice variety and are good quality. Other than parking being an issue there’s no reason not to try this place.

Great beer. Flavor combinations are often unique. Would like more cans and merch on site with a friendly price point.

Pretty cool laid back small brewery. They allow children and dogs. Service is really quick and nice. They have 15+ of their beers on tap with a couple different bottles for sale. A bit pricey for non BA bottles.

Parking can be an issue but they are working on it. For now, street only.
20 taps on the wall, stainless on the bar top, wood and iron everywhere else.
Music is low enough to converse easily, a nice departure from the norm.
Service is friendly, knowledgeable and quick, all good things.
I'll be back. A lot.