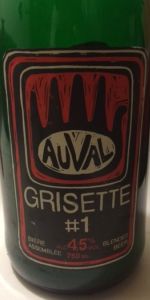 Notes:
View: Beers
Reviews: 2 | Ratings: 4 | Log in to view all ratings and sort
Reviews by groleau:

Bottle: Poured a hazy light yellow color ale with a nice large pure white foamy head with good retention and some lacing. Aroma of light cereal notes with light dry notes is more subdued then I was expecting. Taste is also a mix of light cereal notes with some dry floral hops and a bland finish. Body is about average for style with good carbonation. I understand that this is a table beer but still somewhat to bland for my taste.

Enjoyed this one in 750 mL bottle format. Appearance is a hazy yellow, colour of lemon drops. Surprisingly, not very carbonated, even though it was packaged in a corked champagne-style bottle. A thick, brilliantly white head appeared immediately after pouring, settling down to a very thin cap of fuzzy white froth. A little nice lacing around the glass. Label suggests the grist is a mix of oats, barley, and wheat. Given the appearance, I'd believe it.

First taste is pleasantly tart and dry, light on the hops but very citrusy. Not much hop aroma, but definitely tastes as if it might be blended with some sour ale. Mouthfeel is reasonable despite the low gravity, not thin at all.

Very refreshing, good accompaniment to a meal. Would've liked a bit more carbonation, and maybe a little more hop character, but overall not a bad table beer at all. I would be interested to try this again sometime.

Update: Added dregs of this one to a few bottles of my homebrewed saison. Definite sour character after a few months of aging suggests this is not a kettle-soured brew, but one with viable cultures in the bottle. Neat.