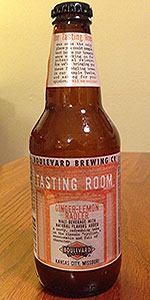 Notes: Ginger Lemon Radler is a zesty, refreshing take on the tradition of mixing beer with soda or lemonade to create a light, thirst-quenching beverage ideal for warm weather. Radler (literally “cyclist,”) takes its name from active German sportsmen of a hundred years ago, but our version tastes just as good even if you do nothing more strenuous than lifting it to your lips.
View: Beers | Place Reviews
Reviews: 72 | Ratings: 518 | Log in to view all ratings and sort
Reviews by woodychandler:

I have been meaning to try this one for a while & when I found it in CANs, I just knew that I needed to add it to The CANQuest (tm)!

From the CAN: "Kansas City * Since 1989"; "Sunshine season class for a uniquely refreshing brew with added zing. Ginger Lemon Radler is our take on the classic German 'cyclist' - bright and easy-drinking, with tangy citrus and a touch of ginger spice."

I did a little in-CAN agitation before performing the Crack!, but it did not seem to have had much effect. An inverted Glug also failed to generate much more than a light haze. However, I did get just under two fingers of fizzy, foamy, bone-white head with modest retention. Color was a lightly-hazy Yellow-Gold (SRM = 4 - 5). Nose was pretty redolent with ginger, but the lemon was also coming through nicely. I was reminded of tea or cough drops, but neither in a negative way. It just smelled appropriate for its name. Mouthfeel was kind of thin, watery and unobtrusive. The taste was heavily weighted towards the ginger, which was appropriate, since it got top billing. The lemon flavor added a tart dimension that was perhaps unnecessary, but still enjoyable. Finish was dry, as any beer with spice should be, but I am not sure that it was entirely refreshing. I would want this less after a bicycle ride & more with sushi or Chinese food, like at Tony Wang's.