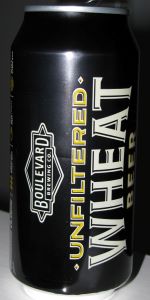 Notes: Boulevard Unfiltered Wheat Beer is a lively, refreshing ale with a natural citrusy flavor and distinctive cloudy appearance. This easy drinking American-style wheat beer has become our most popular offering, and the best-selling craft beer in the Midwest.

It's not going to blow anyone away, but it'd do out of a cooler on a hot summer day.

Rated by eithne from Minnesota

Reviewed by Shelbs90 from Montana

On the pour a 2 finger head of fine white bubbles forms then over a minute or two it dissipates to a couple islands of bubbles and a ring around the glass. The color is a very hazy dark straw. Quite yellow to be honest, but not in a bad way. Darker and more saturated in color than a hefeweizen.

Aroma is quite bright woth a light citrusy vibe but also a lot of nice but also light yeasty almost hefeweizen like notes. Not quite banana-y but certainly on the way. Not quite an authentic hefe but very promising and it doesn't have to be authentic anyways since it makes no claims. Light, bright and crisp.

Flavor follows the aroma but brings even more of the citrus, presumably hops, and once again balanced out by a nice malty light wheat beer flavor again similar but not quite the same as a German hefe. A nice twist on a wheat beer. Much better when poured into a glass, from the can The flavor is quite dull and almost just beer like. In the Glass it is very balanced with very light but detectable hops and a nice light but crisp wheat and malt plus slight banana as the initial citrus hop fades.

Feel is quite bright and dry, and not very heavy. Good summer beer for sure and very sessionable. A bit watery on the finish and leaves the mouth actually feeling a bit dry, but nothing to really complain about.

Overall a solid albeit a bit light American wheat beer carrying some nice German influence, but with the American wheat citrus character as well. Easy drinking sessionable and low abv with some nice light flavors for something a bit bigger than traditional lager but still crisp, refreshing, light colored, and malty.

Aromas of wheat bread and cracker are punctuated by zesty citrus notes. Aromas of lemon, orange and a lightly peppery and grassy spice.

The wheat malts impart a moderate sweetness and slightly gummy and creamy flavors. However, the citrus flavors add lots of zest and dominate for me. Notes of lemon, lime, tangerine, grass and peppery spices.

Light to medium bodied. The mouthfeel is semi smooth and the dry finish has some crispness and a citrusy linger. The carbonation is lively.

Very easy to drink. Not the most exciting style, nevertheless, this one seems to hit the right notes.

Reviewed by barneyrubble from Colorado

N-Some light yeast or wheat notes if I struggle to define what little aroma there is.

T-Dry, non-descript beer with nary a hint of wheat fruitiness or malty smoothness. Tastes like all the fermentable sugar is gone. No real yeast taste either, this is quite strange. Maybe a hint of orange sourness is all I get.

O- I am a bit perplexed, to me this beer has no character or real flavor. If you are looking for characteristic wheatiness I am afraid you might be in for a let down. This beer was a real let down for me. I'll stick with the sixth glass as my go to Boulevard offering.

Reviewed by Mdog from Minnesota

Overall: When I lived in Missouri I used to drink tons of this as it was basically the only "microbrew" around. It's a decent step up from the Bud Lights of the world, a little different flavor, and at the time was supporting a local business. Now, it's part of a big company but the beer is still decent.

Rated by Flachs from Illinois

Rated by MyWifeLeftMe from Kansas

Rated by AmatuerSurgeon from Missouri

Rated by Harebear from Missouri

Reviewed by Kwalk from Kansas

Reviewed by pdwatson from Texas

3.62/5  rDev +1.7%
look: 3.5 | smell: 3.25 | taste: 3.75 | feel: 3.75 | overall: 3.75
This is probably my all time favorite American wheat beer. While it's described as unfiltered, it really pours quite clear with a clean, crisp head that evaporates relatively fast. Lemon and banana scents tickle the nose, and the citrusy base infuses the palate. Very refreshing on a hot summer day...probably one of the easiest beers to drink. While I love a cold Paulaner, the Boulevard Unfiltered Wheat is nothing like a German hefeweizen. The wheat and citrus flavors are much more subtle. It's in a category of its own. If you like a beer that quenches your thirst, this is it.
Nov 19, 2020
Rated: 3.25 by RiceOwls27 from Texas

Rated by Jmilton from Michigan

Looks great, little head but so unfiltered it's like a yellow cloud. Smells creamy; there's some lemon hops and a little soap. Drinks down very easily, even after it has warmed up a bit. Mild, but distinctly American with the hop forward flavor. But everything here is balanced, and there are no off-flavors