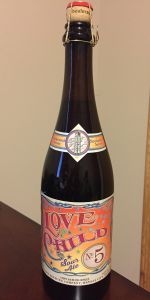 4.23/5  rDev -1.2%
look: 4.25 | smell: 4.25 | taste: 4.25 | feel: 4 | overall: 4.25
Pours a transparent copper with a hint of brown. Head is a finger and a half of off-white, dirty foam that retains well, especially for this aged beer. Aroma is raspberries, cherries, cellar stone and lemongrass with a delightfully well-appointed sweetness up front that turns to a funky tart at the back. Flavor profile is raspberry, cherry, green apple and green pear. It has a light sweetness up front that is quickly consumed by funky tartness. Cellar stone and lemon grass add a little depth. Mouth feel is medium-thick with a crushed icee texture that is accompanied with a moderately crisp effervescence. Overall, it has held up well for its age offering up a little twang of berry sweetness followed by funky sour.

Reviewed by rand from California

Reviewed by AyatollahGold from Indiana

The nose brings a nice acidity along with some dark and lighter fruits. Burnt, tart cherries and other notes of dark berries along with a pear and slight lemon aspect. It all sits on a toasted caramel background.

The taste comes in with beautiful tart cherry, dark berry notes, plums, sour white grapes and pear, with that toasted caramel still holding down the background. The way the toasted caramel mixes with a dry oak presence is really enjoyable.

The carbonation is a little light, not leaving much of a bounce to it, but leaving it to let the acidity shine too. Finishes dry.

Overall, it’s an enjoyable brew. Reminds me a lot of a Flanders; funky and fruity with a sweetness.

4.29/5  rDev +0.2%
look: 4.5 | smell: 4.25 | taste: 4.25 | feel: 4.5 | overall: 4.25
A: Poured into a Duvel tulip to a deep red that's nearly brown. The beer is topped by a finger of dense off white head which fades quickly to a collar around the edge of the glass with minimal lacing.
S: Smells of sour cherries and funk with a little caramel along with a touch of furniture polish
T: Taste is bracingly sour up front with some sour cherries, slight caramel and a touch of oak. On the swallow the sourness and cherry flavor remains strong as well as some slight caramel and toasted malts with some slight oak.
M: This beer has a moderate amount of body with a slightly slick feel on the palate. Carbonation is effervescent but not prickly while the beer has a drying finish from the adicity.
O: Overall this one is really well done. Great flavors and some decent complexity once you get past the huge amount of sourness on this beer. It does slightly dominate but the other flavors are up to the task instead of this beer having become completely one note. It's definitely drinking well if you're still sitting on one.

Reviewed by draheim from Washington

Aroma is bright and tart, woody and sweet. Reminiscent of Flanders oud bruin.

Taste follows nose, only more so. Sour, almost vinegary, with notes of fruit and dry oak. Crisp and refreshing.

Mouthfeel is clean and dry, vanishes off the palate with every swallow.

T - Lovely hit of lactic and brett, sour fruit of cherry and plums, a bit of oak, and a tart sharp finish that suggests plum skin and juicy goodness.

M - Quite puckering, sharp, with a bit of carbonation and a building tingle on the tongue over time.

O - This baby got put in the back of the cellar to age, and it has delivered a solid experience after over 3 years.

Pours a hazy golden-orange color with a small foamy white head that has short retention. Smells fruity and funky with hints of stone fruit and citrus, earthy wood and sweet malt. Tastes of tart stone fruit, even some berry-notes, followed by earthy wood and acidic funk, finishes musty with some lacto lingers. Medium-light body with moderate carbonation leads to a foamy mouthfeel and dry finish. Nice fruity notes throughout with just enough tartness

3.98/5  rDev -7%
look: 3.75 | smell: 3.75 | taste: 4.25 | feel: 3.5 | overall: 4
"Our series of wayward offspring, marked by such cultureal influences as Lactobaccillus and Brettanomyces, can prove so complex that we employ these gauges to convey the intensity of three key personality traits. They present a picture of the ale at the time it was released. It will change as it ages, but don't we all?" Brewed in the style of an American Wild Ale, available in 750ml. bottles and on limited draft. Entry #5 in the series.

(Appearance) Pours a frothy foam head of a pastel tan color over a very mildly hazy pale copper body with light carbonation and high clarity. Retention is above average and there is no visible lacing. 3.75

(Taste) A very strong wave of lactic sourness and vinegar acidity form the base of this beer and conjure the attention of the taste buds immediately, following with a slick pale and caramel bread malt body with a modest sweetness, not overly dry. Finishes strikingly puckering sour and clean, with no discernible depth of character from barrel aging, which differentiates it significantly from its predecessor, although this is not a significant impact to the quality of this ale. 4.25

(Mouthfeel) Texture is slick, lightly residual, softly chewy, clean, medium dry. Carbonation is mild, generating a light frothiness and a mildly crisp finish. Body is medium for the style, shy of medium overall. Balance is moderately acidic, tart, and sour over sweet. Alcohol presence is low and there are no off characters. 3.5

(Overall) Another solid release of this enjoyable sour series, a great beer for those who appreciate a puckering-ly sour wild ale, although I found the absence of details about barrel aging a curiosity; these were mentioned clearly on Love Child #4 and generated an additional depth of flavor and character in the beer, and not to its detriment. This depth of character seems to be absent in this ale, although the base beer sans barrel aging is arguably the finest part of the beer. I'd be surprised if this was a "barrel-less" aged beer, although I'm equally surprised this wasn't mentioned on the label somewhere. Regardless, Love Child continues to be a recommendable series for the sour croud, and a recommended one from me. 4

4.31/5  rDev +0.7%
look: 4 | smell: 4.25 | taste: 4.5 | feel: 4 | overall: 4.25
750 ml corked and caged bottle, Batch L022015-1, best by 02-2017. Served in an Against The Grain chalice, the beer pours a hazy burnt orange color with not quite an inch off-white head that fizzled away kinda quickly. There's a small amount of lacing. Aroma is nice, the brew smells like green apples, tart dark fruit, funk, citrus peel, oak and earthiness. The flavor is nice and tart, with green apple, citrus peel, vinegar, oak, peach, funk, tart berries, earthiness, and a bit of strawberry noticeable. Mouthfeel/body is light/medium, it's a bit slick with moderate carbonation. Easy and enjoyable to drink, too. I thought this was a good sour ale. There was just a hint of sweetness, but it's mostly tart/sour so if that's what you're into then you'll probably like it as much as I did.
Nov 25, 2016
Rated: 4.02 by warnerry from Michigan

A: Pours clear dark honey color with a finger of soft, fuzzy, off-white head that faded into a fuzzy collar. Soapy spots of lace were left down the glass.
S: Peppery, spicy, musty, and fruity nose with an apple cider, fruit skin, vinous quality to it. Dark fruit skins and vinous wine stand out. The nose is not sweet, but I get hints of caramel, whiskey, and slight vanilla and raisin.
T: Follows the nose with vinous and peppery notes of wine barrel, musty damp basement, whiskey, and tons of drying red fruit skins. There is a touch of pear and balsamic vinegar. The finish is very drying with a quick blast of tart lactic acid, and the aftertaste has lingering hints of whiskey, leather, and stone fruit.
M: Medium body, very dry and crisp mouthfeel, soft and fluffy carbonation. The acidic is bright and tart, but not harsh or overly vinegary.
O: Bright, dry, and complex, with almost no sweetness but tons of vinous fruit flavors. Delicious.