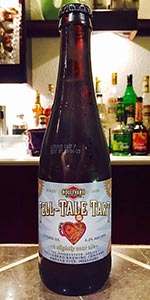 Notes: Deriving its name from Edgar Allan Poe's classic tale of madness and murder, our newest Smokestack Series release takes a predictably lighthearted approach to the subject of sourness. The subtle acidity of Tell-Tale Tart is answered by a soft, biscuity malt character, making this a sour ale that suggests, rather than announcing its tartness. Beginning with a bracing sharpness at first sip, the ale mellows on the palate to a smooth and faintly lingering finish.
View: Beers | Place Reviews
Reviews: 133 | Ratings: 581 | Log in to view all ratings and sort
Reviews by Hopyard57:

In the style of Edgar Allan Poe:

Off I pried the cap and received the beer's hiss as myriad snakes surrounding me, prepared to strike with their poisonous fangs. I poured the beer into my empty chalice and gazed in dread at its amber complexion, light and red as blood wiped from the floor with a soggy rag. Oh, I could envision the moisture from that rag wrung into a tin pail. Such was the amber hue of the beer in my glass. I dared to inhale, through my nose, this ominous liquid. A bouquet of tart fruits and the lightness of summer wine greeted my nostrils, granting me some slight reprieve from my prior fears. I sipped the brew with trembling lips, my tongue dry as desert sands. The tartness tumbled from the tip of my tongue and rolled to the back, leaving the imprint of its tangy presence upon each of my taste buds. In the end, I was left with only the tart...the incessant tumbling of the beer's delectable tart.

Very average. The price though impacted my opinion however. It was way to expensive for such a subtle wild ale. Not a lot of depth. Kinda beginner level sour.

Probably a really excellent semi-wild ale for the uninitiated, but perhaps for the veteran of the style it's not all the way there. Surprisingly dark in color, copper with a redness to it, and a lot less head than I generally look for in the style. Smell is faint hot lacto, like they blended a Berliner or something in with a basic amber, although there isn't nearly the grain sweetness or structure of a base beer like that. The slight tartness grows on me, refreshing and light, not acidic and odd in the belly. It sort of sets out the same mission as snapshot from new Belgium does, but it is quite a bit more puckery than that one. I don't love the vinegar aspect here, and it's not as dry as I like, but if can see the appeal, especially for a newcomer to these kinds of ales. Neat they finally put one of these in a smaller bottle, I think it will continue to fuel the recent sour craze by bringing new people aboard.

Not marrying sour, but certainly flirting a lot with it- Boulevard's Tell-Tale Tart shows those giddy aspirations but pulls back in an effort to entice those who are uninitiated while adding an allure to the connoisseur of acidity.

Underneath its creamy and broken froth lies a golden ale with a rosy tint and suggestions of camel. Its nose is moderate with a toasty, nutty tone and an acidic twinge that bends the senses in the direction of zinfindale, apple and citrus. Its taste is supple with sweetness, resting on those crusted cashew flavors and a thin backbone of honey and caramel.

The focus shifts decidedly on the fruit and acidity that the ale reveals while the sweetness retreats and the savory compounds dissolve. The piquant tang of green apple, lemon, lime and white grape tease the middle palate while the earthen taste of dry burlap, cherry and cranberry round out the semi-sharp taste.

Medium bodied for sour, the beer's subtle lasting sweetness is lightly of cola and semi-dry cider while trending acidic, bubbly and dry. The acidity of white zinfindale resonates with a ling of bread crust, soft cashew and green apple.

Appears a clear red/brown with a light tan head. Light pucker to a crisp malt finish with a nose that suggests significantly more acidity than is present. Finishes with metallic overtones (not unpleasant). Little to no hop presence, acid to malt with no distinct bitterness. Big fan of the balance of acidity here, something missing from a lot of warheads in the American sour market right now.

The beer pours out into a Duvel glass a nice clear rich copper color with a 3/8" off white head that soon recedes to a ring around the glass and a thin irregularly shaped island of foam over part of the liquid. Sipping creates a scattered mix of small patches of lacing, some of which slide back down to the liquid and some of which just turn to liquid.

The aromas include a soft balance of tart and biscuity malt that seem to disappear fairly soon.

The flavors are much as expected from the nose with an understated tartness that is answered by the smooth malt flavor and very light sweetness. In the mid and back palate there's some earthy bitterness barely showing.

The mouthfeel is on the light side of medium bodied with a light tingle from the gentle carbonation. The finish begins as the faint tartness disappears amidst the smooth malt flavor and light touch of sweetness that, like an old soldier, just fades away

On the whole this is a nice, easily drinkable tart but not one I'll be revisiting very often given that I've already learned long ago to enjoy beers with much stronger flavors. This one leaves me wanting something more, but not another of these beers.

Given the complexity of the Love Child series, this is a bit of a letdown. Not a bad beer, but not what I was hoping it would be. It seems an attempt by a large brewery to find a middle ground between wild ales and something more "accessible."

It looks and smells ok, but I'm really digging the taste. It has a sweetness as it hits your mouth and then a quick tartness on the back end, with no lingering aftertaste. It tastes like drinking an unflavored sweet-tart.

T - sour grapes, apples, and berries on a biscuit; acidic and dry finish

A: crystal clear; bronze in color with an orange tinge; less than 1 finger ivory head that receded quickly to a thin collar; no lacing;

S: vinegar, apple, and cherry with a bit of tartness;

T: vinegary for a moment, then mostly apple and cherry through the finish; mild bitterness and a touch of tartness at the end;