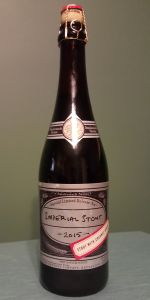 Notes: Using the base beer for Imperial Stout as a starting point, our brewers suspended just over two pounds per barrel of raw and toasted coconut flakes in porous bags in one of our stainless steel fermentation vessels. Finished, cooled beer was then transferred onto the flakes and allowed to rest for 48 hours to infuse the aroma and flavor of the coconut into the base beer. The resulting beer is a marriage of huge, round, chocolate and caramel notes from Imperial Stout, with smooth layers of sweet, toasted coconut notes. No portion of Imperial Stout X – Coconut is barrel aged.
View: More Beers | Place Reviews
Recent ratings and reviews. | Log in to view more ratings + sorting options.

A: Poured into a snifter to a deep black beer topped by a dense and rocky two finger light tan head which recedes slowly to a collar around the edge of the glass with minimal lacing
S: Smells of intense chocolate, roasted malts, coffee, and coconut
T: Taste is a nice chocolate followed by some coconut, a little charred wood and burnt sugar with just a hint of wet cardboard from oxidation. Really nice coconut flavor with a lot of sweet chocolatey stout notes remaining though. hints of coffee as well on the palate. On the swallow there's more coconut, chocolate, roasted malts, burnt sugar, creme brulee, and some coffee
M: This beer has a fairly thick and chewy body that's also a little on the silky side. Carbonation is a bit higher than normal but is still acceptable while the beer has a drying finish due to the abv.
O: Overall this one gets better with every sip. The coconut is really the star of the show on this one but the base beer does provide a nice amount of complexity which makes this one a pleasure to drink. I'd like to see this one come around again.

Coconut & milk chocolate flavors up front; a cinnamon bite to the lips on the finish.

Thin but flavorful; I'd have another.

Pitch black and completely opaque without a trace of lighter color. Three finger frothy beige head that very slowly settles into thick, lasting cap/ring that takes a while to settle. Sporadic streaks of soapy lacing left clinging to glass.

Medium body with a bit more carb than expected. Very faint infection coming in with oxidization and subtle cardboard. Hurts enjoyment and drinkability but doesn't mask other flavors too much. Similar to nose with a bit more roast. Charred toast, burnt coffee grinds, oatmeal and light smoke countered by chocolate sweetness, caramel and coconut. Subtle mounds bar/Samoa cookie flavor coming in that gets stronger as it warns. Sweet chocolate cake and molten fudge but needs a bit more sweetness to balance out heavy roast. Slightly burnt/acrid and a bit harsh but surprisingly easy to drink at 11%. Decent but mouthfeel is a bit off overall flavor profile s unbalanced.

Look: Opaque black body beneath a short head of creamy dark tan foam. Average head retention and lacing for a beer of its strength.

Smell: Soft, chocolatey dark malt and coconut with a whiff of alcohol.

Taste: Fuller than the aroma suggests but not bold, at least not overblown, let's just say solidly flavored. Notes of chocolate, cocoa powder, molasses, brown sugar, coconut, and just a hint of dark skinned fruits. It's very nicely rounded with all of the notes supporting each other and working together. The alcohol found in the nose remains but doesn't really stand out, at least not more than expected for a beer of 11% abv. If it wasn't there I think it might appear to be missing something. It's not that bitter, and it finishes soft and smooth with some lingering milk chocolate and coconut.

Feel: Medium bodied with some dextrinous character, and quite supple and smooth with a very fine-bubbled, seemingly natural (but probably not), moderate carbonation.

Overall: Impressive in the way that it offers so much while seeming at first glance to be less than it is. More importantly, the coconut addition melds perfectly, offering enough that it clearly shows while not standing out too far from the rest of the beer. Very nicely balanced, rounded, and polished. Accessible and easy to drink yet strong. A great beer to sit down and relax with, or perfect for a group as an after dinner drink before, during, or after dessert.

~ I should also note, this beer is not barrel aged. If it was I think it might be too much, and the coconut would certainly be forced aside a bit. It's pretty perfect as it is, and I'm certainly going to search out another bottle or two before it's gone.

The beer is stereotypical “dirty motor oil black” with a huge dark khaki sea foam head that dissipates to a thick frothy layer of film. Lacing is pretty much non-existent. The aroma opens up immediately with a sweet bourbon barrel wood note that soon smoothly glides into decadent aromas of rich chocolate and toasted coconut. It really smells delicious. The taste is whiskey-barrel dominant but rich, dark chocolate, dark malt roast, and ultimately a toasted coconut flavor emerges. The mouthfeel is surprisingly medium bodied and smooth.

Overall, as the beer warms the 11% ABV gets a bit warm on the throat. The bourbon/whiskey notes are a bit thick but otherwise excellent use of coconut.

A nice spin on the normal Imperial Stout. Lovely coconut aromas an flavors, with a toasty, nutty note underlying the coconut and typical imperial stout flavors. A bit greasy in the mouth, but still a hit.

M: The mouthful was thick and creamy, lightly sticky, warming with a low mention of carbonation.

O: A roasty, and sweet mannered drink with loads of bourbon compliments. Tasty, nice flavor, a tad sweet at times, with nice accents of coconut for those that prefer. The 11%abv I thought was nicely managed. A big sweet desert style drink. ages nicely.

Black in color with no light penetration. There's a fingernail of brown head on top. The aroma is overwhelmingly that of sweet coconut and vanilla. I'm tasting a very sweet coconut forward beer. Honestly it's like a pina colada with some dark malt in the back of the palate. The mouth is lightly sticky and chewy.

I do dig high ABV beers, but this one, even at 11% is a bit on the boozy side for me. When the beers get this strong, they almost get a bit too sweet. For a stout, I found this one to be a bit too sweet and strong. The coconut flavor is there, but it's almost over powered by the sweetness and alcohol flavor.

Aroma - Just a ton of sweet chocolate and coconut, roasted malts and vanilla. The coconut is not artificial at all very natural.

Taste - Flavors are amazing, toasted coconut dark chocolate and vanilla. You can taste the alcohol but it works well with the flavors that are there.

Rich and creamy, authentic coconut flavor. Hint of vanilla. It's surprising this is not barrel aged. I'm not detecting any spirit tones but its so smooth. Creamy, textured finish.