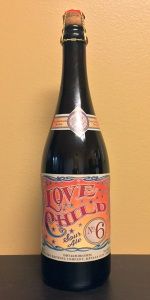 A: Poured into a snifter to a deep gold that's almost red in color. The beer is topped by a finger of dense off white head which fades slowly to a collar around the edge of the glass with minimal lacing.
S: Smells of some nice funk, sour cherries, leather, a little furniture polish, and oak.
T: Taste is fairly tart up front with some sour cherry notes, leather, a little lemon and citrus zest, a good bit of musty funk, but mostly sour cherries, leather and some slight dry oak. On the swallow there's more sour cherry and citrus zest, leather, hint of caramel, some lingering funk and a little more oak.
M: The beer has a moderate amount of heft on the palate with a slightly slick feel. Carbonation is on the low end for the style but it is there and the acidity gives this beer a drying finish.
O: Overall this one is pretty nice. It has some good flavors and complexity which make it an enjoyable drink. While the beer is on the slightly sour end of the spectrum it isn't over the top and complements the rest of the flavors well.

Pours a murky burgundy-orange with no head. Aroma is tart, lactic sour punch of cherries, green apple, plum, and oak. Aroma is staccato, not lingering for long. Flavor profile is smooth crescendo of cherries, raspberries, green apples, plum, and oak. It's not overly sour, just a nice tart, sour. Mouth feel is smooth, with just a little fizz to it. It has a medium thickness. Overall, a super tasty, simple sour. The aroma is a bit harsh, but the flavor profile is mellow and balanced.

One my my very favorite sours....well done

At a recent bottle share, Love Child 4 through 8 were sampled. This reviews will compare all 5.

The flavor follows the nose with an emphasis on apricots. Other elements include lemon, sour plum, and light cherry vinegar. Sweetness sneaks up late, just before a long, tart finish. Warmth amplifies the oak in a very good way.

With a cotton jersey texture and light to medium body this beer is smooth. Carbonation is light and it finishes dry on the palate. Alcohol is present but significantly below the 9.2% expectations.

Another relaxing beer that I enjoyed under a cool roofed deck on a sunny summer July afternoon while listening to World War II planes overhead and reading Vintage Beer.

750ml best by 10/2017 poured into a stemless Aslin glass. Backstory I thought this was awesome when I first tried it whenever it came out, and then saw it for like $12 at Costco and bought a bunch. This was bottled about a year and a half ago, and been in a basement for at least a year.

Slightly darker than a gueze, and based on legs you can guess there's about double the alcohol.

Super fruity on the nose, white grapes and pear. It's not as purely funky as a gueze, but it's almost like a gueze on steroids. Really glad I have a bunch more of these.

Extremely sour, slick mouthfeel from the alcohol. I think the LC's with Flemish/Flander's style ale, and high % bourbon barrels, have way too much "sweet and sour sauce" flavors. This clearly blonde ale/heavy on wheat, and no bourbon.

I can't have hoped for more in this bottle, and I'm delighted I have several more. While this isn't as delicately funky or refreshingly dry as gueze and beers meant to mimic them like Beat/Le Roar Grrrz/Allagash Coolship, this an amped up bigger American version with tons of grape and stone fruit notes, huge mouthfeel from the alcohol, and a puckering taste that finishes clean dry. I typically do not care for high abv sours, but this and Sour Monkey are amazing, this being slightly more complex with the partial barrel aging.

(Appearance) Pours a crisp, fuzzy head of a pastel white color over a moderately hazy pale copper body with light carbonation and fine sediment. Retention is below average and lacing is light and patchy. 3.5

(Smell) More lactobacillus earthiness than in older versions of this beer. Strong nose of tart stone fruit, sourdough and mild funk generates a tame but appreciated level of sourness overall. Potency is moderate. 3.75

(Taste) Much the same as in the aroma, with significantly less body and malt richness than in previous versions for a noticeable drop-off in depth of flavor. Light fruity tanginess and a drying tangy acidity, although the more unique components of vinegar and the richness of the body leave this beer considerably lacking over the last two that I have sampled, despite its high drinkability, nonetheless, it is arguably shallow. 3.5

(Mouthfeel) Texture is slick, moderately oily, lightly residual, very dry. Carbonation is mild, generating a mild frothiness and a softly crisp finish. Body is shy of medium for the style, light/medium overall. Balance is slightly tangy acidic sour over sweet. Alcohol presence is low and there are no off characters. 3.75

(Overall) Something is severely lacking in this iteration of an otherwise very enjoyable series. Both lacking in body and sourness development, there just isn't as much diversity, range and depth of flavor. The overall result is drinkable but far from legendary, and a far cry from where this series started. I hope that Boulevard's Love Child #7 is a return to grace. 3.75

Bigly sour aroma with strong oak and a touch of apple cider. The taste follows the nose. Intense sourness up front, again with strong oak and a hint of cider sweetness, then a somewhat chalky finish. A hint of tart cherry juice on the backend, too, when it warms. Lime-like acidity. Pretty tasty, mouth puckering stuff.

Medium bodied with a bite in the back of the mouth from the strong sour.

This is a one note beer, but it's a delicious note. Bet it would pair well with food, too.

Brief impression from a bottle pour at a tasting:

Delicious and acidic, with plenty of bacterial flavours mulling about. Great clean pale malt backbone lets the bacteria shine. Great balance and build, with good depth of flavour and duration of flavour. Smacky on the palate but refreshing, smooth, wet, and medium-bodied.

Hints of lime and lemon. Lactic acid. No pediococcus or acetobacter bacteria, nor any lambicus yeast(s) (inasmuch as I can discern).

Highly drinkable in spite of its acidity, with a pleasing flavour profile and terrific balance. Boulevard again delivers with this great sour ale that any discerning drinker will enjoy.

Crystal clear, deep orangey-amber appearance. With an agresseive pour, the liquid was topped by frothy, near inch-tall, cream colored cap that quickly fizzled away to nothing. The lack of any head or lacing made the beer appear flat.

Dry, powdery, yeasty notes dominated in the aroma initially. Hint of tartness. Really simplistic and uninteresting. As the beer sat, some underripe berry and sour cherry notes came forth. Touch of oaky tartness. Red wine notes also appeared. There was a hint of a cordial-like sweetness as well. With time, the oakiness continued to intensify.

The flavor profile was slightly more exciting than the nose. The beer was anchored by a stiff, slightly sweet, bready malt backbone. A bit unusual for the style. Tart, berry-like notes appeared next. Perhaps some sour cherry. Bit of red wine as well. Good amount of lemony tartness in the center. More tartness and acidity came through on the back end and in the finish. Red wine vinegar was apparent. The bready malt notes appeared here as well. Some oaky barrel and tannins were also detectible. Like in the aroma, the oak really intensified as the beer warmed.

The mouthfeel was medium-thin for the style and contained a subtle yet spritzy effervescence. Slightly watery and rather nondescript.

I have tried every Love Child version from No. 3 on, and I always seem to be rather disappointed by each release. While this beer was perhaps slightly sweeter and had a stronger bready malt character than the others, the beers all seemed very similar. At $20 a bottle, I definitely will not be purchasing future vintages.