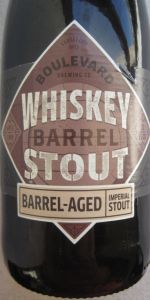 Poured from a 12oz bottle with a best by date of 10/19/18; into a pint glass.
Appearance- very dark, with just enough light to allow some bubble streams to be seen along the sides; thin beige head that leaves
Smell- whiskey, tobacco and a hint of vanilla!
Taste - profound whiskey, maple syrup and with a hint of vanilla bean!
Feel - It’s a whiskey barrel aged stout, so I definitely want the whiskey to be at the forefront, however, I feel that the higher end barrel aged stouts are able to mask the booze a little better.
Overall- I give breweries like Boulevard credit for not being all about making that extra buck and instead pricing their product where it should be slotted; this one is a great value!

2015 version with a best by of 08/07/17. The beer pours a dark brown with a tan, fizzy head that left immediately in audible bubbles.

The smell is whiskey, whiskey, and more whiskey. I think there may be some roasted malt in there and a hint of chocolate.

The taste is tons of whiskey followed by some milk chocolate and then dark roasted malts.

The mouthfeel is slightly thin and effervescent.

Overall this is decent but it's a bit thin and the flavor is not very complex.

Normally this is the type of stout i love. I was excited to try this one. Unfortunately from the beginning I was not impressed. Almost no head not lacing on the beer. Seemed flat as I poured it up. The smell was the best characteristics and thought it had promise. Yet sip after sip hoping it would get better it just really disappointed! Felt flat like it looked. There was a sweetness of vanilla but not smooth. Not very boozy for the ABV of 11.8% but the flavors were a bit muddled. Almost a harsh aftertaste. Not the aftertaste I've grown fond of in other stouts.

I picked up a bottle of Boulevard's Whiskey Barrel Stout last week for $3.99 at The Lager Mill. It's been a little while since I've had a whiskey barrel aged beer and I'm interested to see how this one turns out, so lets see how it goes. 2017 Vintage. Poured from a 12oz bottle into an snifter.

A- The label looks ok, it's pretty plain and simple and it isn't the most eye catching. It poured a dark black color that didn't change when held to the light and it had almost two fingers of creamy slightly darker tan head that died down to a thin ring that stayed till the end and it left some spotty lacing behind. This is a good looking beer, I have no complaints.

S- The aroma starts off with a lower amount of high sweetness with the whiskey barrels seeming to be the first to show up and they impart some strong whiskey aromas with a little bit of oak and some nice and noticeable vanilla like aromas that go into a dark fruit aroma with raisins and a little bit of plums coming through. Up next comes the malts which impart some dark malt, caramel malt, roasted malt, light smokey, sweet malt and caramel like aromas, This beer has a good aroma, all the aspects show up nicely and work well together.

T_ The taste seems to be similar to the aroma and it's a little light this time and it starts off with a higher amount of medium sweetness with the whiskey barrels still being the first to show up they impart all the same aspects that they did in the aroma, but they are a little lighter this time and it goes into the dark fruits which show up just like they did in the aroma with no single fruit seeming to stick out the most. Up next comes a slight bit of warming alcohol and that goes into the malts which show up just as much as they did in the aroma and they impart all the same aspects with the caramel showing up just about as much as the roasted malts. On the finish there's a higher amount of medium bitterness with some more sweetness and it had some whiskey, light dark fruit, caramel and roasted malt flavors in the aftertaste. This is a good tasting beer, it's just as advertised and the balance is good.

M- Fairly smooth, the alcohol is fairly well hidden, slightly cloying, a little creamy, a little crisp, a little velvet like on the lighter side of being full bodied with a medium amount of carbonation. The mouthfeel is good and it works well with this beer.

Overall I thought this was a good beer and it's a good ezample of the style, it had pretty much all the aspects that I was looking for and while the taste was a little lighter than the aroma it still had all those nice flavors come together at just the right amount. This beer had nice drinkability, one is the perfect amount for me. What I like the most about this beer was that it really lived up to it's description and it was true to it's name. What I like the least about this beer was nothing, every aspect was on the same level and I didn't seem to find any weak points. I would buy this beer again, but I don't think it's something I would stock up on and I would recommend it if your looking for a good Whiskey barrel aged Stout. All in all I was happy with this beer and I was a little impressed with how well the balance was. It's one of the better Boulevard beers that I've had and it's a good example of the style. Good job guys, this is one tasty Whiskey Barrel Aged Stout, keep up the hard work.

A-The beer looks a little thin coming out of the bottle. It is deep, dark brown and almost opaque. Head is short and short-lived; the foam fades to a shimmery nothing in about a 30 seconds. No lacing.

S-The aroma is subtle and unsurprisingly sweet for a BA stout of this ABV level. I sniff some dark fruit (prune and fig), black molasses, a good bit of vanilla, and hints of toffee, brown caramel and oak. Barrel flavors are quite subdued, but more noticeable on the bottle I tasted the second night. Alcohol is well hidden.

T-The taste is similar, but not identical to the smell. I pick up more roasted notes like coffee and chocolate syrup. There is still some vanilla, dark molasses sweetness, and a fruity note that is somewhat unusual, but not bad. Toffee flavor lingers on the finish but oak and other barrel notes are only minor players.

M-The body is slightly sticky and on the lighter side of average. Not much in the way of carbonation. It drinks easily for the size.

O-This is a decent BA beer. Alcohol is really well concealed and the flavors are kind-of unique. It does not stand up to more expensive offerings, but if you are the beer guy or gal that daily drinks a big BA stout, this is a good value option.

When the temperature drops below freezing, that signals stout season. And at Kansas City's Boulevard Brewing Company, they take the opportunity to awaken an imperial status stout from a hibernation in whisky barrels for added charm, complexity and strength.

Very dark brown, seeming black in low light, the stout releases a creamy whipped mouse topping. their Whisky Barrel Stout swoons the nose with a host of dark sugars, coffee, nuttiness, earth, dark fruit and spice. But its the sweetness that gravitates toward the tastebuds first with the savory maltiness of caramel, brown sugar and light molasses.

The sweetness is quickly overshadowed by the roasted taste of charred grains. Dark roasted espresso, black walnut and bittersweet chocolate coat the middle palate and saturate with a plethora of malt character. As the sweetness extends toward finish, the nuances of date, fig and red grape bring a fruitiness to the palate with a follow of light licorice. Nuttiness, caramel, vanilla and peppery spice come from the whisky barrels with its own spirited balance.

Full bodied and slightly chewy, the nougat-like textures of the stout is lessened by the whisky spice and acid char of grain. A campfire linger of fruit and coffee extend long on the after palate. There's something about the spice of non-bourbon whiskies that offer an agressive offset to residual sweetness that works perfectly in this stout.

Definitely hot.....but its an 11% whiskey barrel stout, expect something else and you're a mug.everything about it is a top barrel aged stout, thick, boozy and sweet.excellent but very difficult to get hold of.worth the effort.

L: Nearly black pour... with bits of mahogany around the edges. 1.5 fingers of tannish head. Falls fast with a thin rim of lacing.

T/F: Rich burned sugars and charred grains. Coffee and cocoa... vanilla, oak, and bourbon. Boozy... sweetness mixed with the bitter. Smooth with a little zip from the carbonation. Medium in body and filling... complex and becomes deeper as it warms to room temperature. Warming.

O: A very solid bourbon barrel aged Stout. All the flavors I look for in the style. Not the top of the heap but not far back either. A cold-weather sipper.

Appearance: black with ruby highlights when held directly to sunlight. The head is a tan 1/8-finger that fades quickly to only a lacing.

Aroma: molasses, oak, raisins, milk chocolate and light bourbon. Little to no alcohol in the nose despite being 11% abv.

Flavor: astringent. There is a flavor I cannot place: almost like grape juice mixed in. This is a sweet(er) beer. There is little bourbon or oak character: it is present but at very mild levels.

Mouthfeel: this beer carries some weight. Appropriate for style.

Black with a slight head which quickly disappears. Whiskey on the nose with chocolate, prune, coffee, caramel, bit of earth. The prune really shows through in the flavor. Ridiculously and cloyingly sweet, with a little oak. Oily thick.

The smell is of chocolate, vanilla, mild roasted coffee. The whiskey is there. Robust.

The taste is of chocolate, vanilla, coffee (roasty but not overwhelmingly so). Malty with slightly earthy undertones. Wooden whiskey barrel character comes through, esp. in the finish.

Whiskey Barrel Stout from Boulevard Brewing Co.
Beer rating: 92 out of 100 with 438 ratings