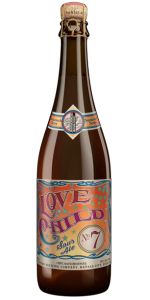 A: Poured into a Duvel tulip to a clear and deep reddish orange which is topped by a dense and slightly rocky finger of off white head which retains very well leaving minimal lacing.
S: Smells of slight sour cherries and leathery funk with a hint of caramel, and a little citrus with some slight oak as well
T: Taste is quite sour up front with some sour cherry flavors with a hint of lemon as well. Caramel, leather, and funk come in along with some oak and furniture polish. On the swallow there's more sour cherries and lemon with more caramel, funk and slight leather.
M: This beer has a moderate amount of body with a somewhat creamy mouthfeel. Carbonation is slightly effervescent and adequate for the style while the beer has a drying finish due to the acidity.
O: Overall this on is great. Really nice sour profile, really nice complexity, and a lot of flavors that play really well together. It's also held up really well since it was released back in 2016. It's definitely drinking well right now if you still have some bottles.

Pours a lightly hazy pinkish gold, which is interesting, with a two inch foamy head with good retention and a fair amount of foamy lacing. Active carbonation. Smells tart, with a light creaminess. Aromas of cherries, some yeast, brett, light malt and vanilla, some bread and apples, light lemon. The taste is tart- more as it warms, some sourness, cherries, some lemon, light brett, light malt. It’s acidic. Mostly smooth, a solid medium body, well carbonated.

This is one I’m not sure I have described well. A good amount of tartness and sourness, great aroma, very good. Really enjoyable.

This beer poured a cloudy orange color with a brief half inch white head, which left a nice ring around the glass.

Fruit and barrel on the nose, with the fruit somewhat subdued in the plum, cherry family. Nice funk from the Brett, and a vinegary sour note.

The taste opens sour, but tempered by the lighter fruit notes and oakiness from the barrel. The fruit leans more cherry and raspberry in the taste. The tartness blends well with the earthiness and fruit flavors. Definitely sour, but restrained enough. Complex and variable flavors.

Dry finish and a surprisingly good accompaniement to the Thai smorgasbord we were enjoyng at rhe time. A lot going on, but quite straightforward, light and refreshng.

Pours a peach-orange with a finger of white foam on top. Fair head retention with a foamy ring that lingers for a long while. A few dots of lacing left behind. Aroma is cherries, and plum. Flavor profile is tart cherries, plum, and green apple. Mouth feel is smooth, with a medium-thick thickness. Overall, sour and tart, but smooth and crisp. Really refreshing sour beer.

At a recent bottle share, Love Child 4 through 8 were sampled. This reviews will compare all 5.

Original rating May 13, 2017- 750 corked and caged bottle- Pours hazy orange with a medium white head that reduces quickly leaving a blanket. Aroma is strong in lacto, cheese, cherries, strawberries, plum, barrel, vinegar. The taste is strawberries, lacto, dusty books from the brett, funky and tart, vinegary, white wine, the barrel characteristics are reduced from last years, which in my opinion was a bit too much. Very solid sour, reminds me of what Almanac is doing with their sour lineup, dogpatch in particular.

A peachy, sort of deep orange colored beer with tons of head and lots of suspended particulate. The head reduced pretty quickly, but this pour had a pretty significant film that stuck around for a good 20 minutes (until i drank it all). pretty funky aroma, smells unpredictable, but the pieces fit together well. Definitely picking up strong fruit, maybe cherry and/or raspberry, but there is a tartness in the aroma that is really powerful. The aroma made me expect extreme tart, but the taste was pretty mellow and even keel. I mean, definitely a sour beer, but it is not extreme at all. (Give it a swish in your mouth and it really explodes in flavor though). I would say that the smell was mostly sour and funk with a bit of fruit, but the taste is much fruitier with the sour recessing quite a bit. Flipped my expectation, really exceptionally well done. feels lite, very good job disguising the 8% ABV. Carbonation is heavy, but feels great with this flavor profile. Another fantastic beer from Boulevard!

(Appearance) Pours a crisp, fizzy head of a pastel white color over a very lightly hazy copper amber body with trace sediment and very gentle carbonation. Retention is below average and there is no visible lacing. 3

(Smell) As far as comparing Love Child No. 7 aromatically to previous versions, this vintage has far more earthiness and funk up front, especially compared to No. 6, and is nearly on par with the 4th and 5th release. Rich earthy funk and thick stone fruit undertones add some subtle complexity and viscosity. The acidity and vinegar elements of previous versions are far more reserved, but the earthiness of Brettanomyces is quite nice in this version. Perceived sourness is moderate, and potency is medium. 4

(Taste) The flavor largely follows the aroma, with a strong up front presence of earthy funk, subtle wet hay, lactic sourness, and some slightly drying vinegar qualities, along with a touch of stone fruit. It hearkens back to my favorite vintages of the four bottle series I have experienced (and far exceeds No. 6, which is arguably my least-favorable release in the series), and would probably hit that point, given more ample time to develop and blend those flavor qualities. The sourness is very sharp at this point and the overall beer very enjoyable and solid. 4.25

(Mouthfeel) Texture is slick, moderately residual, lightly syrupy, softly chewy, tangy and medium dry. Body is medium+ for the style, shy of medium overall. Balance is slightly tangy, acidic and sour over sweet. Alcohol presence is light and there are no off characters. 4

(Overall) This is a return in the right direction for this beer series after Love Child No. 6 took a dreadful turn in flavor development for the worse. This beer is a solid return to the beer as I remember it best, touting a glorious assortment of souring qualities in outstanding balance, with a solid but unobtrusive supporting malt base. The sourness leads the beer as it should, and I could argue that if it continues on this path, this may be one of the best releases of all with some time spent gracefully aging, but is already solid as it is with about a year of time spent in the bottle. 4.25