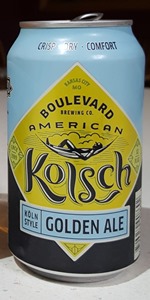 Appearance: Clean golden, with an average head of white suds and a little lace.

Taste: Clean and malty here, as should be. As above, faithful to style and easy to drink. Finishes clean and with only a touch of hops. Nice enough brew, though not one I’d really pursue again.

Pours a ruby-copper with a finger of white foam. Head retention is okay. Aroma is clean, with notes of fuji apple, banana, clove, bready, biscuity malts and a light yeast ester. It's simple, and lightly dry, not lingering long. Flavor profile is fuji apple, clove and clean bready, biscuity malts with herbal, floral hops behind. There is a dry, yeasty taste that comes on at the finish and remains the last lingering notes. Mouth feel is still, with a medium-thin consistency affording little in the way of texture or dynamics here. Overall, a simple beer. It would be at home in the heat, and makes a great replacement for a standard pilsner.

12oz can, sample from the brewery.

Perfect clarity with a long trail of lacing down the glass. A very subtle brew which speaks of the style for sure. Easy drinking throughout, lots of bready tones with just enough hop bitterness and flavor to keep everything together. Expect the style for this brew nothing more and nothing less, so drinkable I grabbed for my glass and didn't realize I had finished it that fast.

I picked up a bottle of Boulevard's Amerikan Kolsch in their new variety pack at The Lager Mill. It's pretty warm today and a Kolsch sounds good, so lets see how it goes. 2016 Vintage. Poured from a brown 12oz bottle into a imperial pint glass.

A- The label looks nice, it's got some good info on it, but it isn't too eye catching. It poured a nice golden yellow color that took on more of a golden hue when held to the light with a fingers worth of bubbly and slightly creamy off white head that died down to a thin ring that eventually faded away and it left a little bit of patchy lacing behind. This is a pretty nice looking beer, I have no complaints.

S- The aroma starts off with a slightly higher amount of medium sweetness with a bready, doughy and biscuit malt like aroma being the first to show up with a slight bit of yeast also coming through. Towards the end comes a little more bready aromas with no noticeable hop aromas. The aroma is pretty nice and true to style.

T- The taste seems to be similar to the aroma with a medium amount of sweetness with those same bready, doughy and biscuit like malt aspects coming through along with some grainy and sweet malt like aromas. Up next comes some doughy yeast that lead into a little more grainy flavor with no bitterness and it had a nice grainy malt aftertaste. This is a pretty nice tasting beer that's true to style.

M- Smooth, crisp, clean, on the full side of being light bodied with a slightly higher amount of medium carbonation. The mouthfeel is pretty nice and it works well with this beer.

Overall I thought this was a nice beer and a nice example of the style, it seemed to be very true to style with nothing showing up that shouldn't be there and it was just as easy drinking as the style should be. This beer had good drinkability, I could drink a few of these, especially when it's warm out. What I like the most about this beer is how true to style it is, it's just what I expect from a Kolsch. What I like the least about this beer is nothing, there isn't anything that I didn't belong there. I would buy this beer on it's own if I was in the mood for a Kolsch and I would recommend it to anyone who is a fan of the style. All in all I was happy with this beer and it was just how I was hoping it would be. This is one of the better Boulevard beers I've had and it's one of the better Kolsch's I;ve had. Nice job guys, this is a tasty and true to style Kolsch, keep it up.

It pours a light golden that clear with a stream of micro bubbles. Two finger white head with some webbed lacing on glass. Aromas of some grain, bread, light citrus or fruit notes. Flavor has a bit of biscuit with some buttered bread flavor and some lemon or pear. Light body that is refreshing. This is a pretty great summer thirst quencher.