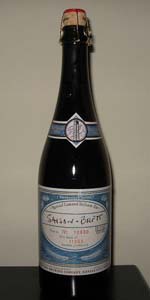 Notes: Saison-Brett, based on our very popular Tank 7, is assertively dry hopped, then bottle conditioned with various yeasts, including Brettanomyces, a wild strain that imparts a distinctive earthy quality. Though this farmhouse ale was given three months of bottle age prior to release, further cellaring will continue to enhance the “Brett” character, if that's what you're after.

An acidic, but fruitful saison. Has a very relaxed aftertaste that is warm and fresh. The energy aroma is better than it’s taste, but still an excellent beer.

Appearance: Pours a hazy yellow-orange, thick, fluffy head, great retention. Inviting indeed, would love it if the head was not just plain white. Lacing is quite good, nothing crazy though.
Smell: Hop backbone, citrusy, namely orange and grapefruit. Notes of brett and pepper.
Taste: Balanced. The citrusy hops mingle well with the brett notes. Hop bitterness is low. Brett, peppery and citrusy hops are at the top. The finish has a nice malty tinge and tastes of alcohol. As it gets warmer, the pepper notes really come through, like Tank 7.
Mouthfeel: Effervescent burn, light bodied, soft, crisp, refreshing, smooth enough, dry. It touches the lips and tongue with a gentle caress.
Overall: First off...it's not Tank 7...and that's to be expected! It's a lovely beast of its own and it's well invited. I have another already to drink down the road, in a few years...but I may get another for my birthday next year. So good!

Taste allayed my fears about this being too big and an "imperial" saison. 8.5% is too big normally, but somehow this kept its style guideline roots. Mouth feel stayed relatively dry and light instead of dropping an oppressive amount of alcohol. More lemon tartness in the taste than aroma. A little bit of other citrus beyond that, a pear note and a pineapple note. Minimal band aid phenol funk notes. Even though it was 4 years old, it didn't seem much different than fresher pours I've had of it.

At the end of the day its a very good beer, but the price point (around $20) is such that I dunno how often I can buy a bottle of it. A pour on tap, sure, knock it out every time. But a bottle, that is sometimes tough because you can get other ones for half the price.

Original rating from notes pulled from Inter-dimensional memorial travel through millions of miles of space and time away: 4.25 across the board

Not the same as I remembered but pretty close. Great big funky citrus lemon peel and orange pith. Brett comes
swinging through with the proto-funk like Herbie Hancock on a headhunt. Piss-soaked horse blanket that I chewed on in a dream. Splendid.

A bit tame on draft compared to the errant eruption of yesteryear. Still fizzy and bubbly, champagney(?). Slight drying with a balanced malt sweetness.

An OG in my book. just a young buck, but man was this a trip when I first had it. Several times since and I stick with my ratings. You know what? Bump that taste and feel up a notch. Worth a shot.

Boulevard Saison Brett 2016, 8.5% ABV. Pours hazy bright orange with a foamy white 5+ finger head that left heavy lacing. Nose is grassy, malty, pepper, leather (belt, not shoe), with slight funk. Taste has lemon zest, a mashup of other fruits, pepper, dry and slightly bitter. There is a lot more going on with taste than I can describe. Outstanding mouthfeel, heavier carbonation, but not unpleasant. Overall world-class.

2017 vintage. Poured into a nonic. Cloudy amber. Massive bubbly head that sticks around to the end. Lots of sticky lacing. Awesome nose. Fruity aroma with some mild barnyard. A very nice start. Fruity up front, changing to clean barnyard with a long peppery finish. Light body. Overall an outstanding Saison.

Thanks to Daemose for sending this one! Reviewed from (long-standing) notes. 2012 vintage bottle, consumed on 9/3/17. Poured from 750mL bottle into an El Catador Barrel-Aged glass.

A: Mildly hazy gold, until some of the yeast trub gets poured into the glass – then it becomes rather turbid. A half-finger of white head fades fairly quickly to a ring of foam, though there's quite a bit of visible carbonation stays around.

S: Musty barnyard and horse-blanket Brettanomyces funk with some lemony citric acid tart and pineapple as well. Biscuity malts, maybe a mild wheat character. Mild black pepper. Not a huge aroma, though appealing enough. It's less Brett-forward than I expected for this long in the bottle.

T: Lemons and citric acid tart, and Brett funk with basement and barnyard, but less fruity than the nose. Biscuit malts with a touch of caramel and oxidation – but this stays mild. Saison yeastiness with a touch of black pepper. Mild pineapple from Brett as it warms through the drink. It finishes with fruity acids mixed with the residual funk.

O: A pretty decent saison. As mentioned, this wasn’t quite as funky as I’d hoped. I’ve had bottles of aged Rayon Vert from Green Flash that the Brett has taken over almost completely. But even as this is, it’s good and the age hasn’t created almost any issues.

2016 bottling, best by 1/1/18, opened 3/2/19. This is a beautiful saison. Beautiful golden yellow, medium head, massive earthy hoppy juicy aromas. Nice high carbonation hits the tongue, mellow, earthy, grassy, hoppy, sour, funky, as the carbonation recedes the hop flavor fills in beautifully. A real treat to drink, and enjoyed 14 months beyond the best by date. At $12 in the bottle shop, a real steal.

Bit of a gusher when I popped the cork, lost about 10% of the beer. Hazy yellow/orange body with massive white head leaving layers of lacing.

Mostly a clean and fruity aroma. There is a hint of the brett funkiness. Apple and fruit smells as it warms, making for a very pleasing blend.

Dry, spicy, bitter taste. Some sweetness. Not detecting any funkiness on the tongue.

Medium to full on the mouth, the finish dries out the mouth.

Overall, a good beer, and I'm glad to have got to try it. Not something I would want a steady diet of though.

Bottle dated 2017 and best by Jan 2019.
Far as I know this was my first taste of beer fermented with Brettanomyces and wasn’t sure what to expect.
The description by thehyperduck (two reviews below this one) is pretty much spot on and I have little to add, other than:
Citrus peel was much less than a hint for me, almost imperceptible. White pepper didn’t come to mind, nor did apple.

If Brett is responsible for the musty, barnyard funk then it did its job and was almost, but not quite, too much.
I would by again if available.