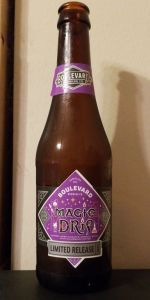 The Wheated Imperial Stout was then aged from 8-18 months in various Bourbon Casks, each barrel bringing its own personality of vanilla, oak and char. Clocking in at 13.5% ABV, the end result was pure Magic Drip.

When you open and pour this beer you’ll find notes of well-rounded coffee aroma and flavor that make way for vanilla, cocoa and barrel characteristics. The fusion of the sweet and boozy Imperial Stout base alongside rich coffee and boozy bourbon casks makes for a balanced beer of rich chocolate and coffee, vanilla, whiskey, and toasted oak.

Poured @45.8°, it's thick, black and oily looking, gives a small tan head that fades quickly, no noticeable lacing. Snot locker get coffee, whiskey, dark fruit, toffee and some ash. Taste buds get that, the booze is noticeable, I'm starting to sweat, it's only 46° here. Thick'n chewy, one damn good beer!

12 ounce bottle, 2021 vintage, please enjoy by date of 16 AUG 2023 stamped on the back label. Big thanks to Brutaltruth for this brew! Served in a snifter, the beer pours dark brown/black with around a half inch tan head that stuck around a while. Small amount of lacing. I like the aroma, the brew smells like coffee, burnt/charred malt, molasses, dark fruit and some bourbon. For the most part I think the taste is similar to the aroma, but with the addition of some oak and vanilla flavors. I think the coffee stands out in both the aroma and taste, wish the barrel character was stronger but that's a minor issue. Mouthfeel/body is medium/full, it's slick and a bit creamy with a moderate amount of carbonation. I liked this brew a lot, definitely worth trying if you're into coffee stouts!

Appearance - The beer poured an inky black color with a dark tan head.

Smell - The nose had notes of fudge and coffee.

Taste - Even before the taste, I was impressed by the huge body. Coffee, dark chocolate, and raisins were soaked in bourbon. It was a strong profile that lingered, particularly the dark fruit notes.

Mouthfeel - The body was thick, even being borderline fluffy.

Overall - Especially for the price point, this is amazing.

Pours black with a finger of mocha colored foam. Aroma is dark coffee, toffee, chocolate, and roasty and toasty malts. Heavy whiskey and barrel is behind, but not adding excessive heat, instead just sealing up the finish. Flavor profile carries heavy coffee with toffee, chocolate, apple, and raisins behind. Hearty roasty and toasty malts add complexity while whiskey and char add some heat. All together, it's a smooth flavor profile, despite the ABV or whiskey presence. Mouth feel is thick, with a near still effervescence. Some very light silt makes its way through to the texture, but otherwise it's still. Overall, a hearty stout that focuses every bit of its attention on whiskey and coffee.

Notes via stream of consciousness: So what is 'Magic Drip"? A barrel-aged wheated imperial stout with coffee... OK. A rough pour has brought up a inch and a half of dark brown foam atop an opaque black body. It doesn't even display any light coming through when held to direct light - that's a dark beer! The first thing I notice in the aroma is green bell pepper. That generally comes from old coffee, but isn't this new? Yeah, it's only 5 months old. Maybe it's me. I could be getting sick and I don't realize it, or it could just be that I'm extra sensitive to that at this point. The head has dropped at this point and I have a pretty big but very thin island floating on the surface. There's no collar, just the island, and no lacing was left behind. That's common in strong barrel-aged beers though. Back to the aroma, I got some roasty coffee of course, a passing whiff of coconut, and chocolate. Wow, the flavor is a lot richer than the nose lets on. It's intense, and that redeems any green pepper in the aroma without question. It's like a fudge brownie that has tiny pieces of raisin in it, and then you get dark chocolate, dried fig, and sweet black coffee. There's some Bourbon, oak, coconut, brown sugar, dark cherry, almond, toasty bread, molasses, and a splash of alcohol as well. It's not that bitter... what is it?... I've already recycled the bottle... 23 IBUs in a very rich and full beer BUT that alcohol and the dark malts and fruit combine to help dry it. It sticks around for sure, but it doesn't come across as super sweet. I actually think it's perfectly balanced for what it is. That alcohol has hit me already, and I'm not sure I've even had half of it. The mouthfeel is intense as well. It's very full bodied, and oily. There's not a lot of carbonation to it which helps to explain the limited head retention and lacing. This is one of the most intense beers I've ever had, but I guess taking an imperial stout and adding coffee and Bourbon-barrels will do that. Well worth the price.
Review #7,745

This is an enticing looking beer when poured into a tulip shaped chalice. Espresso brown, with a swiftly fading dense, dark tan head. Within minutes it looks like an exotic coffee drink with its 1/8 in ring and thin wispy cap. This beer’s rich, dark, roasted coffee aromas are blended with baker’s chocolate, vanilla, oak and a balanced dose of bourbon-like phenols. The taste is like an exotic, smooth, rich coffee liqueur but the mouthfeel is not at all thick or syrupy. There is char, and cocoa notes, in the long drying finish that has a very pleasant black licorice component. The carbonation feels soft and delicate - contributing just enough to help nicely hide the massive abv. This is a truly magical elixir, and an outstanding example of an American-style, Imperial /Coffee Stout.

Poured from 12oz bottle dated enjoy by 16AUG23 to a diagonally cut tumbler at about 45F.
Pours black with brown edges producing a minimal deep tan/brown head that fades quickly. Glass swirls produce single bubble lacing and a brown viscous liquid coating that takes a few seconds to completely rejoin the main body.
Aroma is ruled by alcohol with some barrel notes and finally some coffee.
At 13.5% alcohol dominates the taste also. This is a sipper. Bourbon, charcoal and coffee are all there in quite a complex mixture.
Mouthfeel is really clingy as the glass swirl would suggest.
Overall too much alcohol flavor for my preference but the complexity is really pretty amazing.

Appearance: SUPER black, dense brown head, crazy thick. I actually had to transfer to a different glass since the original glass was not smelling right, when I rinsed out the old glass the water was at amber lager levels of color. Insane.

Taste: Moderate sweetness, lots and lots of molasses. A little bit of mocha in the finish, but no other coffee flavors noted.

Overall: One of the best looking beers I've ever had, insanely thick and coating. However, it missed about every other characteristic that I enjoy in imperial stouts. Maybe it's something with their base beer, I didn't really like Dark Truth from Boulevard either.

I'm not a beer expert but a fan of Boulevard. WOW. This is excellent. I tried this and Sugarwood Baklava tonight. What a beautiful, sensual combination of sweet beer and espresso. At 13.5% ABV and 23 IBU, this is absolute heaven for all the connisuers of both beer and coffee. There's a little bit of tang to it and I would feel strange rating a beer a perfect score--but it's close.

Pours inky black, with dark brown head that fades to a thin ring. Aroma is very bold espresso flavors, a touch of bourbon and oak in there too. Similar taste, just a little boozy. Full bodied, thick and oily mouthfeel.

poured from a 12oz bottle into a snifter. pours an inky black with dark brown edges. a thin dark khaki colored foam coats the top and leaves a thin collar around the edge of the glass. there’s chocolate espresso aromas hiding in the background of a very harsh oak and whiskey presence. detracts quite a bit from what could be. flavors of chocolate-covered espresso bean but again covered up with an extremely harsh barrel heat. it’s always tricky to get the balance between coffee and barrel in these stouts and to me the barrel presence is too much on this. perhaps that will mellow in time, but of course that nice coffee flavor will turn to peppery nonsense in the meantime as well. it’s got a nice mouthfeel to it. full enough. not the thickest stout you’ll ever try but certainly not thin. i just can’t get over the barrel presence. one positive of said barrel presence, is that it does have a very nice warming effect on the finish which makes for a nice sipper as the weather cools off. not terrible by any means, but not may favorite BA coffee stout.

This brew, from a twelve ounce bottle, is an utterly thick, black, and syrup-like. Thin tan head. The aroma is of espresso, booze, and wood. The taste is intense…biting bitterness, enveloping warmth, and fleeting sweetness. It takes a sip or two to accelerate to the intensity, but that patience pays off…the flavors meld very well. I get coffee, roasted malts, and lots of interesting combinations. Full, rich, thick, and hefty. Incredible.

Silk, smooth, delicious. No hint of high ABV in the taste. A bit too sweet, but excellent overall.

12oz bottle. Label has best by date of '16AUG2023'.
Black colored body, with just the thinnest of a back lit edge. Consistent tiny bubble mocha brown foam surface covering. Leaves only a couple of small spots of lacing, as the foam surface follows down the body.
Aroma of deep dark roasted malts, translates to chocolate, laced with dark rich coffee. Barrel age whaft.
Taste adds in a little dark fruit that was hinted at in the smell, but this is a solid coffee and chocolate stout, with an oak barrel edge addition. Vanilla and a little oak too.
Thick, creamy and slightly sticky mouthfeel. No alcohol burn, although the barrel expresses throughout. Supportive carbonation.
Higher ABV% is warmingly felt rather than experienced as a burn. Overall seems quite ethereal, but has depth of flavors.


Magic Drip from Boulevard Brewing Co.
Beer rating: 95 out of 100 with 91 ratings