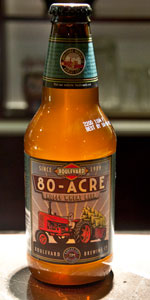 Notes: With roots in two of today's most popular brewing styles, 80-Acre Hoppy Wheat Beer is the result of careful cultivation by our brewers and cellarmen. Their efforts to craft a hybrid yielded a bumper crop of flavor; a delightfully distinctive ale with the aroma of an IPA and the refreshing taste of a wheat beer.

Flavor: Mild flavors upfront of lemon citrus and wheat. This then turns into a hoppy tart lemon and yeast flavor that lingers into the finish. There's a fruity and slight funky and juicy fruit flavor to the yeast here. (3.50)

Overall: Similar to the Boulevard wheat with more tart lemon citrus and yeast. The yeast has a slight Brett or wild yeast funk to it imparting some juicyfruit flavors. (Final Rating: 3.75)

4.16/5  rDev +6.4%
look: 3.75 | smell: 4 | taste: 4.5 | feel: 3.75 | overall: 4
Very hazy straw yellow with a decent foamy white head that hangs around and produces some wispy lace.
The aroma is pine and citrus with a bit of fresh bread.
The taste is citrus - lemon, grapefruit, orange, notes of pine resin and nice wheat malt for support. Hops are somewhat gentler than most IPAs and very complimentary to the wheat base. The finish is dry with a lingering citrus and pine note that makes you want more.
The body is light/medium and smooth in the mouth,decent lingering carbonation.
Altogether this is a very enjoyable brew, good as a summer cooler or just for enjoyment anytime, goes well with most food.

Reviewed by OK_Denise from Oklahoma

Reviewed by Sup_Sippin from California

Reviewed by Dourrieu from Florida

Reviewed by Snift_the_juice from Kansas

3.71/5  rDev -5.1%
look: 4.75 | smell: 3 | taste: 4 | feel: 3.5 | overall: 3.75
Not huge on wheats as to me, most taste the same, aside of course from our beloved Boulevard. This wonderfully hazed hoppy wheat offers a decent feel and nice conveyor of flavors. Honey Lemon, with slight pineyness and wonderful smooth finish. That's what she said. Another home run by KCs championship brew crew.
Jun 10, 2018
Rated: 4.25 by Richie_C_Johnson from Minnesota

I'm taking this one slightly out of my intended order, increasing in ABV, but I just revisited their Unfiltered Wheat Beer & it just seemed to make sense to continue with another Wheat Beer.

Having Pop!ped the cap, I felt as though a hard, heavy-handed, aggro pour was in order. This resulted in a mound of three fingers of dense, rocky, eggshell-white head with decent retention. Color was a deeply-hazy/lightly cloudy Yellow-Gold (SRM = 4 -5). Nose had an interesting admixture of black pepper, Simcoe-like cattiness, Cascade-like minty-pine and a light lemony citrusiness. Mouthfeel was medium, denser than their standard Unfiltered Wheat Beer. This was definitely bringing the hops in comparison to the previous one! I would say almost definitely that Simcoe & Cascade were involved, plus the wheat gave it a peppery spiciness. This kind of thing is exactly why I got excited when they announced their arrival. The finish was semi-dry, but very hoppy and entirely refreshing. If they were to CAN this, I would def put it in my cooler when headed for the beach! The Unfiltered Wheat Beer was likewise refreshing, but the inclusion of hops makes this beer my winner between the two.

Rated by Mark66 from Texas

Reviewed by dacas1 from Illinois