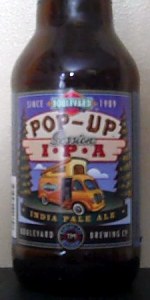 Notes: As a brewing team, we sought to make an India Pale Ale that showcased assertive hop flavor and aroma while maintaining a thirst-quenching drinkability by balancing the bitterness with a slight caramel malt character. A blend of our base pale, Marris Otter, and amber malts creates a simple, yet adequate malt backbone that allows Mosaic, Cascade, Amarillo, Citra, and Centennial hops to shine with bright, fruity, citrus notes. At 4.2% ABV and 41 IBUs, Pop-Up I.P.A. is a full flavored beer that’s suitable for all-day drinking.
View: Beers | Place Reviews
Reviews: 108 | Ratings: 680 | Log in to view all ratings and sort
Reviews by dkchandler:

From the can. Best session IPA I've had so far. Does not taste like a watered down IPA. Nice mouthfeel.

Enjoyed on tap at Genessee Royal Bistro in Kansas City. This hit taps in the city just recently, and comes out in bottles in early August.

Appearance - Brassy amber body with an orangish twinge that is mostly clear, just a touch of light haze. Head is sudsy bright white, about a finger and a half deep. Retention is good and it leaves a light sticky lacing around the sides of the glass.

Smell - Very aromatic, with bright citrus juiciness and floral overtones to add depth. Some of the grain pokes through as well, but the tone is overall fresh and enticing.

Taste - The aroma suggested a hop wallop, but the taste is much more balanced, with a malt element that takes the lead from a more subdued citrus and floral element. The grain is also much more aggressive on the taste than on the smell, with a rustic undercurrent of barley.

Mouthfeel - Light-bodied and moderate carbonation. Clean finish that lends to easy drinking. However, mouthfeel is a constant gripe with me on these "session IPAs". I must say, of those I've had, this one is a little better on body than some others, but still is lacking.

Overall, one of the better "session" IPAs I've had so far. The nose is especially delicious, and the taste is sufficiently meaty to live up to the IPA label. Also, at 4.2 abv, it's truly a beer you can have a few without getting lit. I have a feeling I'll be drinking this a lot around Kansas City as it becomes more widespread.

A: Pours a very lightly hazy medium yellow in color with moderate amounts of active visible carbonation rising quickly from the bottom of the glass and faint amounts of golden yellow highlights. The beer has a three finger tall sudsy foamy off-white head that slowly reduces to a medium side finger thick cap surrounded by a medium to large patch of very thin film and a thin ring at the edges of the glass. Significant amounts of lacing are observed.

S: Moderate to strong aromas of citrus/orange and citrus/grapefruit hops with lighter aromas of biscuit malts and just a hint of floral hops.

T: Upfront there is a light flavor of biscuit malts with a light amount of slightly sweet grainy malts and honey. That is followed by moderate flavors of citrus/orange and citrus/grapefruit hops with a very light amount of floral hops. Light amounts of bitterness in the finish which fades pretty quickly.

O: A very easy to drink and enjoyable session IPA with a strong amount of citrus hops and not much associated bitterness. Very refreshing and a good summer beer. This beer would be very easy to have a few of during a single session.

Clean amber in my pint glass. Little head or residual carbonation, but no points detracted as this is on tap, after all.

Nose is subtle. A little citrus and fruit. Not bad, but not standout, either.

Taste is pleasant and mild citrus. I get orange and grapefruit touches with a strong malt presence. Not bad but not one I'd return to.

I will, however, pick up a single bottle for comparison's sake.


Pop-Up Session IPA from Boulevard Brewing Co.
Beer rating: 83 out of 100 with 680 ratings