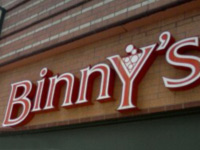 View: Place Reviews
Reviews: 17 | Ratings: 32 | Log in to view all ratings and sort
Reviews by Sparky44:

This place is an enigma. The older people who work there are kind and helpful. The younger people are pompous jerks who couldn't care less. I have heard these clowns rip the beers they sell. If we have it at this Binny's, it's probably not worth drinking. These same jokers carry on lengthly conversations with their friends while ignoring everyone else in the store. Besides that the selection is decent but not the best in the area. I know people who refuse to shop here or the other locations. I only stop when I have a jones for Spiteful beers.

A great place. Hugh selection of beer but also liqueur.

Smaller beer selection in an overall smaller sized store.
Does get some cool stuff in, but not the most massive selection

Drove here after calling to make sure they had a beer I was looking for (BA Naked Evil). About a forty minute drive from my house (and I probably pass at least 4 other Binny’s in the vicinity on the way here). But alas, I wanted the aforementioned beer thus I trekked on out to Buffalo Grove.

I walked in and noticed the beer selection immediately on the right. Not nearly as big as other Binny’s near me, though it still had a solid selection. I was pleasantly surprised to find some 2010 Cantillon Classic Gueuze (there were at least 12 bottles) sitting right there on the shelf. Needless to say I picked a couple up and enjoyed one last night.

Not many coolers with beer in it compared to other Binny’s I frequent. Service was good – I was asked if I needed help a few minutes into perusing the beer selection. While not the best Binny’s out there, it still has a pretty good selection, and you may even find a hidden gem or two like I did. If I am in the area I’d stop by it just to see if they have any lingering Cantillon.

I live down the street from this store. This does have a good selection of craft beer. However, the prices are higher then the surrounding areas. In addition, they do not have the section that other store in the area have when it comes to; 22oz, 750ml, and indiviual bottles. I do a lot of beer samplings with different couples and it can get expensive if you keep buying six packs. If you just drive a little farther in any direction you can find a store with a better selection and more in their coolers for immidiate comsumption.

First of all, this IS my local beer store. The craft and import beers are on the far right hand side wall. There are bombers on the top shelf of beer wall and some in the coolers. Plenty of 6 packs and cases for every level of beer geek.

The selection for the size of the store is outstanding! In the past year, the quality and variety has increased, especially concerning the US craft beer section. There is a NEW beer section/tower with a wide range of styles from across the USA and around the world.

Kyle is not only THE beer guy, he is MY beer guy. He is very friendly, has high beer IQ, can suggest and comment on almost every beer in the store for newbies or beer geeks.

This store has gone from very good to amazing, considering how limited the space is available.
Kendal is THE beer guy and has taken the craft beer selection, display and options to
a whole new level. Bravo!

Binny's is a solid chain, with a solid (or better) selection of craft beer at each location, and Binny's Buffalo Grove is no different. Although they have a noticeably smaller selection than their neighbors to the West, Binny's Lake Zurich, they still have a solid selection of Belgian and other European staples as well as all of the Midwestern goodies I expect from them.

Their staff is solid, and I have had a number of conversations with people in their beer department. Like most places, their non-beer people are not as informed, but they will find someone to help you.

The prices are on par with the other locations, and they will sometimes have great sales (Christmas, Belgian month, American craft beer month, etc.). The one downside is that their beer aisle runs up against the window, so anything sitting at the end for more than a few days might be lightstruck. Choose carefully, but overall you should find what you are looking for.

This place I have been to a few times, in fact I believe that it was the closest one to me until the Binny's was built in my hometown. The quality of this Binny's is just as good as all of the others, I was really pleased with the way that everything is laid out. The seem to now have a larger craft beer section in this store then I remember them having which is definitely a plus. This store seems smaller than some of the other Binny's that I have been to, but still seems to have relatively the same stock as the one nearest myself with just a little less bottles, and there is a smidge more international selection here. The service depends on if the beer guy is there. They are well trained individuals and will really help you out if you're trying to decide. If he's not there, well then it's a crap shoot. Overall, just like the others this is a damn fine store.

Made a quick jaunt over here with my boy VDubb86 this afternoon to check out the wares. After visiting several Binny's locations, I'm convinced it's the best chain in the country, much less Illinois. Seriously: Beastly selection, good prices, good volume, helpful service if you need it...what more could you realistically ask for? In all honesty, the selection at this particular location is somewhat smaller than the others nearby, but it's still pretty damn good. I feel so privileged to be back in the realm of solid chains.

It has the beer on the northern wall and the matching aisle on the other side. It is a bit smaller than the Lake Zurich Binny's. It has a lot of good stuff packed in a smaller space though.

Like most Binny's it has a nice selection of Eastern Euro imports, most of the Belgian beers were on sale as it was Belgian beer month.

There wasn't really much service and the cashiers didn't look very knowledgeable. It is a nice Binny's for the area, but if you go a little west to Lake Zurich that Binny's is bigger and better.

This is the place I frequent more than any other in the area. Selection is pretty good, especially for domestics. Great Lakes, Founder's, Dark Horse, Bell's, Goose Island (including reserves), pretty much all the high quality Midwestern beers, as well as your typical, not too hard to find Mountain/West Coast stuff. Decent selection of Germans, and a pretty good selection of Belgians. You'll find Ommegang, Chimay, Duvel, The Bruery, etc. always in stock.

Service is fine. Mostly hands-off. Occasionally someone may ask you if you need help, and they always seem to know what's in stock (especially in-demand/special stuff). They seem pretty knowledgeable, however, I never ask for help, so I couldn't tell you too much.

I rated the value as inexpensive 'relative' to other places in the Chicagoan suburbs. If I was in downstate Illinois, some of these prices would seem ridiculous, but for the area I've yet to find a place that beats Binny's overall. Sometimes you can find deals that beat them, but on a consistent basis Binny's has the best prices.

The biggest knock on this place, as other people have mentioned, is the huge window that a lot of the beers sit next to. Thankfully they have made it the area where it's mostly ciders that sit next to the window, however when I was there tonight, I noticed overstock of Dark Horse and some others that were sitting literally in the window. For me this puts a knock on the quality as I don't know what other overstock has previously sat in the window. I wish they would fix this problem.

In short, I love coming to this place. The entire right wall, which is about 100 feet long, is lined with specialty beers, some of which you can find chilled in an adjacent section of the store. The employees are helpful and can make good recommendations for beers to try. It looks like the beers are separated by country, and within each country, by price, so if you have a certain type of beer you are looking for, it's relatively easy to find. They frequently have sales on specialty beers, so I like stopping by every so often to check for specials. The store as a whole is well-organized and very clean. I have never had to fight any crowds here and have always felt comfortable while in the store. Overall, a great liquor store with more types of beer than you can ever drink.