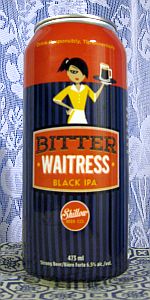 Notes: Aggressively bold, earthy, and intense, Bitter Waitress Black IPA has every right to be as bitter and dark as it wants to be. A medium-full bodied ale loaded with hops and balanced with roasted malts and hints of black licorice.
View: Beers
Reviews: 10 | Ratings: 40 | Log in to view all ratings and sort
Reviews by BigGruntyThirst:

It's lamentable that many waitresses are encouraged (or even expected) to use their looks to generate sales. Mind you, Bitter Waitress should have no problem in that regard: the silky, ebony beer and its subtly clear chestnut highlights are certainly eye-catching.

The taste follows suit, offering a selection of roasty malt and resiny hop flavours. Neither element is as pronounced or impactful as on the nose, but tiramisu and mocha desserts as well as herbaceous, forest-y, somewhat umami-like qualities continue right through a long aftertaste.

Among the most important components of any beer are flavour and drinkability, and specifically the balance between the two; mass-produced beers are intentionally bland so as to be widely agreeable, whereas micros are often guilty of making excessive, extraordinary beers just for the sake of doing so.

In this regard, Black IPAs can be the crown jewel in a craft brewer's portfolio: done right, they highlight deep, dark concentrated flavours yet offer casual drinkability. This one does exactly that; it has the flesh suited to the higher alcohol (6.5%) but drinks without a fuss. It's not overwhelming nor uninteresting.

Bitter Waitress is actually quite the character if you get to know her - and she packs quite a flavour punch! This is exactly the brand of earthy, pungent, bittersweet Black IPA I enjoy best (even if it isn't the best example I've enjoyed). I'm not keen on the marketing but the liquid doesn't need changing.

473ml can, no racking gate on it - poured a dark brown with amber highlights and a sticky 2 finger mocha colored cap. Aroma is demure but distinctly in profile for Cascadian ales (AKA "black" IPA), floral hopping over some roasty-Java robusta tones and a light malt graininess. Flavor profile goes from rich roasty malty front side to an increased lightly complex dry-bittering to a clean bitter-roast finish where the char of the black patent malts compliments the long-boil hopping - light acerbic after taste. Very refreshing and drinkable with a sharp roasty bitter character and a silky mouth feel - nothing over the top but a solid pleasant crafted Cascadian black ale.

Can: Poured a black color stout with a nice brown foamy head with good retention and some lacing. Aroma of dry roasted malt with some light piney hops notes. Taste is also a mix of piney hops notes with loads of dry bitter roasted malt notes. Body is about average with good carbonation. Not bad but hops profile could have been amped up.

A very handsome looking beer. Walnut black with a big chunky head that settles to a substantial film and gives lots of lace. There's some metal and alcohol in the nose, along with ashiness. Malt is lurking in the background but takes some looking for. Also just a whiff of fruit. A very plain Jane brew to taste. Quite ashy, just a hint of malt. A suggestion of dark chocolate. Comes across as flat in character and finishes with understated and persistent dryness. Mouthfeel is somewhat watery. Beyond looking pretty hot, it's not a really memorable brew.

Pours jet black in colour, capped off with nearly two fingers of creamy, light beige-coloured foam. Excellent retention; the head lasts seemingly forever, surviving past the 10 minute mark as a dense, generously-sized cap, depositing gobs of beautiful lacing as it recedes. I am getting treacle, butterscotch and licorice on the nose, with additional notes of cocoa, coffee and some piney, earthy hop undertones.

Rather rich-flavoured - malt-forward even for the style, but equipped with a comparatively mild hop bill. Roasted malts impart enticing flavours of coffee, with minor hints of cocoa, caramelized sugar and dark fruit. The bitterness begins to ramp up on the back end, supplying notes of citrus and pine resin soon joined by an earthy, roasty "coffee grounds" astringency. Herbal licorice at the finish, with some dirty, roasty bitterness lingering into the drying aftertaste. Medium-bodied, with restrained carbonation levels that lightly and continuously prickle the palate. This black ale feels smooth, soft and slick on the tongue; very satisfying to sip, with no sign of the 6.5%.

Final Grade: 3.98, a B+. I'm really enjoying my glass of Bitter Waitress. There's no doubt that this is a tasty little beer, but the rather subdued hop flavours prevent it from being a brilliant example of the style. It's more reminiscent of a well-hopped stout than anything - so the emphasis was on the 'black', but not so much on the 'IPA'. Grading by style, there's definitely room for improvement here, but if you're looking for something with big roasted malt flavours that leans toward the hoppy side, then this brew is worth some serious consideration.

Got this one at the LCBO this past summer

From a can into a snifter

TASTE: Roasted notes, licorice and some earthy hops up front. Notes of chocolate, roasted flavors and grassy hops at the swallow, moving into a bold and lingering finish of bitter hops, grassy flavors, licorice, and notes of bitter chocolate. Pretty flavorful.

PALATE: Slightly thinner body and medium levels of carbonation. A bit watery on the palate, goes down fine and finishes a bit dry.

OVERALL: Ok. Nose is better than the flavor perhaps and the feel could definitely be a bit creamier, but this is still a good brew all around. Worth checking out if you like the style. Cheers!