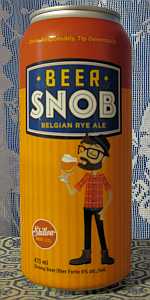 Copper and hazy with moderate carbonation. Topped with 3 fingers of yellowish head.

Got at Summerhill LCBO, drinking in New Hamburg, July 9th, 2018.

Pours a nice clear gold with a fluffy white head of about two fingers. Quick break and little lacing.

Smell reminds me of a Belgian beer. Yeasts and sugars are noticable, bit then the spice of the rye comes on and reminds you of its true style.

Taste is interesting. It's a rye beer on the start. It has the spice and zing you look for, then it sort of jams out the Belgian aspects...yeast, fruitiness and candi.

Feel is about medium with good carbonation. Finish is a little sweet and dry to my palate.

Well, as a hybrid beer it is interesting. I was surprised at how well the rye blended with the Belgian aspects. I'd have it again.

473 mL can from the LCBO; can't find a packaging date, but I think I might have inadvertently smeared it off at some point during handling. Served slightly chilled.

This unfiltered ale pours a foggy, translucent golden-blonde colour, fitted with a half-inch crown of soapy white foam that disintegrates completely within the next five minutes. A thin collar and some wisps on the surface stick around, though the appearance is boosted by the presence of a narrow band of smooth, even lace. Spicy rye bread is the most noticeable aspect of the nose, followed by the Belgian yeastiness, which manifests itself with hints of clove, pear, and just the faintest suggestion of banana. Hints of grassy hay, lemon zest and flowers; fragrant and enticing.

A pretty solid hybrid ale - and they didn't skimp on the rye, either, which suits me just fine. Toasted rye grain, bready sweetness and lightly caramelized malts come through at first, with subtle, fruity esters of orchard fruit surfacing soon after. The profile becomes decidedly more Belgian on the back end, with yeasty notes of clove spice and black pepper featured alongside grassy hay, lemon pith and mildly floral hop bitterness. Finishes spicy and yeasty, with lingering astringency in the aftertaste that dries the palate out efficiently. Medium in body, with moderately assertive carbonation levels that feel crisp and a bit prickly in the mouth. This one's drinkability is fairly high, limited only by the latent astringency towards the finish, which probably will not be everyone's cup of tea.

Final Grade: 4.01, a well-deserved A-. Shillow's Beer Snob isn't nearly as pretentious as the label deliberately implies it to be. True - the combination of rich rye malt flavours and spicy Belgian yeast character isn't likely to appeal to the macro-swillin' crowd - but it's well-constructed and interesting enough that I'd expect most seasoned BAs to give it a thumbs up, rather than down. Good stuff, worth a try - given the lack of quality, year-round rye beers in this province, I expect I'll be picking this up every now and then.

Can from the Beer Store - pours a hazy burnished gold with a neat 2 finger rocky cap that lasts well. Aroma is pungent with spicy rye notes, bread dough and floral-spicy hops, smells delish! Flavor is an amalgam of spicy rye and hops, light malt sweetness fruity esters and increasing bittering - almost gives the impression of a spiced ale....finishes sharp, spicy, lightly bitter and dry. Medium bodied with a rigid malt spine, with 6% strength this is a substantial and satisfying rye ale - well put together and tasty as well as robust.