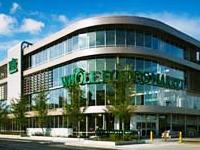 "1550 Brew" bar located at NE corner of the store, near the front entrance.

View: Place Reviews
Reviews: 19 | Ratings: 35 | Log in to view all ratings and sort
Reviews by sweethome:

I'm rating for a combination of the bar (yes - there is a bar at the front of the store) and the beer selection in retail. Not bad selection in retail - but you can do better up the street at Binny's. Overall, better than most Whole Foods and just about all grocery stores - but not up to Binny's.

The bar is the bomb. Good price, about 16 tap lines, all quality beers. They sell flights for $8 - 4 4 oz pours. I had Goose Island Bourbon County Stout (are you kidding me! this is $8 for slightly larger pour at the Goose Clybourn pub two blocks away!!) a Sierra 30th Anniversary; a double brown from Half Acre (local beer); and Saison DuPont. Best bargain in town. Other great beers on too - Double Bastard from Stone for one.

A great place to enjoy a beer and nosh on WF food. Servers are cool - not he most knoweldgeable - but it's Whole Foods - and they do know their stuff pretty well.

12/3/17 - Went early for the KBS release. Store has a very wide selection of great beers, and a dozen plus on tap. Founders had a tap take over, I had a blond boom draft, excellent. Workers and managers ran a well organized event, they took care of everyone who showed up before allowing second purchases.Thank you for a job well done, and I look forward to my next visit.

i know two of the guys that work at the red star bar so service is good.. one of the best "rare" beer lists in chicago especially that no one knows about..

We drive past another Whole foods just to go to this one because you can get a good beer while you shop. They always have something interesting on draft. A couple months ago they had "Evil Twin" day with 4 different ones on draft. You can spend hours in this grocery store sipping good beer, and the guys (and girls) behind the bar know their stuff well. They also have lists you can put yourself on for some of the more special beer shipments.

As for purchasing beer to-go, the Binny's just down the road has consistently lower prices.

I stopped in here on a lark one day to see what was what. The vibe is just like every other Whole Foods on Earth, but larger than most I've been to. For whatever reason, I just never feel completely comfortable in these places... The excess noise from the good amount of foot traffic certainly doesn't help this one much, especially at the bar, which is already not ideal due to its incredible openness. The beer section is larger than most WF locations, with a pretty nice selection (especially considering the place is, after all, primarily a grocery store). At the bar, the selection is actually pretty impressive, with some taps you don't really see around at too many other places in town. I didn't find any staff to interact with in the beer section (nor did I really need to, as I was just browsing), but the bartenders seemed generally to know what I was talking about, though I didn't press them about the beers (nor did I really want to). The prices are pretty reasonable, especially considering the setting: a posh-ish grocery store in Lincoln Park. Overall, a nice source of bottles in the area (though the nearby Binny's and other liquor stores seem better in most cases) and a decent bar, especially if you're looking for a drink whilst shopping.

I do my weekly shopping here so it helps me to actually kill three birds with one stone, groceries, beer, and a drink. When you first walk into the store to the left is a bar. They always have about 10 beers on tap, most of the time they are nice locals but they always have random stuff. The beers are universally pretty good, almost always something to tick. The beer selection is pretty good for a grocery store. They have a cooler that has about 60 6 packs to chose from and another 50ish bottles to grab on the run. Great locals and most staples. They also have about 50 other beers that are not in the color, mostly the singles just not being cooled. They have a pretty knowledge staff. They have most of the GI beers and usually have some Three Floyds. Random beer events is solid.

Not a destination spot but a place worth going to get staples, especially with discounts for buying more than 12.

Whole Foods is just known to be more expensive because its organic. Seems to me that less preservatives and additives should equal less expensive, but go figure.

Their liquor department isn't very large and they don't have that outstanding of a selection, but then again this place is an all around grocery store.

One thing that they do have that I was kind of surprised of was a bar, with a decent selection of beers on draft. They had an impressive array of Stone beers which really blew my mind, even some rarities such at 07 Old Guardian and Smoked Porter with Vanilla Beans.

This place isn't bad and they actually have decent parking for being downtown Chicago. I'm still not a major Whole Foods fan though, but it was a cool place.

For a grocery store, this place is the shit. First of all, they have a two separate bars - one near the front of the store that serves beer and another in the middle of the wine section. Plus there is this whole ready-made, take-home, eat-in, food court section. Different than any other grocery store I've ever been in, but it works. It works well.

The beer bar offers a respectable selection of local beers on tap and in the bottle. I've been a few times now and there always seems to be a FFF, a GI, a New Holland, a Half Acre, and a 2Bros. The other taps come and go, sometimes different brewers, sometimes more from the above. The bottle selection is very limited, maybe 10 bottles, but the prices can't be beat. $2 for any bottled beer. Incredible. Plus, you can walk around the store with your beer - you can drink a beer while shopping for your beer.

As for the selection in the store, it seems to get more impressive and just a little larger every time I go. Very nice blend of craft beers, with a heavy tilt towards the local brewers, along with a very nice selection of the more respectable imports. Prices are fair, though I have caught more than a couple deals.

I know this place is really just a juiced up grocery store, but its always a pleasure to shop here. I guess they've really figured out how to part this fool from his money.

Update October 2009:
This place is now HUGE, and has separate wine and beer/coffee bars. They even have wine machines that dispense servings by the ounce. The bottle selection is not much different from what it was, disappointing given the size increase. The bottle offerings, mostly chilled, were diverse and seasonal. Not much different, but good prices one as few, well worth a bottle stop.

The real prize is the bar, with 16 drafts, all for $6 or less, including La Folie Sierra's trippel, Goose Saison! and Naughty Goose, Founder's Breakfast Stout, and Furious. Really nice. Plus a selection of "Everyday $2 bottles" including Two Hearted, Founders Red Rye, and several other midwest micros. On draft beer flights (5 4oz pours) for $8 are offered, and snacks and full bar drinks are offered as well. It's at the front of the store, not secluded, but an easy place to sit. Good bartender. Worth a stop in the area.


Original review 2008:
I must correct drdc, this place surprised me.

Quality looks fresh as it's busy here and they do nice turnover.

Didn't really test the service, but the coffee guy I conversed with said the beer person is very solid, he came from Austin, their headquarters, and helps open and run new stores so he's in the know.

Nice one isle beer row with 4 shelves of singles and bombers. Cooler has a further selection mostly 4-6 packs. Some unusuals, Fantome, Jolly Pumpkin, Southern Tier six packs (I see mostl bombers elsewhere), nice collection of Belgians, could use a broader selection of micros, but not bad.

Just saying, if you're in this neighborhood, and the Sam's is nearby also, check both before you commit to something special, this place might have it and be cheaper.