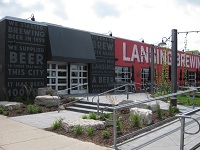 Place is very large with as area for parties/large groups. Nice size bar and lots of available tables. Large parking lot. Beer selection is goid, 24 taps into bars. Good good menu. I tried the nachos. Different than most others but very good. Will be back.

The food is great along with the atmosphere. The beer is serviceable, but not that great in my opinion. They do have a good variety of beers to try though.

I really like LBC. My only real critique is that it tends to get pretty loud; it's a huge warehouse with almost zero soft surfaces. It can sometimes be difficult to hold conversation. Other than that, the place is fantastic. Good food, good beer, great service, and a very knowledgeable and friendly staff. A good selection of beer, plenty of offerings so that just about everyone can find something palatable. Also, they use spirits distilled in the town just west of Lansing for those who don't want beer at all (these people are weird, but they do exist). I heartily recommend stopping in!

Big warehouse setting that was hopping on a Tuesday around lunch time. The first thing we noticed was that a lot of people were just there to eat, which speaks to the quality of food. The beer is excellent too, especially their flagship amber cream ale. We liked the variety as well as the lower ABV's, which is always a plus for those of us who have to drive.

Service was the real highlight of our visit. The girl who seated us immediately noticed that our table was wobbly and found something to shove under the legs to steady it. Our server was very pleasant. Prices seemed reasonable for both food and beverage. We will be back.

great atmosphere with a fun staff. food and beer are always well made and appealing to the masses

Great selection of beers! I think there were 8 on their rotational menu and at least that many in their year round variety. A good size beer garten, it had just finished raining when we got there on a Saturday early afternoon. When we were leaving they were seating people outside and had already set up the bean bag toss. Our server Jessica, was very knowledgeable and helpful with beer and food selection. The cheese dip with and pretzel and wanton chips was good. My sandwich, Smoke me Smoke me was good. Had hoped it would be more flavorful. My wife's sandwich, a twist on a French dip was better. When I am in the area again I will try a different sandwich. The beer alone is worth the trip.

My wife and I went here with another couple to have lunch and to try their beers. The brewery is located in a red and black-painted building on a busy commercial street at the edge of the downtown area. A parking lot is adjacent. A patio with seating is alongside the building, and it is supplemented by some picnic tables in the adjacent grass. A row of hop bines is growing along the sidewalk that someday will become a patio privacy screen blocking the view from the street.

The interior is a long, narrow space that is sectioned with a wall midway that can be closed off for private parties. We were fortunate enough to arrive early enough before it was closed off for an event, so our server was able to get some of the beers from the back bar for us. Turns out that most of the brewery's best beers were tapped back there.

We ordered a sampler flight of 8 various styles of the 17 available beers. We felt that all but one of them was brewed very well to style, the one exception being the Peddler's Porter. It was a tasty beer, but it just lacked something that we were unable to define that would make it taste more like a porter. All of the other beers were scored in a range of 3.75 to 4.25 (out of 5). The most notable one was The Hermit Old Ale.

The food menu has a great variety of offerings, and our choices were very good. Most of the preliminary hype that I had heard about this brewpub was that the food was very good and the beers were just okay. I'll differ with that assessment because I think the beer has caught up to the food. We were very satisfied with our visit here, and will return when in the area again.

I visited LBC with my wife and three children ages 15, 14 and 12 yesterday for the first time. It was around 5:00PM so a steady stream of downtown professionals were coming in and out of the place. LBC did a fantastic job setting up their facility. I didn't explore the entire brewpub but everything was shiny and new, which it should be for being open less than a year. There was plenty of available seating and just enough flatscreens so that you could watch a game if that's your thing but easy to ignore if not.

I have to admit, I came here more because I heard the food was good. That's why I brought my family with me. Our server was outstanding! She was very attentive to our table the entire time.

I started with the Angry Mayor IPA. Solid but not earth shattering. I would definitely drink it again and enjoy it again. I followed that up with their DIPA. Another solid effort, it had a great nose. I wouldn't put it in the same league as Double Trouble, Oracle or Hopslam. But I would enjoy it again in the future. LBC had approximately 12 beers on tap.

The food was mostly good but had flaws. My wife asked for her burger to be well done and it was medium to medium rare. I will never get her to go back to LBC for that alone. One kid had the short rib sandwich with fries and she loved it. My other two kids had chicken fingers and fries - what can I say, they're kids. I had the beer battered fish and chips and they were outstanding! I would have it again. We also ordered a loaded nachos appetizer with brisket added. The nachos were good but pricey - $8. The brisket add on was $5. But worst of all, there was just enough brisket on the nachos to say it was there. And a lot of the chunks of brisket were more fatcap than meat. Gross! $13 for fatcap nachos is terrible value.

Aside from my food complaints, I enjoyed my visit to LBC and I will definitely go back. Without my wife, of course.

12-15 beers on tap. I enjoyed all of the ones I tried, and a couple were exceptional. Food was above average. Pretty busy place. My only complaint is the service- very slow and our waitress obviously couldn't care less about us. In addition, I purchased a growler and they gave me the wrong beer. The tag had the beer I received crossed off and the beer I asked for written over it, which makes it pretty obvious it was intentional/incredible laziness. Probably won't be returning for that reason alone.

12 on tap, good representation of styles. Give them some time to dial them in, all nice but only the Black Velvet I considered taking home of the 7 I tried. Crowlers available as well, everything on tap was game, so that was nice.
Slightly industrial feel, large open spaces, some cornhole areas indoor and out. In an upward trending area of town.
A little busy and still getting their feet under them service wise.
Feels like equal parts restaurant and brewpub. A nice addition.