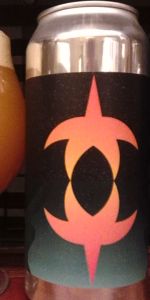 Notes: DIPA version of the Orange Starfish; brewed with Citra and Galaxy hops.
View: Beers | Place Reviews
Reviews: 84 | Ratings: 455 | Log in to view all ratings and sort
Reviews by JerzDevl2000:

Traded for this a while ago, but the date on the bottom of the can was not completely legible so I have no idea how old this was when I cracked it open on this hot night! Saw the lofty rating for this and even though this can wasn't fresh, this was as big and enjoyable a juice bomb that I've had in quite some time, and easily one of the best New England IPA's that I've ever been able to review here at the house!

Good pour to this as the liquid looked like pure orange juice, with just a bit of a darker hue to it. Enough head topped this off but that didn't translate to the lacing as the bubbles were only seen near the top of my pint glass once I started to work my way through this. Loads of orange, tangerine, vanilla cream, garlic, scallions, and tropical fruits in the nose as the juiciness really burst through in the taste. Slick, smooth, and sweet, there was an underlying hint of spice that livened things up and complemented the initial taste that hit my palate and somehow, it worked! Candied citrus and an underlying dankness rounded things out as this beer didn't stay in my pint glass for very long!

The amount of alcohol in this was spot-on as it was present, but hardly felt, with all of the flavors complementing each other quite nicely to go along with the moderate carbonation. A juice bomb if there ever was one, this was more than one-dimensional and left me wanting more. In the end, isn't that what any good beer should have as it's parting shot?

Not quite the smoothie-feel I was hoping for, but has a malty and dense texture.

Another thanks to Drew. No can date.

Taste brings some toasted grainy malts, cereal with more fruity pebbles again, plenty of orange and citrus blended with very creamy almost lactose like flavors, loads of pith and orange juice pulp, some mango and pineapple, a bit more generic tropical and generic citrus, big sweet malt in the background, not quite syrupy but almost there, and touch of alcohol warmth, hops get a little spicy and chewy later, and more like candied orange, sticky finish too.

Mouth is med to a bit heavier bod, touch of warming alcohol, a bit syrupy and thick like, nice fluffy carb

Overall not bad, I like the regular a lot more, this was good but seemed like it was over doing it in almost every aspect and you lost all the nice characters of everything.

A: Pours an extremely murky deep gold with about two fingers of eggshell-colored head. The fullest of haze on this.. It looks almost brown in the glass due to the lack of light passing through the liquid. Head sticks around seemingly forever. Seriously, I'm now almost done with the glass 30 mins later and there still a layer of foam sitting up top. Tons of beautiful lacing too.

S: Up front, I get a ton of that orange/vanilla creamsicle/sorbet thing that Galaxy-hopped beers sometimes give off. In fact, this is probably the greatest intensity with which I've picked up on that outside of the nose on Tree House Green. It's huge orange, sweet doughy malt, and some peach and mango right behind that citrus explosion. On the backend there's definitely a piney/woodsy earthiness, what some describe as "Galaxy dankness." Aromatic intensity isn't as huge as I'd expect for an 8.3% beer, but the profile is pretty damn nice.

T: So I mentioned a comparison to Tree House Green on the nose... When I taste this, first thing that comes to mind is that killer flavor profile on Green. It follows the nose almost to a T... Insane amounts of what I can only describe as dank, musty orange creamsicle. It's so much raw orange, but with an almost vanilla-like sweetness and a creaminess that seriously makes you think you might just be drinking a melted down orange sorbet. Accompanying this are BIG flavors of peach, mango, a little bit of pineapple, an assertive sweet doughy malt presence, and a whole lotta earthiness on the finish. The earthy character is hard to pin down, but it's kinda herbal, kinda woodsy, and a little piney. I'm not getting any vegetal 'sweaty onion' notes from the Citra, and not much 'raw hop' flavor. Just straight dank citrus juice.

M: Pillowy soft mouthfeel on this, super delicate as it glides right across the palate with silky smoothness. Medium weight on the tongue is probably my biggest criticism of this beer--it almost drinks like a 6% beer with how light it feels (for the style), which offers extraordinary (yet dangerous) drinkability. I think a slightest heavier weight with add to the 'sorbet' flavor and soft carbonation to really create a 'creamy' mouthfeel, but that's largely preferential. I could definitely see others preferring the lighter body. There's a medium orange peel-y bitterness that comes in on the finish, and it does well to balance out that moderately sweet doughy malt character. Really really good stuff.

O: My goodness. I had high expectations for this one, but it has exceeded them. I know I've really harped on this, but this seriously reminds me SO much of Tree House Green. It's missing the brewery's signature 'bubblegum' yeast flavor, and it definitely doesn't have that creamy, full mouthfeel that the TH IPAs offer. But the flavor profile is spot-on, with a TON of fruit (orange sorbet, peach, mango), a pretty assertive malt presence (sweet and doughy, yet still light), and a bunch of earthy dankness. This is absolutely delicious, one of the best DIPAs I've had this year. Need more from Aslin!!

Poured from the can into a Spiegelau IPA glass.

Palate just really sings impecably. Big hits on the first sip of orange tea and sweet herbs. There's a candy like citrus of pith and marmalade than kicks in with a rich malt backbone, that gives an excellent chewy body. Green herbal and more zesty orange oils on the finish, with hoppy oils that just cut and coat everywhere.

Just a ridiculously good IPA. Not varied, but just getting the basics in exceptional manner.

F: thicker mouth feel than a classic IPA. A bit too much carbonation, for my taste.

Eru food and better than other of their offerings but I won't drive that far anymore when i pass veil and triple crossing to get to these guys! I hadn't had a beer that WOW'd me but i may do in line trades at veil for rhem to give them another shot

Freshly zested orange peel is definitely the first thing you pick up smell wise and this monster is very juicy. The look of hazy orange juice is definitely an east coast IPA look but on par with green or julius from tree house or trillium vicinity.
Awesome beer

16 oz can, undated, poured into a teku

A- A hazy/murky orangish copper with a two finger white head.

O- A solid NEIPA, but seems like it might be a little past it’s prime based on that other Orange Starfish beers from Aslin.