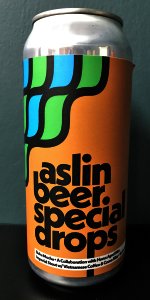 Poured into a teku glass via can

color is a mahogany brown with tan foam

and mouthfeel is a bit light for an 18% beer

The beer pours a fairly voluminous brown head that dissipates fairly quickly. The beer itself is a nice dark chocolate black with a good melted chocolate note that looks pretty good and seems to be a bit of a thicker coffee.

The smell is pretty good. It has a nice mix of the bitter chocolate coffee note and the sweeter cocoa note.

The taste is absolutely fantastic. It has a delicious mixture of a bitter chocolate coffee note and a sweeter cocoa note to it. The sweeter cocoa seems to linger in the finish.

The feel has a heavy body with a soft and velvety texture to it. There is a good biting carbonation but is very light along with a light acidity from the coffee.

Overall, this is a pretty good beer with a fantastic taste and good smell. This is definitely worth getting one's hands on if you come across it.

5 oz pour on tap. Pours pitch black with almost no head. Aroma and flavor feature dark malts, sweet chocolate, vanilla, and smooth coffee. Mouthfeel is creamy and incredibly smooth for the 18% abv. If I didn't know it was 18% abv I would've guessed maybe half that. Impressive.

Brown to deep brown and clear on the edges. No head on a pour or lacing on a sip.

Taste follows the nose with sweet coffee, cinnamon, malt, a bit of lactose, and cocoa.

Mouthful is medium to heavy, smooth and syrup like. Carbonation is low. Finish is sweet.

This is an awesome non BA Stout. The nose and flavor profile are spot on for Vietnamese Coffee - cinnamon, sugar, and milk. The mouthful is heavy and coating with a sweet finish. Very drinkable and can't believe this is 18% (per Instagram). Hard to find anything wrong here. Almost thinking barrel aging would be detrimental. Highly recommended.

S: Coffee with sweet dairy, cinnamon, cocoa, roasted malts. No sense of alcohol at all.

T: Follows nose. Coffee and dairy up front with cinnamon, cocoa and roasted malts through the end of the palate. A bit of alcohol heat, but not much at all for the ABV.

F: Surprisingly medium bodied. Not much carbonation. Good construction and balance. Still something wanting here on the feel, but drinks well.

O: Heck of an effort. Supposedly this is not to be aged, so I'll enjoy over the next month or so.

Can dated 5/31:
Pours quite dark and slick from the can. Head on first glass was light, tan, and fizzled fairly fast. The second pour had a darker head that lasted a little longer, but still ended up in the same state of having no bubbles left to look at. Oil slicks are left on the glass with a swirl, though.

Nose is a nicely constructed combination of sweetness, dark cocoa, and coffee. It sweetness adds a little vanilla aspect (that I don't think is added). There is a very faint banana note as well.

Taste starts with a typical Aslin sweet roasted aspect. I presume this is a milk stout, though it's not indicated. It's a pretty sweet beer, and if lactose is aiding, that's one thing; if not, not sure where it's coming from. In that sweetness is also where I get a banana note - almost banana pudding in the background when the initial sweetness is added. More cocoa in the middle of the taste, with a struggling coffee note in back.

This beer is slick bordering on silky, almost no carbonation. There is not really any heat from the high ABV (thinking the sweeter aspects might help hide it).

An okay beer that I didn't feel really let the coffee come out in the flavor (it was nice in the nose). It was also a little too sweet for my tastes, even as a milk stout (presumedly).