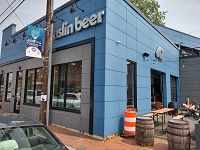 Reviewed by Ajtucker350 from Virginia

4.19/5  rDev -3.2%
vibe: 3.5 | quality: 5 | service: 4 | selection: 3.75
V - Interesting. It's just a double garage with a brewery inside with a little table for ordering cans. Everyone is nice, but somewhat sketchy.
Q - If the sketchiness of the place worried you, fear not, the beer here is absolutely incredible. Quality is top notch for all styles.
S - People are friendly enough - the line moves fast
S - They sell out pretty fast and you only can choose a few styles per day, but the quality is just unbeatable that you can look past the small selection.

Reviewed by PorterJohn from Virginia

4.59/5  rDev +6%
vibe: 4.5 | quality: 5 | service: 4.75 | selection: 4
Pretty much my favorite Brewery right now. Can't wait for their Alexandria location to open with the tasting room. I also wish some of my favorite beers were available more often, but understand enjoy that they are constantly experimenting with new recipes.
Jun 14, 2019
Rated: 4.34 by Shaymus from Massachusetts

Reviewed by VeganUndead from Virginia

Reviewed by MMcdon8267 from Massachusetts

Reviewed by carlitos92 from Texas

The location is pretty far out there (near Dulles in Herndon), in an unassuming warehouse area. Personally, my vibe was intense because I was looking forward to good beer, but I have to temper that with the admittedly low-key (borderline ramshackle) merchandising approach here. Wait in a line (which would normally be sketchy if not for the awesome craft brew community in the area) and sortof do a "Soup Nazi" routine for 4-packs of beer to go, through a rolled-up overhead door. Merch is also available - some of it very cool.

The beer quality is off the charts. Aside from the initial beer I had which led to constant dreaming, everything else I've heard described sounds like an intriguing recipe. I've had 5 of their beers now, and every one of them was fantastic. All in a class of their own. A DIPA with vanilla beans? Why not.

Service was great. Aside from the pressure of having 50 people behind me in line, no complaints. They like beer, too. They get it.

Selection was great, given the quality rating. If you only drink stouts, you might be disappointed, but you'd also be wrong. If you don't like IPAs, Aslin probably makes one that will convert you. So I can't fault them for not having 30 different beers available. The ones they do have will knock your socks off - so shut up and try something new.

All in all, these guys are onto something, and I only wish they had some serious distro and/or a taproom to make it a little easier to enjoy their art.

TL;DR, if you're in the DC/MC/VA area, go check these guys out. They deserve it and frankly are worth it.

Reviewed by Nichols33 from Massachusetts

Located in a strip mall with limited parking and not much of an area to line up, we just stood there until they opened and then went to the garage door opening where a table was set up and they asked you what you want. Super friendly people working the 4 "registers" but not much of an experience.

The beer is quite the experience though.

Rated by Bovice703 from Virginia