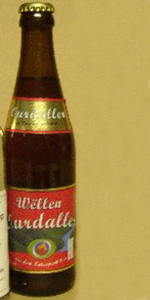 33cl Twisted & Curved Flute Serving Glass.
Tasted from the Bottle at the Brasserie Cornelyshaff Brewpub on 19th April '03, during a Brewery Visit.

Appearance: Cloudy & exceptionally turbid. A confused appearance, with the yeast flocculate matter continually rising, pushed upwards by surface bound CO2 streamers, then falling under gravitys pull when it gets there - only to be captured by another streamer to repeat the process all over again. Dense cloudy dark orange appearance with a very smooth tight white head, that sticks to the beers surface. Massive inherent carbonation leads to a multitude of streamer activity that never secedes. Looks like a Luxembourg Beer Lava Lamp!

Smell: Slightly acidic, quite sharp nose. Rescinds in strength as the beer warms. Strong malty nose with some other organic type smells that I find hard to describe, less say they are agricultural.

Taste: Very sharp. A cutting acidic taste introduces the beer. This soon fades to make way for a strong malty middle & a fruity finish. The ending has a taste of soft mango & water melon. Quite the beer! It kind of smacks you in the face, beats you up  then picks you up & drives you to hospital.

Mouthfeel: Explodes in the mouth, due mainly to the high CO2. This somehow helps to increase the spritzy, lively mouth puckering feel.

Drinkability: Split our group 50-50 again, the more commercial drinkers finding it hard to drink more than a couple, whilst the more adventurous drinkers eventually taking to it once they got over the initial shock. A rugged beer that those with delicate palates may find hard to drink.

Overall: Advertised as being made only from natural ingredients produced by the local farmers in the Cornelyshaff Co-Operative. It uses Buck Wheat as well as other Special Malts. No other additives are used. This, like the Waïssen, makes for another aggressive offering, albeit this time an amber colored strong-ish lager. But yet again I find that once I get used the alternate style, and the rough-cut edges, it grows on you. Another unique beer from Cornelyshaff.

Beer poured a cloudy amber color with a slight tan head and a decent ring on the edge. The nose was a bit sweet and citrusy, pleasing. The taste was citrus, slight caramel. There was also a nice hop bitterness on the backend which made for a well rounded and dry finish. An easy beer to find now in Luxembourg supermarkets, at least at Cactus.