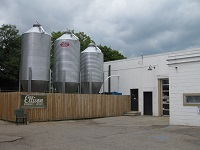 My visit was a great disappointment. On a Saturday afternoon, Ellison had only two people serving customers. After waiting 15 minutes for a server to greet us, we were told by the folks at the table next to us that they had been waiting 50 minutes for their food, which had still not arrived. We didn't have the time or inclination to wait that long, so we left, having tried nothing.

In an old industrial area. Bare bones, but cool vibe. I visited on a Sunday afternoon. They had outdoor seating with a food truck in the parking lot. I went inside and sat at the bar. I tried a few beers, which were good. I did not try the spirits or cocktails. A 3 piece band started to play as I was leaving.. Cool spot, glad I stopped.

Small brew bar. They only serve and sell beer. You can bring your own food and hang in their lounge area. They also have some outdoor seating. its off the beaten path a bit and isn't much to look at, but great beer!

Located in the back alley of an industrial area, I was used to how this vibe felt upon driving up. Patio and corn hole outside. Good amount of bar, picnic table and high top seating inside. Can see the brewery works through a window. Free popcorn. They get food trucks regularly. Service was friendly and prompt. I got a flight of all 12 beers and one cider they had available. All were solid examples of their styles. A little IPA and stout heavy for my taste but all well made. Sampled their house made gin and vodka. Both were good. Happy to see this added to the Lansing area!

My wife and I and another couple went here to try their beers since we had heard so much hype about them. This brewery is located in the rear half of an industrial-style building that is situated on a dead-end street just off of busy Grand River Avenue. Only a small sign at the front of the parking area was noticeable to announce our arrival. Grain bins at the far end of the parking lot confirmed that we were at the right place.

The taproom consists of a series of long tables and a bar with 8 stools, and this space is open to the industrial-like brewing area. A small room is partitioned off just inside the entrance, and this space will be the micro-distillery once it gets started. We ordered a sampler flight of 7 beers of the 11 that were available (two wines and a cider were also listed on the menu). All of the beers were brewed very well to style, and we rated them in a range of 3.5 to 4.0 (out of 5). The Tiramisu Stout and the Crescent Fresh IPA were the notables, but all of them were very tasty. One thing that we noticed that I hope the brewery can do something about eventually was that the taproom was warm on a hot day, and the beers warmed up way too fast to enjoy all of the various styles at the proper temperature.

There is no food here, but snacks are available. The experience was good, but all 4 of us in our group decided that we had liked the beers a little better at Lansing Brewing, contrary to most all opinions that I've read in the BA threads about these two breweries. We'd go back again in the future, but it would ideally be a cold day so that the beers can be enjoyed at proper temps.

Warehouse district style. About 12 varieties at a time. They usually have a couple of wines and a cider.

Beer is above average overall. They have a couple really good stouts, IPAs are only decent.

Not what I would consider a "cool" place, tucked in a bunch of warehouses. Quality, selection of brews all excellent. Service was good, knowledgeable server was a plus for newbies. I'm familiar with all their beers, and all in my flight were excellent. Nice variety as well.

What a pleasant surprise! Definitely worth a stop in East Lansing. A wide variety of well brewed beers served in a pleasantly industrial space - with a real brewer present, both willing and able to discuss his beers! Nice teamwork behind the bar and above all, far better beer than anticipated. Would recommend visiting.

Seemed like there was still a bit of finishing going on inside the building so I'm sure the vibe will get better. Not a huge space but not tiny either.

Service was decent and will improve once the employees are more comfortable (probably all still new to them also). One of the people we went with was served out of a glass with a huge crack which could be a problem.

Most importantly was the beer. Tasted 7 of the brews on tap at the time, all were above average to excellent in my opinion except their Pale Ale. They definitely know their way around stouts. Big Toads DIPA, and Sloppy Seconds session IPA were damn good hoppy offerings.

Can't wait to see what the future holds for Ellison, they've set the bar for the Lansing area in my opinion. Will be back soon.

Will quickly become the best in East Lansing, not that there is any competition. The standard micro in an off to the side light industial area. Enough space, looks like they were not without funding, plenty of opportunities inside going forward.
The key being the brewer bringing experience from Kuhnhen. First try of the stouts, loaded with flavor. Expectations are high.