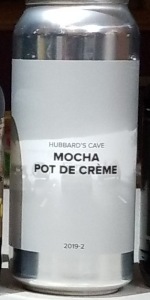 Appearance: 4 - pretty durn black. No head at all.

Nose: 4 - plenty of stout, but not much else. Maybe some vanilla.

Mouth: 5 - velvety smooth and thick. Still feels like I have it in my mouth even after I swallow.

Overall: 4 - I mean, all their stouts are pretty much the same. Certainly decent drinking, but I don't need to overpay for these anymore.

Can courtesy of BigTimeADL
Look: black with thick brown head.
Smell:chocolate, tootsie roll, vanilla.
Taste: Hershey’s chocolate syrup, marshmallows, vanilla, trace warming booze on the way down.
Feel: pretty full. Not too thick or viscous. Goes down ez.
Overall: not sure if a “pastry stout“ but definitely dessert themed.
High abv not apparent, and it’s not too sweet so warm pretty high marks. No mention of barrel-aging and none apparent.

Pour from can, near black, tiny beige head, no retention, slight lacing. Nose loaded with chocolate, vanilla. Tastes like candy, some coffee, no hint of booze. Huge body.

Pours out dark brown, almost black like motor oil. A finger of dark brown head formation. Strong lacing. Nice even coating on the side of the glass. Bubbles fade fast though.

Nose is fresh coffee and vanilla. Like a diner opening up for the morning. Chocolate comes in quietly underneath. But fresh pot of coffee notes take control almost entirely. A pleasant smelling brew.

Taste is more chocolate forward than the nose. Coffee still very persistent. Providing a rich black coffee experience. Bitterness from the coffee team up with the malt to make a nice roasty flavor. Vanilla sweetens and brightens it up just a tad. Compared to the nose though, I'm a little put off. It doesn't have the same impact. While it's certainly not bad, I expected more.

Mouthfeel is rich and creamy. With lactose being present this poses no surprise. Very low on the carbonation. It's a brief sharp burst of bubbles and then instantly gone. A common thing with dense stouts. The flash and fade of the carbonation like lightning on a warm summer night. While rich, it doesn't sit too heavily and it doesn't create a sticky, cloying sensation.

I believe this is my fifth or sixth Hubbard's Cave brew. This one is another good entry but doesn't wow like the rest have. They use a very distinct malt that I've come to recognize from them and it fits with a lot of their other brews, but for this one it feels like it falls short. So far this is the least interesting in my opinion, but when they consistently make absolute knockouts, it's not saying much.

Pours dark, nearly black. Smell/aroma is the only weak point here - slight roasty and sweet. Taste of chocolate and vanilla with a hint of coffee. Mouthfeel is just right. This is an outstanding beer that rivals many barrel aged stouts I have had in the past. I want more !!

Opened one again tonight. I just love this stuff If I had access I'd buy a bunch and they ain't giving it away at $16 a 2 pak ! BA shows it as retired but their site shows it as available.

Drank from a 1 pint can purchased at Yankee Spirits, Sturbridge, MA
2019-1
Served in a tulip

Viscous, absolute pitch black appearance. The motor oil-like body was capped by a super tight and creamy, half-finger tall, saddle brown head that fell to a thin, lasting collar. A blanket of spotty lacing cascaded down the glass after every sip.

The nose was a total mocha bomb. Huge creamed and sugared coffee presence. Chocolate notes came through strong as well. Nice mix of super rich and fudgey dark chocolate and smooth milk chocolate. Lactose notes were also quite apparent. As the beer warmed, the chocolate continued to intensify.

Mocha notes came through big time in the flavor profile as well. Loads of roasted and caramel malts on the front end. Coffee appeared next. Medium roast coffee perhaps. Rich chocolate fudge notes were also apparent. Nice milky lactose quality. Vanilla was noticeable in the center. More roast on the back end and the finish. There was a slightly metallic quality initially, but this disappeared rather quickly. Kiss of booze. For 12% ABV, however, the alcohol was surprisingly restrained.

Rich, thick, full bodied mouthfeel. Uber creamy and smooth. The liquid contained a fine, moderate effervescence that fluffed up beautifully on the palate. After a few sips, the sugars in the beer left a sticky film on my lips.

Tree House are masters of the adjunct milk stout game, but this Hubbard’s Cave beer was as good, if not better, than anything they have released. Both the chocolate and coffee notes were off the hook, and the 12% ABV was nearly undetectable. I am shocked that this brewery still manages to fly under the radar.

Hubbard's Cave Mocha Pot De Crème, 12% ABV. Pours deep brown/black, with a half-finger brown head. Nose is mocha, lactose, and vanilla. Taste follows, quite sweet but short of cloying, almost no bitterness. Excellent mouthfeel, overall world-class. Many beers are touted as chocolate bombs, but then you only get a faint hint of chocolate. No doubt here, really incredible, though some may say it's too sweet. I knew it would be good when the last dregs from the can looked, poured, and smelled like Hershey's chocolate topping. Basically chocolate with imperial stout added.

Fantastic firm head production. Retention starts solid, lasting for a long while, but once it fades, it disappears nearly completely.

Flavor follows, leading with coffee, but quickly giving way to the impressively strong chocolate. Decadently sweet, with notes of brown sugar, syrup, and molasses, with the vanilla and chocolate both contributing to the sweetness. Absolutely wonderful coffee notes, with dry roast bean flavor lasting throughout the entire sip, complementing the sweetness. Minor notes of char and red grape.

Smooth, creamy, full bodied, nearly chewy. Fills the mouth in a really unique way, almost as though a small sip expands. Mild warmth, but no bite from the alcohol.

4/30/19 (Chicago): $7.89 plus tax 16 oz can purchased 4/18/19 at Beer on the Wall, no canned date on can, poured into snifter. Dark black pour, light tan head dissipates quickly leaving nominal lacing. Very rich roast coffee and chocolate aroma, balanced. Excellent tasting stout, rich coffee taste is outstanding, back by a creamy rich chocolate. The lactose provides extra creaminess, the vanilla subtle, just the right balance. This is one of the richest, creamiest stouts I have taste, the mouth feel is very special. Mild carbonation lingers, rich, smooth, very easy drinking. The ABV is well masked, strong at 12%, but easily crushable. Excellent work Hubbard's Cave, another reason I love hitting up this brewery and Une Annee!!! Keep them coming!