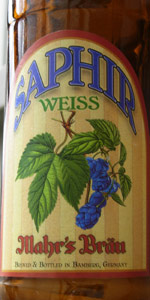 Interesting beer. I was expecting a straightforward weiss beer with Saphir hops but this has some caramelish malt to it as well. It's a cloudy amber beneath a massive head of off-white foam. It looks like a light colored dunked weizen. The aroma is caramelish as well, but the typical banana and clove yeastiness is there too. What I'm not finding in the aroma are the Saphir hops. There's some, but not much. More appear in the flavor but I've never found Saphir to be more than just another floral "noble hop" with a hint of citrus added in. It has an orange and apple fruitiness to it, and, of course, banana. Other than that the Saphir doesn't really stand out, obviously hindered a bit by the firm, caramelish maltiness. In the mouth it's medium bodied and quite effervescent. It's nicely balanced if a little bit on the malty side, and it's pleasant and satiating. Definitely different, and certainly worth trying because of it.
Review# 6,217

Par for the uneven, oddly laid-out course. I recently conducted a horizontal of Mahr's beers, only to discover this one on the shelf after the fact! Grr. Ah, well, no time like the present, as my Pappy always liked to say.

I cannot envision a more agitated beer. It is a Hefeweizen, but when I chilled it, I noticed a heavy sludge of lees on the punt! Knowing that this would never do, I agitated it repeatedly to get the yeast back into suspension. Of course, this nearly caused the cap to Pop! off of its own accord, so I had to allow it to settle again before I Pop!ped the cap. Once accomplished, I upturned the bottle (!) into a large Weizen glass that I keep on hand for just such occasions. Man, did the foam come up! I had over three fingers of foamy, light-tan head that rose up & sat back down, becoming soapy wisps. The color was a muddy, murky, Deep Amber/Light Copper to Copper (SRM = > 13, < 17). Nose smelled like a monkey was down a sewer pipe, having bananas for lunch. The reference to sewage had to do with the color, not the smell. Mouthfeel was rather thick & full, just what I needed after breakfast. Is it too early to begin blowing chunks? The taste was reminiscent of one of my earliest successes as a budding baker. I was taking Basic Foods (Foods 1) in HomeEc in high school & my kitchen forgot to secure our bananas for a Jell-O mold properly (we were actually pretty good for that sort of thing). Here comes the Thanksgiving Break & our kitchen smells heavily of bananas. The teacher went bananas & we were tasked with finding some means of disposal (other than the S/C) before the break. I was one of the few who actually read both the textbook & the cookbook, so I hit on the idea of Banana Bread. Not only was our project approved, but each of us got to take our loaf home for the holiday dinner! This beer was like liquefied banana bread. Loads of bready yeast & malts combined to make something that would make a monkey ecstatic. Sheesh! I prefer the clove esters, but it is about the style, not about me. Finish was semi-sweet, very bready & banana-like, but not overly sweet, which would have caused self-defenestration for me. Not bad, but still, not my cuppa tea.

Murky, orange-amber colored with a thick, creamy, white head. Sparse lacing. Interesting aroma, getting a lot of green apple with mild banana and clove. Fruity flavor, mostly apple or pear, with a bit of spice at the end. The yeast is definitely strong in this one. Lively carbonation, yet very soft and smooth on the palate. Medium bodied. An unusual hefeweizen overall, I'm not too into it. I definitely prefer them to be a little lighter in body and color without any hop presence.

Decanted from 16.9 oz (500 ml) bottle into a conical pint glass.
A: Pours a hazy, orange to amber color with a two to three finger, foamy off-white head, ring retention and limited lacing.
S: Aromas of banana, cloves, and pear.
T: Semisweet and fruity. Palate largely follows the nose, but spicier. Bitterness balanced into the mix to where it is a strain to notice it.
M: Medium bodied with solid carbonation. Creamy and smooth.
O: Really drinkable and enjoyable. A nicely balanced Hefeweizen.

Poured from the bottle into a wheat ale glass.

Very nice simple nose. Spicy lemon and tropical hop notes, followed by a classic banana estery component. Subtle but with a hop presence that dominates. A bit unexpected for a hefe but a good nose.

Very nice palate. Light bodied but soft enough malt depth and easily coats the flavors on the palate. Hop forward once again, almost a tropical wash of pineapple slightly in the mid palate. Aftertaste follows classic banana aromas, with a bit of herbal oil hop content. Hops are definitely prominent more so than the malts or even the yeast.

A nice different take on a hefe, and a unique hop angle that fits in for the base style. Just a bit unexpected to find a hefe that's hop forward, but this works out.

This hefe weiss is like none I've ever had before. There is this unusual funk smell and taste to it. If this is the Saphir hop edition doing this then what an unusual hop it is. I can't decide if it's good or bad. For true to style it sucks, but for being different its pretty dam good.

Definitely on the hoppier side for a hefe, leads to some weird and clashing flavors here but not bad. Wish some more of those banana/clove esters were a bit more potent. Taste is more about that lemon/herbal/ /wheat thang. Interesting take on the style but kinda on the meh side compared to many other German hefeweizens.

A - Hazy dark gold/orange. Fluffy white head that falls quickly, but a small portion stays around. Plenty of yeast in suspension make it very hazy.
S - Hefe yeast is dominant, especially with the spice/clove aspect. There is also some banana and a little hint of orange. Doughy malt is in the background.
T - Yeast flavors are more subdued in the flavor, but follow the nose. Doughy malt comes to the forefront. Hops have a tea-like quality to them.
M - Fairly dry, but maintains a medium body without being sweet.
O - Not as flavorful and lively as Weihenstephaner. Also, I didn't get the saphir hops as much as I was expecting. Still, it was a refreshing beer and certainly not a bad choice for the style.

I think my bottle may be old...a sweet bomb that's overcarbed.

On tap at Shelton Brothers The Festival 2014 held at Crafted in San Pedro, CA.

Pours a murky golden-orange with a foamy tan head that fades to nothing. No lacing on the drink down. Smell is of grain, wheat, caramel, banana, and earth aromas. Taste is much the same with caramel, banana, and earth flavors on the finish. There is a mild amount of earth bitterness on the palate with each sip. This beer has a lower level of carbonation with a slightly crisp mouthfeel. Overall, this is a pretty good beer with a nice hop presence to go along with traditional hefeweizen characteristics.