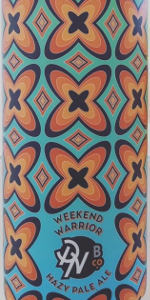 Pours with a big tight fluffy head.
Smells like a tropical orange hop
Taste is slightly sweet orange mango-ade with a bit of bitterness in the finish. Body feels just right.
Overall a nice beer I would like to try a bit more fresh. As it warmers up this will be a nice porch drinker. Not a big fan of haze but this was nice.

3.5/5  rDev -10.5%
look: 3.5 | smell: 3.5 | taste: 3.5 | feel: 3.5 | overall: 3.5
Brilliant gold, bright white pillowy head. Featuring two of my favorite hops--Citra and Idaho 7--this pale ale borders IPA hop aggression. Very lively, well-carbonated, double-dry-hopped citrus and tropical fruit flavors. Not complex, just straight down the middle enjoyable and refreshing. A good-to when you're having more than one.
May 27, 2021
Rated: 4 by SiepJones from Pennsylvania

Reviewed by timobkg from New Jersey

Aroma is primarily of mango and pineapple. It nails that NEIPA aroma, despite being a pale ale.

Taste is full of tropical fruit, with those mango and pineapple notes coming to the front, balanced by mild bitterness and a clean finish. By taste alone I'd peg it as a NEIPA, and a darn good one at that.

It's rich but finishes cleanly, and invites you to take another sip. It's good that it's only 5.8%, because it's very drinkable.

Is it a pale ale? A mislabeled NEIPA? Is a "hazy pale ale" just a NEIPA at a lower alcohol level? I don't know, but whatever it is, it's really tasty, and shows that you can nail all those delightful hop notes and flavors without making an 8% beer. In fact, it overshadows many 8% NEIPAs I've had recently. Double Nickel totally nailed this beer, and I will definitely be getting more the next time I'm at the store.

3.78/5  rDev -3.3%
look: 4 | smell: 3.5 | taste: 4 | feel: 3.5 | overall: 3.75
Poured from a can, it looks like carbonated pineapple juice. Moderate initial head that didn't quite last the ten minutes it took to finish. Nice lacing throughout, however. The taste is a bit thin for its style, but a forward hop bitterness saves points for me. The mouth feel isn't among the better hazy beers. Perhaps slightly better than mediocre overall.
Jun 13, 2020
Rated: 3.81 by artiefufkin from New Jersey

Notes via stream of consciousness: Wow, $2.99 for a big can, that's a good deal for a beer that's double dry-hopped with Idaho 7 and Citra hops. I love that it fills my Imperial pint glass. I didn't even get pints this full in England. Anyway, it's poured a very hazy golden body with some orange to it beneath a short head of white foam. I'm sure I could have coaxed more out of it with a rougher pour but I wanted to see if I could fit it all in. The aroma is resinous with plenty of tropical fruit and a touch of earthiness and sweet pine.
The flavor is even hoppier than the aroma lets on. I'm finding notes of tangerine, mango, peach, sweetened grapefruit, mild apricot, pine, dusty earth, and tea leaves. The malt is fairly basic, which is good for showing off the hop flavors rather than having them compete with caramelish notes, and it's sweetish but not too sweet. It's also solidly bitter and it finishes dry with lingering bitterness, fruit, and pine. It's interesting to me - this just occurred to me - that with Citra in it it's not really that citrusy in comparison to the other orchard and non-citrus tropical fruits there. So what's the strength on this? 5.8%? Jeez, I thought it was stronger than that, it really has an IPA vibe to it. Of course I have seen NEIPAs at 5.8% so I guess it's just a matter of what you call it, and with that in mind I think I prefer the pale ale moniker as it should let you know it's not that strong. Hmmm, maybe the solid bitterness threw me off as well, but OK, let's wrap it up. In the mouth it's medium bodied and gently crisp. I'm not sure how they're doing it, but Double Nickel beers always seem to have a very fine-bubbled carbonation. Maybe they're sounding their tanks, or just going more with top-pressure to carbonate rather than through a carb stone. Who knows, and what does it really matter? Overall I'm really enjoying this. They generally put out really solid hoppy beers and this is one of them. I'm really glad I bought a couple of four-packs of this one - we've still got a month and a half of hot summer weather to get through and I think this will be perfect with a little less alcohol than a lot of IPAs that pack the same hop punch.