The Commodore and the Kitsune
Double Nickel Brewing Company 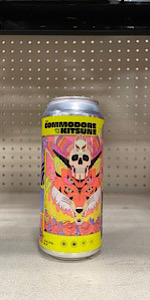 Notes via stream of consciousness: Interesting artwork on the label. It reminds me of manga. This is a collaboration beer as well, I think... there's a logo for DD4D Brewing & Clothing Store which is in Japan but no actual mention of a collaboration. It also says that Drew from Double Nickel is a direct descendant of Commodore Perry and thus this makes sense with the name and the label and everything. Interesting. So, it's a dry imperial stout "aged on Japanese cedar with a touch of Moshio salt." It's an opaque brown-black beneath a short head of creamy tan foam that recedes quite quickly. I can't see anything at the base of the glass but now that the head is gone I can see it's a clear dark mahogany brown where the surface of the beer meets the glass. That's dark! It smells like a stout, not to be a smartass, with chocolate and roastiness. There's some underlying fruitiness, and what might be the cedar but I can't really tell. Perhaps once I taste it I'll know. ... ... ... So... yeah, I think so. There's a definite cedar note to it. It's a little weird to be honest, of course that might be from the salt; I forgot to look that up ... ... ... it's derived from seaweed which makes sense. So what am I tasting? First I get dull dark chocolate, molasses, and then the cedar and underlying fruitiness step right in. Whatever the odd taste is it's right there in the middle with a little bit of sweetness. That's the odd part and I unfortunately cannot describe it. The only thing I can come up with is that it's something like clove. There's some more cedar, and the salt, and they remain into the swallow and beyond. It lingers lightly, but seemingly forever. In fact, I'm not sure that it's ever really left me since the very first sip. It's a very clean beer for being 11%, and although the alcohol is there it doesn't stand out. In the mouth it's medium bodied, and quite soft across the palate. I'd initially thought that the head dropped so quickly because of the alcohol, and that's probably true, but it's also got a very low level of carbonation to it. That's neither good nor bad, I'm just noting it. I think that the mouthfeel is fine. So what else is there to say? It's obviously well made. It's definitely unusual without being overdone. Points for creativity. I think it's a nice beer to sit down and relax with, which is probably a good thing given that it's 11%! I'm curious about this and I'll ask Drew about the DD4D connection if I see him this week and add that info.
Review #7,263
p.s. ~ I asked Drew about the partnership with DD4D and learned that that's my friend Michael Donohue who worked with us at Flying Fish. I had no clue.