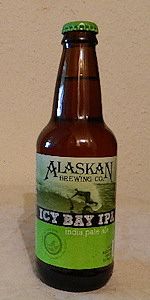 Notes: Alaskan Icy Bay IPA is made from glacier-fed water and a blend of Cascade, Bravo, Calypso, Summit and Apollo hops and premium two-row pale and specialty malts.

Reviewed by dcat151 from Georgia

Smell - Refreshing and bold but not overpowering hop. 4.5

Taste - Solid, flavorful, but not overpowering. Balanced, if a bit on the malty side, especially for an IPA. Interesting. 4.75

Mouthfeel - Bold, medium bodied but with a relatively clean finish that still reminds you that you just took a sip of a good beer. 5

Overall - Possibly the best in style I've had. 5

Reviewed by German-Helles from Wisconsin

3.82/5  rDev +3.8%
look: 4.5 | smell: 3.75 | taste: 3.75 | feel: 3.5 | overall: 4
This is a 12oz. can briskly dumped into the Alaskan pint glass. This ale is slightly hazy, straw colored, with two fingers of thick lumpy foam. The lacing is very thick and the carbonation is medium light.
The aroma is typical IPA pine and grapefruit, noticeable at a distance.
The flavor is very pleasant the dry pine flavor and a somewhat tart citrus, there is also a little sweet malt hidden in there.
I like these IPA beers that are not overly dry or bitter, they are very refreshing and more enticing to keep coming back for another sip. This is an easy drinker, very enjoyable!
This has been sitting in the back of the fridge for awhile, I wish I would have sampled it sooner.

3.71/5  rDev +0.8%
look: 3.5 | smell: 3.75 | taste: 3.75 | feel: 3.5 | overall: 3.75
Served on tap in a 16 oz (473 ml) conical pint glass at Stonehouse, Ranier Ave. South, at the the Seattle-Tacoma International Airport, Washington.
A: Pours a lightly hazy, light amber color with a one finger, off white head, with little retention and minimal Belgian lacing.
S: Aromas of caramel, honey, and light orange.
T: More semisweet than semidry. Palate follows the nose with no more than slight bitterness throughout.
M: Light to medium bodied with moderate carbonation. A tad watery.
O: Easy drinking and enjoyable.

The taste is absolute, pine and grapefruit with a slighty malt finish, and a lil kick of caramel/malt to let you know that it's a gourmet, craft brew with variety..

The aroma gives off a clean dry crisp tangerine, candied low key toffee, with a citrus fruit that makes this IPA go down so smooth...

Probably in my top 5' IPA'S of all time, and I'm proud as hell to be from the same state as this clean/crisp-- all around, kick'ass IPA....A matter of fact the only other IPA that stands up to this one would be from those West Coast beer/hipsters at Langunitas!!! There IPA ain't no joke either!!! Lol.

Sitting at 6.2% this crispy/crisp IPA is a home/run!!! One of my all time favorites indeed!!! No alcohol burn, no issues...One of my first and all time loves!

Pouring this beautiful IPA into my 16 ounce tulip Libbey Belgium glass, I'm a happy man..Especially the fact that I always get a beautiful, 2 finger thick/cloudy head.

Reviewed by barneyrubble from Colorado

T- Bitterness on the tongue then a short lived touch of malty sweetness that dries quickly with a light astringent finish, and a pine bitterness.

O- I did not have any expectations for this beer. It has an interestinge balance between hop and malt, but eventually leans to far to the bitter side for my tastes.

Reviewed by tryptagon from Missouri

F: Coats the tongue, which begs for more sips.

O: Not the most intense of IPA's, still a solid contender. Enjoyable, slightly sweet, slightly bitter.

A: A slight haze over a light sense of orange coloring. A dull bone white colored head is foamy, rocky, and slight in size, with a weak cohesion factor. Small delicate lace patterns weakly hold to the vessel walls. From tap, a soft sense of carbonation which hardly disturbs the head above, which has since fallen rather quickly. Moderate looking by style.

S: The aroma to me was faint, a bit homogenized, in the sense was hard to pick out defining characteristics, or strong points. Dull citrus, light orange peel, maybe some semi-dry pine resins. The strength was a bit underwhelming, as well the complexity. I’m guessing not a lot of aromatic hop usage or the beer was particularly past its prime due to the current situation and lack of tourist industry in region, as well as being so far out of the way (Chicken AK).

T: The flavor followed the nose in expectations, rather homogenized, with no strong indicating factors. Dull and old citrus, pine, and hop floral were lackluster with no particular bright spots. Old, dry breadiness, soft orange peel, and a very monotonous level of hop progression.

M: Mouthful was okay, a bit bready, medium full, but really stopped there in terms of definition.

O: Overall I found the ibu levels to be underwhelming, as well the complexity. Funny as they claim to have multiple hops added to this (Cascade, Bravo, Calypso, Summit, and Apollo). I’m guessing to many spices cancel one another out, especially with similar qualities, and things get a bit muddled in the end. Very mildly bitter, unexciting drinkability, and one that can easily be forgotten. For the record I think a 3.5 is a solid beer that doesn’t disappoint, good for casual drinking without to much criticism. I found this to be a tad underwhelming and average at best. Their SMaSH Galaxy fairs much better with a single hop usage, with more taste and complexity, as well as bittering factor, drinkability, and excitement level and comes more regarded as a try then this.