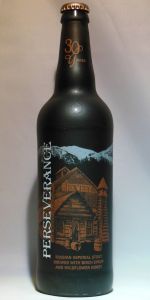 While I applaud Alaskan's 30th anniversary and appreciate their place among the pioneers of the craft beer movement, I'm not sure this is the fitting beer to celebrate the occasion. It's not bad but doesn't stack up with the barleywine or Baltic porter from their pilot series, both of which were excellent in my opinion.

In any case, this RIS takes cues from their famous smoked porter, with a generous helping of smoked meats obscuring the subtle floral notes of the wildflower honey. The birch syrup is a bit closer to the forefront, making an effort to balance the smoke with some botanical bitterness and a touch of sugar. Maybe I unfairly expect more after major, over-the-top anniversary masterpieces from some of Alaskan's contemporaries, but this doesn't move me in the same way. It is definitely distinctive, but it doesn't even approach the heights of their own more memorial efforts.

L. Outstanding darkness but quick to settle head and no lacing to speak off
S. A good rich smell to it, u can literally smell the alcohol
T. Rich with a touch too much bitterness. But chocolate and Malta abound
F. This is where this beer excels. Great velvety feel. Almost like its on nitro even though it's not.
O. With the exception of the mouthfeel, a decent stout, but honestly barely making my top ten of RISs.

Pours black with no head. Aroma is of roast, a bit of sweetened coffee, and wood. Sweet comes through -- that may be the syrup.

Taste is roast, cola, a sweet bitter fruit I don't usually expect in RIS. A molasses syrup presence for sure. Sticky without being too roasty. The syrup can almost be perceived as chocolate if you try hard and you really want it, especially now I'm getting nuttiness. Slight pine, slight hoppiness later. Booziness as well. Ends with roasted malt and smoke, moving this into Russian stout territory more than it starts out doing.

Feels heavy, resiny, a little too sweet for my taste. Your mileage may vary. Thin and sweet early, roasty and boozy late. Not bad, but perhaps lacking in golddust.

Very dark, like used motor oil. Mocha colored head quickly disappears leaving a thin ring around the edge of the glass. Smell is very good. Bitter chocolate, burnt sugar, caramel, booze, slightly nutty. Taste follows smell but with more coffee and the honey comes through. Birch syrup is hard to pick out. Sweet, to smokey, to bitter. Booze isn't as noticeable in the taste. Mouth feel is very good... Like a velvet sleeping bag for your tongue. Overall a solid example of a ris.

As it's now Imperial Stout season, I picked this up from the nearest bottle shop. Looked promising, and the adjuncts piqued my interest. (Drank from a tulip)
The beer sported a quickly dissipating cedar colored head. Beautiful looking thick black body, with a ruby hue in the thin bottom of the glass. Slight legs, no lacing.
Initially, picked up some ferrous sulfate in the nose, though it quickly was overwhelmed as the beer slowly warmed up. Huge roasted notes, and a somewhat over-present bready yeast character. No real honey or birch syrup detected, as the roasted character was fairly overwhelming.
To match the aroma, there's a huge roasted punch to the palate up front. Slight dark fruit taste coming through, along with a subtle sweetness. Bitter lingering end. Ferrous sulfate came out at first, but was again overwhelmed by the roast. No discernible birch syrup flavor, and no honey aftertaste.
Thin body for an imperial stout. The body's thickness did not match the sweetness, and was ever-so-slightly oily.
For an anniversary beer, this was pretty underwhelming, especially factoring in the promise of unique adjuncts. That being said, it ended up being a middle of the road imperial stout, whose downfall was an overuse of the wrong specialty grains. I've enjoyed Alaskan Brewing in the past, and will enjoy them again, but this let me down.

Thanks Bill. This was poured into a snifter. The appearance was a jet black color with a finger’s worth of tan head. Mild clingy lace. The aroma leads with a rugged sweet to roasty coffee bean and grinds with a bit of pizazz from some grassy hops. Dark bitter cocoa beans enter in with a touch of sweet fireweed honey. Light birch syrup. Then some smoke. The flavor leans towards the sweet side with a huge robust smokiness rolling all up in there. Semi-sticky sort of bitter to roastiness grinding into the aftertaste and strolling on into the finish. On the palate, this one sat about a medium on the body with a fair sipping grip sticking along my tongue. Carbonation still felt good. ABV felt as projected by the brewer. Overall, this was my second bottle and I thought both bottles were very well done with barely any difference.