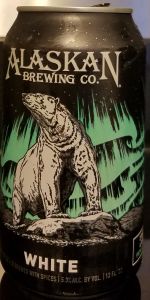 Notes: Alaskan White Ale has a soft, slightly sweet base with the unique spice aroma of coriander and crisp, citrus finish of orange peel. A light and effervescent body combined with the smooth palate creates a complex and delicate beer that is deliciously refreshing in any season.

12oz can, about a year and a half old

No head, golden, cloudy; smells like wheat and lemon, almost a skunky summer shandy. This one might have turned.. Actually the flavor held up: spice and bread, coriander and pepper, light and watery but substantial flavor - enough to delight me as I watch Jack Black get dismembered in The Jackal. Crisp and slick feel that ends dry and powdery.

Another solid Alaskan beer. Nothing special, but extremely well done averageness that holds up over time

One of my favorite white beer

O- Was expecting a bit sharper more spiced wheat, but it is smooth and not offensive even with the faint butyric acid taint. Not a repeat buy for me, though.

On pour, it is a cloudy golden amber with a very soft 1-finger thick fizzy head that diminishes into patchy islands rather quickly. It leaves behind a very minimal spotty lacing and as the beer sits, yeast sediment collects on the bottom. After doing some research on witbiers, I've come to the conclusion that it is a little darker than I expected, but I'm no expert. Yet. (Insert evil grin here).

The smell is first and foremost a very obnoxious mix of coriander and orange peel, and though not strong, it initially overshadows all of the other scents making it hard to pick any one out. What I thought was a hint of caramel turned out to be the sweetness of the wheat poking through, followed by a light lemon and thyme type of concoction, and a touch of yeast. Again, it's not a very robust or powerful combination of aromas, but the coriander and orange peel steal the show here.

Leading into the taste, the coriander and orange peel are again in the forefront, leaving little room for a light lemon tartness, a tangy sugary wheat, and the swishes of yeast that quickly passed over my taste buds. The Alaskan White is almost spicy from the prickly carbonation and ends on a lightly dry finish. It is light-bodied and smooth, almost creamy, with a clean finish that isn't quite as crisp as the smell. And though there are lots of grains (which I read are more common in American wheat beers), there are practically no hops present in either the smell or the taste, which left it quite "lackluster."

While this brew is rather easy to drink, it most certainly borders on average - at least until the coriander and orange peel stop trying to beat everything else up. As far as I'm concerned, this beer is just short of the depth and complexity and missing a certain light fruitiness that is supposedly common in the witbier style. With all of the spices overshadowing everything, this almost tastes like it wants to be a holiday-type drink, and would probably be best enjoyed paired with a salad covered in rosemary vinaigrette or lemon and a white fish.

Pours a light golden color, almost white. The head is white, but minimal when poured from the tap. The nose is non existent. I get nothing from it. The taste is, well, minimal. There's just a slight citrus flavor. The feel is more watery. I don't know about this beer. It is ok, but not more.