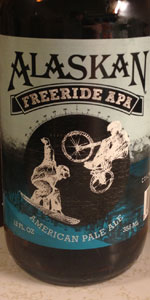 This is a rather boring apa. Not a whole lot of flavor - there is some honey and some citrus. Body feels a bit weak and flavor profile is meh. Forgettable - skip it if you have the chance.

Pours a clear honey amber with a large white cap that leaves very nice lacing as it fades. Aroma is faint corn and malt, very little hop. Flavor follows the nose although a bit more forward. Feel is light bodied and well carbonated. Overall an okay beer but not worth seeking out.

Poor experience with this beer. It was close to a year past best by date, so maybe that’s it. Hopefully can try a fresh one sometime

Poured from a bottle into a pint glass. It's a nearly clear (slightly hazy), honey color, with an unremarkable, relatively thin head. It has a clean, simple taste, with greater hop presence than the average pale ale. Somewhat piney. It seemed a bit too bitter when right out of the fridge, but it has mellowed upon warming up. The malts are not particularly assertive, nor are they over-roasted, resulting in a mild, refined taste. Overall, it's in the average range for pale ales, without anything exciting or offensive. Reasonably easy to drink.

Pours that color of golden with just the slightest uptick of SRM with some light amber in there too. Nice 1/2" white head. Its a good looking "beer" that looks like "beer" according to what that friend who doesn't drink much "beer" says. Aroma knocks some dry hop citrus notes.

Taste is good, bitterness restrained, plenty of hop kick, citrus notes, lively carbonation, good toasted pale malt that doesn't wade into caramel territory and become something heavier and thicker than it should, even if it is made in Alaska. Easy to drink, nothing heavy or excessive, but I would have preferred if they put a guy skiing instead of snowboarding on the label.

Pours a somewhat hazy golden orange and has a one finger white foamy head, slightly clingy light foamy lacing, leaves some rings goin’ down; the aroma has a strong sort of strong citrus, pine and floral aromas up front, just a tad of peppery spiciness that seems to be combined just right with a slight maltiness, I’m impressed; the flavoring is mainly bitter and spicey, sweet citrus aftertaste, zesty orange dry finish; its pretty easy on the palate and somewhat sessionable, carbonation seems adequate for the style and perhaps just a bit sharper than most APA’s for me, still enjoyable; overall, it has what it takes to be a pretty well done APA that can hang with the best of them, well worthy of buying again.

Traded for this a while back and finally got around to it on this rainy night. The date on the bottle was 2/4 but this didn't taste skunky or old but at the same time, this was one of the weaker American Pale Ales that I've had in ages. Still, it was good to have an unassuming beer that went down easily and this certainly fit that bill!

The pour to this was the best aspect of this beer as the hazy apricot hue and moderate head were quite pleasing for something out of a bottle like this. One big ring of lacing remained on top of my pint glass as there was another one not too far below that. Grass and caramel malt were strong in the nose with much of the latter in the taste. Light citrus and tropical notes were present on top of that with some grain in mouthfeel that gave this nice body. Not overly sticky or full of resin, there were just enough hints of those to serve as a reminder that this a Pale Ale as the finish was crisp and slightly sour along the lines of mint and grass.

With not a lot of alcohol to be found here, this was a beer that went down relatively easily while feeling like a session brew. This wouldn't be something that I'd buy again but if someone offered me one, I'd gladly take it. Once in a while, it's just nice to kick back and enjoy something without having to be bombarded!

Freeride APA from Alaskan Brewing Co.
Beer rating: 84 out of 100 with 642 ratings